The U.S. embargo, unsupported by any country in the world, harms the nation’s ordinary working people. 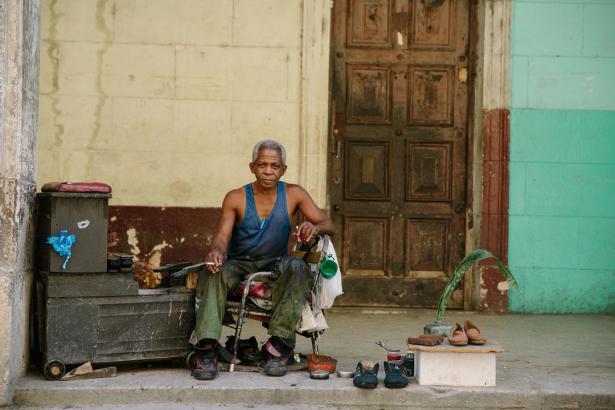 HAVANA—Chef Alexis Alvarez was in panic mode. He was preparing a gourmet meal for visitors from the United States when the electricity went out. He mostly cooks with natural gas and charcoal, but those won’t power his blender full of organic kale.

So Alvarez found a very Cuban solution: He slipped the blender into an old sack, walked over to the nearby hospital that had electricity, plugged in the blender, ran it for ten seconds, and then left. Presto: a healthy and tasty iced drink.

Alvarez is one of a growing number of food entrepreneurs reinventing Cuban cuisine and expanding the private sector, precisely the kind of person U.S. policy is supposed to benefit.

But he blames the electricity shortages on the fifty-eight-year-old U.S. embargo. Last year, for example, the Trump Administration sanctioned Cypriot and Panamanian tankers bringing oil to Cuba’s power plants, which, in turn, cause electricity blackouts.

The U.S. embargo on Cuba, unilaterally imposed in 1962, isn’t supported by any country in the world. For the past twenty-eight years, the U.N. General Assembly has voted overwhelmingly to oppose the embargo.

Alvarez also faults Cuban authorities for the periodic shortages of consumer goods, ranging from canned tomatoes to toilet paper. Trucks with enough fuel can’t seem to consistently pick up the goods and deliver them to the right stores.

“It’s bad administration,” he tells me.

But for Alvarez and every other Cuban I interviewed, the ultimate villain is Donald Trump.

After the collapse of the USSR in 1991, Cuba was cut off from its main trading partners and Soviet economic subsidies. From 1989-93, the Cuban GDP plunged by 35 percent. By comparison, at the nadir of the Great Recession in 2007-09, the U.S. economy shrank by 4.2 percent.

Over the past thirty years, Cuba has instituted a series of policies that try to balance socialism with market reforms. The Cuban government continues to control major industries, maintains free health care and education, and promotes high-quality, subsidized cultural events.

But it also eliminated no-show government jobs and encouraged employment at small businesses such as restaurants and bed and breakfast lodging. Today, the government provides 68 percent of jobs and the private sector 32 percent.

The Cuban economy experienced a relative boom after President Barack Obama regularized diplomatic relations in 2015. U.S. travelers flooded into Cuba, giving a boost to hotels, restaurants, and the entire tourism industry. As recently as 2018, I saw fifty tour buses lined up in Havana to receive U.S. cruise ship passengers.

But by 2019, Trump reversed many of Obama’s administrative changes. He banned U.S. residents from staying in Cuban government hotels, eating in state restaurants, or utilizing government tourism agencies.

But Trump continues to squeeze the Cuban economy by threatening European banks and corporations doing business with Cuba. For example, Trump has allowed Cuban Americans whose property was nationalized after they fled Cuba in the early 1960s to sue European companies now doing business in those buildings.

The Trump Administration also wants to stop Cuba’s support for the Venezuelan government of Nicolas Maduro. Cuba provides doctors as well as military advisors to Venezuela, and Venezuela ships oil to Cuban refineries. Trump’s policies are aimed at breaking Cuba’s solidarity with Venezuela, says a U.S. reporter based in Havana.

Such pressure “has never worked before,” the reporter tells me, “and it’s not likely to work now. The embargo hits ordinary Cubans—not the government.”

Canadians and Europeans continue to visit Cuba. But the drop in U.S. tourism since the middle of last year means less hard currency to buy foreign goods. Sanctions against third country tankers reduced oil shipments, increased prices at the pump and led to shortages of transport to get food into the cities.

Last July, Cuban President Miguel Diaz-Canel announced plans to raise state worker salaries, eliminate the dual currency system and encourage provincial self sufficiency in food production. The plans are a work in progress, and their effectiveness remains to be seen.

But one thing is for sure. The U.S. embargo hurts ordinary Cubans while failing to change Cuban government policy. Cuba’s best hope for economic improvement depends on regime change in Washington, D.C., this November.

Reese Erlich’s nationally distributed column, “Foreign Correspondent,” appears regularly in The Progressive. His book The Iran Agenda Today: The Real Story from Inside Iran and What's Wrong with U.S. Policy ­is now available. Follow him on Twitter, @ReeseErlich; friend him on Facebook; and visit his webpage.