In Somalia, an Unprecedented Effort to Kill Massive Locust Swarms with Biocontrol

In recent months, the Horn of Africa has been invaded by desert locusts that have consumed food crops and pasture. For Kenya, it is the worst infestation in 70 years. 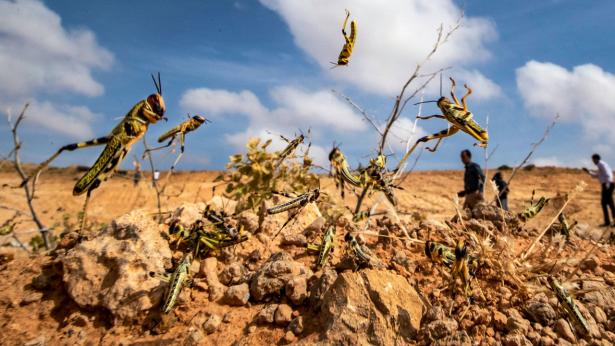 Young locusts, such as these in northern Somalia, will be killed by a nontoxic biocontrol fungus before they swarm., AP Photo / Ben Curtis

Somalia, one of several African nations being hit hard by enormous swarms of locusts, is planning to control them with a fungus in what would be the largest use of biopesticides against these insects.

“Large-scale use to control an invasion of desert locusts would be a first,” says Michel Lecoq, a retired entomologist who worked on locust control at the French Agricultural Research Center for International Development. “If successful, it will be a big step forward.”

The moment is crucial, because the next generation of locusts is now maturing and could devastate crops planted at the end of March. “We have a short window of opportunity to act,” Dominique Burgeon, director of emergencies at the Food and Agriculture Organization of the United Nations (FAO), said at a briefing Monday in New York City.

In recent months, the Horn of Africa has been invaded by desert locusts that have consumed food crops and pasture. For Kenya, it is the worst infestation in 70 years. One swarm there was estimated at 100 billion to 200 billion locusts, marauding through 2400 square kilometers. FAO warned again this week that the insects pose a severe humanitarian risk, as nearly 10 million people in the affected area already face food shortages because of recent floods and droughts. “We simply cannot afford another major shock,” Mark Lowcock, United Nations under-secretary-general for humanitarian affairs and emergency relief coordinator, said at the briefing. “Time is running out.”

Several factors caused the massive outbreak. In May 2018, a cyclone hit the desert “empty quarter” of Oman, Yemen, and Saudi Arabia. After the unusual rainfall, vegetation flourished, and the well-fed locusts increased their population 400-fold over 6 months. Normally, the populations would shrink when plants die after the desert dries out again, and timely control efforts can prevent populations from booming.

In this case, however, a second cyclone hit in October 2018 and the population continued to increase—an estimated 8000-fold by March 2019. The locusts headed to southern Iran, crossing territory that hadn’t seen the insects in 50 years, and moved east into India and Pakistan. Last summer, many flew south with prevailing winds into Yemen, where civil war prevented any spraying of pesticides. The swarms moved to Ethiopia and Somalia in October 2019.

Compounding the problem, yet another cyclone unexpectedly hit the Horn of Africa in December 2019 and more breeding ensued. By the end of that month, growing swarms had entered Kenya. They reached Uganda and Tanzania in the past few days.

Tackling large locust swarms is challenging and requires fast-acting chemical pesticides sprayed from aircraft. Ethiopia and Kenya are now spraying those chemicals. Although the pesticides break down within 1 day, villages must be warned to temporarily move their livestock.

In Somalia, which has large grazing areas, FAO is instead helping the country use biopesticides. They consist of spores of the fungus Metarhizium acridum, which produces a toxin that kills only locusts and related grasshoppers. Since the last major locust outbreak in Africa, in 2003–05, researchers have been able to make the biopesticide cheaper, more effective, longer lasting in the desert, and easier to store. “We’re really lucky now that we have a very effective product,” Keith Cressman, FAO’s locust forecasting officer, told ScienceInsider. Compared with chemicals, however, the biopesticide takes longer to kill the locusts, so it is more useful before the hopper bands of young locusts have begun to fly.

Such biopesticides have previously been used in several countries to stamp out locust outbreaks. In the past 3 years, China has applied biopesticides on more than 48,000 hectares annually, says Long Zhang of China Agricultural University. The main challenges are finding the bands of young locusts and hitting them with enough biopesticide, he says. “If the dose is too low, it will take a long time to kill locusts,” he says. Researchers in China have been selecting strains for greater virulence, but they still require that locusts to be exposed for several days longer than with chemical pesticides.

Last week, Cressman and others from FAO spent several days in Somalia discussing plans with the government. To help locate and spray the locusts, FAO is recruiting technical advisers from West African countries experienced in controlling outbreaks. They will also bring in backpacker sprayers and larger equipment that can be mounted on vehicles and aircraft. FAO has ordered 4 tons of the Metarhizium biopesticide, enough to treat about 80,000 hectares. Funding has mainly come from FAO’s emergency reserves, and more cash is urgently needed. So far, donors have committed about 28% of the $76 million needed.

Erik Stokstad is a reporter at Science, covering environmental issues.