Drivers from 27 different countries launched the International Alliance of App Based Transport Workers (IAATW); a rare case where workers who fall outside the scope of traditional labor law and union structures have been able to come together. 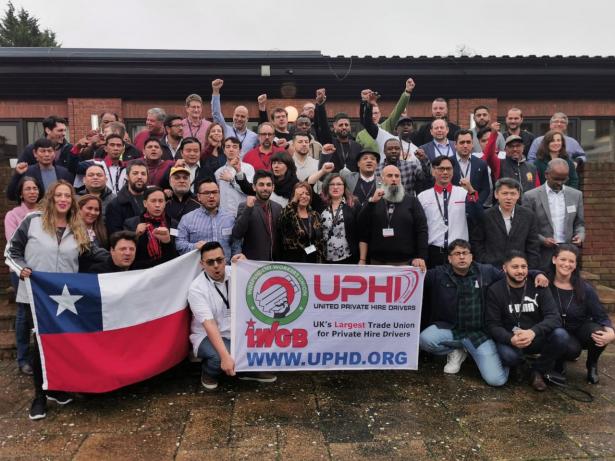 While Brexit signaled the UK’s apparent exit from all things international last week, the country’s union activists convened allies from around the world to go the opposite direction and build global solidarity. The organizers they brought together hailed from 27 different countries, and flew from as far away as Chile, Indonesia and Australia to be part of the gathering in Oxford, hosted by the UK-based United Private Hire Drivers Association (UPHD). At the end, they announced the launch of a new global network, the International Alliance of App Based Transport Workers (IAATW).

The 60+ drivers who joined this meeting, representing many thousands more, recognized that corporate power is global. Uber, Lyft, Grab and other ‘ride-hailing’ app companies claim they are just brokers, connecting drivers with riders, and not employers. They have long been at work to undermine local, regional and national laws and policies that they see as obstacles to their business model. As Mike Isaac documented in his recent book Superpumped, while Uber promotes a benign public image as part of the so-called ‘sharing economy,’ behind the scenes the company has “weaponized” a strategy to undermine municipal public policy in each market they enter, and destroy and replace local taxi and private car markets.

In last week’s event, drivers explicitly rejected terms such as ‘ride sharing’ and ‘ride hailing,’ demanding recognition that they are, in fact, transportation workers. Coming from different countries and different legal contexts they discussed and respected each other’s need to advocate for better working conditions irrespective of employment status. But they all agreed that app-based transportation companies have too much control and must be held accountable to the interests of drivers. This can only happen when drivers have a collective voice.

In the UK, UPHD was able to win employment status for its drivers through a prolonged and dramatic court battle. In California, advocates gained an important win, the passage of Assembly Bill 5, ending disguised employment for gig workers last year. But Uber and its ‘competitors’ in the industry are united in launching their full political arsenal to turn back these victories. They have filed legal action against French drivers who organized a nationwide action. They have appealed the UK court decision, and the case will move to the UK Supreme Court this year. And they have launched a $100 million ‘war chest’ in California to push a referendum that would overturn AB5.

And yet, drivers are organizing absolutely everywhere. In Canada, the UFCW had an unprecedented victory just last month, as drivers in Toronto voted for union certification. In France, a coordinated nationwide strike in late 2019 succeeded in completely shutting down Uber’s operations for a day. In India, drivers from multiple cities launched a new driver federation just a few weeks ago. Even in Bangladesh, drivers pulled off a 24-hour strike, and are building collective power to negotiate demands.

The formation of the IAATW is particularly notable and important because it is a rare instance where workers who fall outside the scope of traditional labor law and union structures have been able to come together and stand up a global network. A few years ago domestic workers did the same; beginning in 2006, grassroots organizations representing domestic workers in different countries began to connect and build an international solidarity network. Their organizing culminated in a powerful victory in 2013, with the adoption of a new global Domestic Workers Convention that finally defines domestic work as work, and has been a foundation for the reform of state and national laws protecting domestic workers. At the IAATW meeting, drivers discussed what it would take to win a similar international victory.

Drivers have much to gain from building collective power, but they are not the only ones. Local transportation markets are being destroyed and municipal regulations undermined. City governments, citizens and consumers have equally much to gain if labor power can to provide a check on the runaway predatory business model that Uber and other platform companies have exported around the world.

[Bama Athreya is an expert on labor, gender equity and workplace social inclusion, labor migration and trafficking. Interested in the intersection of tech and social movements.]