Every single study, regardless of ideological orientation, predicted that it would yield net savings. 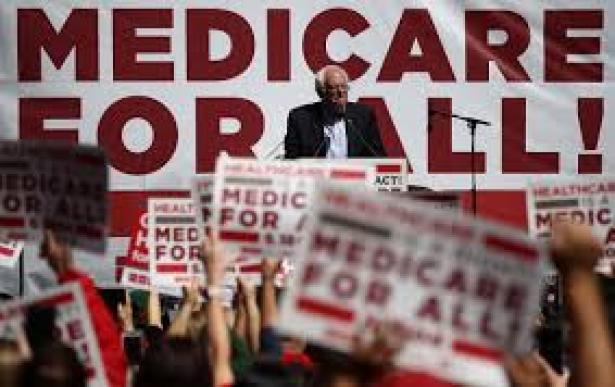 The evidence abounds: A "Medicare for All" single-payer system would guarantee comprehensive coverage to everyone in America and save money.

Christopher Cai and colleagues at three University of California campuses examined 22 studies on the projected cost impact for single-payer health insurance in the United States and reported their findings in a recent paper in PLOS Medicine. Every single study predicted that it would yield net savings over several years. In fact, it's the only way to rein in health care spending significantly in the U.S.

All of the studies, regardless of ideological orientation, showed that long-term cost savings were likely. Even the Mercatus Center, a right-wing think tank, recently found about $2 trillion in net savings over 10 years from a single-payer Medicare for All system. Most importantly, everyone in America would have high-quality health care coverage.

Medicare for All is far less costly than our current system largely because it reduces administrative costs. With one public plan negotiating rates with health care providers, billing becomes quite simple. We do away with three-quarters of the estimated $812 billion the U.S. now spends on health care administration.

Administrative costs are so high because thousands of insurance companies individually negotiate benefit rules and rates with thousands of hospitals and doctors. On top of that, they rely on different billing procedures - and this puts a costly burden on providers.

Even more savings are possible in a Medicare for All system because, like every other wealthy country, we would have a uniform electronic health records system. Such a system generates additional savings because system problems would be easier to detect and correct. A uniform claims data system helps reduce health care spending for fraudulent services. In 2018, total U.S. health care costs were $3.6 trillion, representing 17.7 percent of GDP.

Savings are in part a function of the benefits Medicare for All covers. The Mercatus report and others projected savings, even with the elimination of deductibles and out-of-pocket costs. Under both Sen. Bernie Sanders's (I-Vt.) Medicare for All bill and Rep. Pramila Jayapal's (D-Wash.) Medicare for All bill, patients would not pay deductibles or coinsurance when they receive medical care. Their bills also provide for vision, hearing and dental care, as well as long-term services and supports, such as home care and nursing home care.

Other wealthy countries dictate virtually every element of the health insurance people receive, including what's covered, what's paid, and people's out-of-pocket costs - all identical for everyone. The insurers operate like claims processors or bill payers. They follow the coverage and payment rules set by the government, nothing like the private health insurers in the U.S. which revel in product diversity (read: complexity and confusion).

And, if you're thinking that having the federal government guarantee coverage to all Americans is a big deal, it's actually not. The government already pays for about two-thirds of health care costs. Among other things, it pays for Medicare, Medicaid, VA, TriCare and a wide range of state and local health care programs, along with private insurance for government employees and tax subsidies for private insurance.

Whether you call it single-payer or Medicare for All, it isn't some socialist pipe dream. It's a sensible, efficient, and effective way to guarantee excellent health insurance to everyone.

Diane Archer is a senior adviser at Social Security Works.