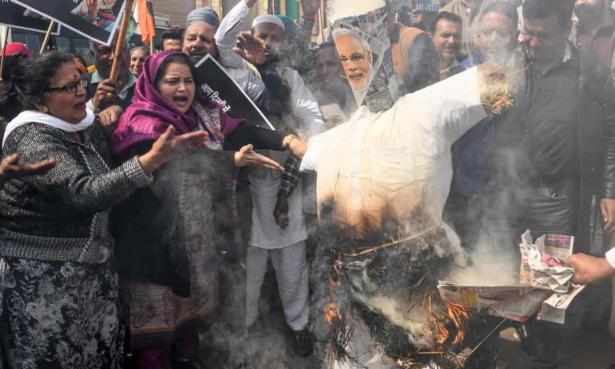 Congress party supporters in Amritsar burn an effigy of Narendra Modi during a demonstration to protest against the violence occurring in Delhi.,Photograph: Narinder Nanu/AFP via Getty Images

Since Sunday violent mobs in north-east Delhi have killed 21 people including a police constable, injured hundreds of others, burned motor vehicles, set fire to shops and homes, assaulted journalists, vandalised places of worship and destroyed a shrine.

The time-honoured convention for reporting on communal violence in India is to not name names. In news reports it is always “violent members of one religious community” attacking violent members of another. This anonymising ritual has the distorting effect of turning unequal violence into a symmetrical tug of war.

It is important, then, to specify that the places of worship vandalised were two mosques and a sufi shrine, that the majority of identified dead people were Muslims, that the thugs frisking reporters, confiscating their phones and beating them up were in every instance Hindu supremacist goons, and that the shops and homes burned nearly always belonged to Muslims.

There were occasions when Muslims burned cars, there is video evidence of a man identified as Muslim who fired a gun, and several instances of stone-throwing by Muslims. But the organising impresarios of this devastation were local politicians affiliated to the Bharatiya Janata party (BJP), India’s ruling party.

They made the incendiary speeches that triggered the violence. Their vigilante auxiliaries attacked Muslims with impunity, and the Delhi police, which reports to the home minister (and Prime Minister Narendra Modi’s right-hand man), Amit Shah, either looked on as goons rioted, arrived after Muslims had been attacked, or actually participated in the violence against people demonstrating against Modi’s discriminatory citizenship law.

Delhi has not seen this kind of violence for decades – but it has been worse: in 1984 the Indian National Congress party used the assassination of Indira Gandhi by her Sikh bodyguard as an excuse for organising a pogrom in which thousands of Sikhs were murdered. The violence in Delhi is not yet a pogrom but a pattern of police complicity, and the political patronage extended to vigilante mobs suggests a continuing public-private partnership designed to violently subdue opposition to the BJP’s Hindu supremacist project.

The cutting edge of this majoritarian project is a radical two-pronged assault on Indian citizenship. First, the Citizenship Amendment Act (CAA), which is designed to fast-track non-Muslim migrants from carefully chosen Muslim majority countries into citizenship, has created, by implication, a religious test for citizenship.

This new law is to be followed by the compilation of a national register of citizens (NRC) that will compel Indians to document their Indianness. Non-Muslims who fail to satisfy the NRC’s tribunals might be able to use the loophole created by the amended citizenship law to find a path to citizenship. Muslims who fail the test will have no recourse: they will be cast into the kind of limbo that the Rohingya experienced in Rakhine before they were violently purged from that province.

This statutory, institutional subversion of Muslim citizenship would be a great prize for a majoritarian party like the BJP. It would be, if you like, a halfway house between the voter suppression tactics of the Republican party in the US and the Nuremberg laws of Nazi Germany: less covert than the first but less explicitly bigoted than the second.

The CAA/NRC two-step is an existential threat to both Muslim citizenship and India’s now threadbare claim to being a secular, pluralist state. It has provoked an extraordinary pan-Indian campaign of civil disobedience led by Muslims, specifically Muslim women, and university students. After winning a second parliamentary majority in 2019, Modi’s BJP government had seemed unstoppable. The reduction of the state of Jammu and Kashmir into federally governed territories, by stripping it of its constitutionally enshrined autonomy; the supreme court’s judgment ruling that the site of a mosque razed by a Hindu mob in 1992 in Ayodhya could be rebuilt as a Hindu temple, encouraged Modi and Shah to believe that they could spring their citizenship trap without opposition. To be publicly thwarted by a nonviolent movement fronted by Muslims that refuses to use a religious idiom, that invokes India’s constitution and its secular guarantees as holy writ, that wraps itself in the national flag and affirms Bhimrao Ambedkar, the Dalit architect of India’s constitution as its inspiration, has been intensely frustrating for this government.

The violent standoff in Delhi between the supporters of the new citizenship law and its opponents has been misleadingly described as a religious clash for a simple reason. The burden of defending secular citizenship has been shouldered disproportionately by Muslims. At the heart of all the sit-ins are Muslim women, and they are mostly located in Muslim neighbourhoods. These sit-ins have become rallying points for a large, vibrant movement in which non-Muslims participate enthusiastically but there are no mainly non-Muslim sit-ins. The BJP government and India’s pliant television news channels have battened on this to paint the protestors as seditious sectarians determined to thwart Modi’s electoral mandate. There’s nothing this government wants more than to clear these demonstrations. Hence the violence. 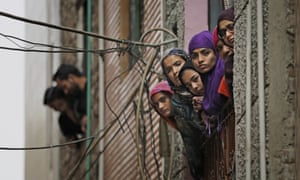 Indian Muslim women look out of a window as security officers patrol a street in Delhi. Photograph: Altaf Qadri/AP

There’s an urgency to this because the resistance to the citizenship law – as symbolised by the sit-ins in the Delhi neighbourhoods of Shaheen Bagh and Jafrabad – has begun to win significant victories. On Tuesday, the government of Bihar, where the BJP rules in coalition with a provincial party, declared that it wouldn’t implement the new National Population Register, a necessary preliminary to compiling the NRC. This might encourage other state governments, especially those ruled by opposition parties, to follow suit.

Without the cooperation of state governments the BJP’s carefully plotted citizenship scheme might come to nothing. This is why the violence in north-east Delhi is both significant and potentially ominous; it might presage something worse, as a thwarted Hindu supremacist government tries to provoke nonviolent protestors, the better to clear them with brute force.