I’m an art teacher. Mike’s policies gutted my school. During those years, I was lucky to have enough copy paper for my students to draw on. Bloomberg’s harmful education policies are today being papered over as his money cascades through the media. 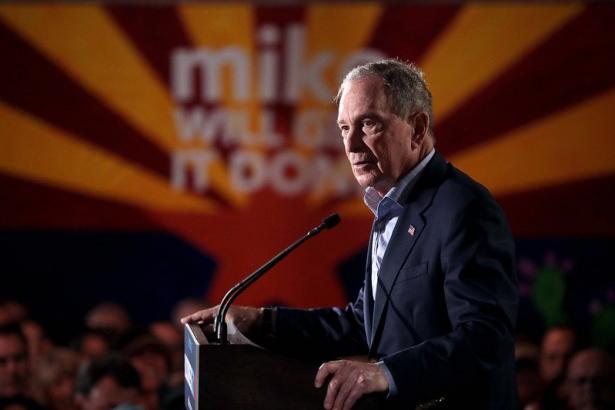 Former Mayor Michael Bloomberg at a campaign event in Phoenix, Arizona., Photo by Gage Skidmore, courtesy of Flickr // The Progressive

Mike Bloomberg, the former mayor of New York City now running for President, often brags about being one of the most prolific charter school creators in the United States. Bloomberg says he “absolutely” intends to expand charters in his federal education plan. This is a serious threat to public education, especially given Bloomberg’s history of using his fortune to shape policy.

Since 2013, Bloomberg has been one of the nation’s biggest donors to candidates and ballot initiatives promoting charters and vouchers, giving more than $4 million to candidates in New Jersey, Colorado, Minnesota, and Louisiana, often through “dark money” PACs. In California, Bloomberg spent a whopping $39 million, backing both Democrats and Republicans who support charters. In Pennsylvania, he gave $6 million to pro-charter incumbent Republican Sen. Pat Toomey, who won re-election with a narrow 1.5 percent edge, and ended up casting a critical vote for Supreme Court nominee Brett Kavanaugh.

New York City teachers are vocal critics of Bloomberg, who not only used public money for school privatization but usurped the power of elected community school boards as the state granted Bloomberg “mayoral control” of New York City schools in 2002.

Bloomberg proceeded to appoint corporate attorney Joel Klein as head of New York City’s education department. Klein began a "test-and-punish" regime, which led to the closure of 150 schools and earned him an 80 percent disapproval rating with teachers

As an art teacher during the Bloomberg years, I saw the nightmare firsthand. When the former mayor cut funding for arts programs by 47 percent, over a quarter of public schools went without a full-time arts teacher; in black and brown neighborhoods like the South Bronx, it was more than half. Elementary schools were hit the hardest, with a staggering 92 percent “out of compliance” with state mandates for art.

At times, this meant teaching in an overcrowded middle school with one box of colored pencils and one box of markers to last a whole year. Forget about erasers, glue, scissors, painting supplies, charcoal, poster board or technology. I was lucky to have enough copy paper for my students to draw on.

Forget about erasers, glue, scissors, painting supplies, charcoal, poster board or technology. I was lucky to have enough copy paper for my students to draw on.

When I was a student in 1980, my New York City middle school had a dedicated art room (with a working sink), a full band program, separate orchestra and chorus programs as well as dance, a full ceramics studio and shop class.

Today, middle schools in the city are lucky to have just one teacher in an arts discipline. We can trace this directly to Bloomberg’s “Small Schools Initiative,” where large schools were broken up into small academies, and the number of administrators tripled as class sizes grew and student services disappeared.

Bloomberg’s claims to have made gains on test scores while reducing racial achievement gaps ended up being disproven. By 2014, New York City was the most racially segregated school system in America. Under “stop and frisk,” Bloomberg’s racist policing policy, many of my students were searched for no reason. It didn’t help that Bloomberg’s pro-developer housing policies accelerated the gentrification of New York City, leading to the displacement of low-income renters of color.

While Bloomberg was particularly bad for the arts, he impacted teachers across all subjects. In 2011, when teachers learned that New York State’s new “accountability” metrics would use student test scores in teacher evaluations, Bloomberg went even farther, threatening that test scores would be published in the newspaper alongside the name of each teacher. With this, the best math teachers in my school transferred out to schools in more affluent neighborhoods.

I first started writing about New York’s absurd accountability policy in 2013, after being told my evaluation as an art teacher would be based on math scores. I was offended by the waste and fraud and by 2016, the state Supreme Court had indeed ruled that the formulas used to calculate teacher ratings were “arbitrary and capricious.”

Rooted in cost-cutting practices from the corporate world, Bloomberg’s harmful education policies are today being papered over as his money cascades through the media. Spending $220 million on advertising in January alone, Bloomberg is even blanketing platforms like Twitter, Instagram, and podcasts.

So if you see effusive, rainbow-pooping endorsements of Bloomberg, it’s likely because of this unprecedented and highly deceptive media blast.

For example, if Bloomberg is so proud of his education record, why did his family try to keep secret his daughter’s marriage to Jeremiah Kittredge, a controversial charter PAC operator?

As Susan Edelman reported in the New York Post, the billionaire heiress rebounded from a recent divorce to marry Kittredge. Neither the divorce nor the new marriage were announced.

Kittredge is the founder and ex-CEO of Families for Excellent Schools, a pro-charter organization that received more than $13 million from the Walton Family Foundation to spend freely on elections in New York and Massachusetts. In 2018, Kittredge was fired from the group following a sexual harassment complaint.

The year before, Kittredge’s political action committee paid a $425,000 fine to the state of Massachusetts for having broken campaign disclosure laws by withholding the names of billionaires who pushed a statewide referendum on charter schools.

In New York, Kittredge had orchestrated massive pro-charter rallies in Albany that were secretly coordinated by Governor Cuomo. It also turned out that Kittredge quietly paid out almost $100,000 in stipends to parent “advocates” who boarded buses and wore T-shirts to fill Cuomo’s rallies with cheering audiences.

With advocates now claiming strong support for charters among parents of color, it’s instructive to look at Kittredge’s history of “racist to the core” attack ads on New York City Mayor Bill de Blasio, which led to calls for retractions and apologies.

One could also revisit Mr. Kittredge’s eel-like dodge of a simple question when he was asked about how charter schools cherry-picked the most involved, motivated parents in urban communities to rig test scores.

Kittredge even attacked my school. On August 3, 2016, the New York Post published an op-ed by Kittredge in which he compared high scores in New York City charter schools to the lowest scores in city schools, calling out my school by name. What he neglected to mention was that my school was an alternative “transfer school” whose mission was to enroll the lowest-scoring students from the South Bronx.

Kittredge’s new spouse, Emma Bloomberg, is a graduate of the elite Spence School, and she has helped elect pro-charter school board candidates. Alongside other oligarchs, Emma Bloomberg served as a board chair for the Stand For Children lobbying group, whose PAC supported pro-charter candidates in far-flung districts like Indianapolis and Alexandria.

Today, Emma Bloomberg sits on the board of Leadership for Educational Equity (LEE), a lobbying nonprofit with an associated PAC that offers free campaign support to former members of the teacher recruitment program Teach For America.

LEE is funded by a panoply of ultra-billionaires, including Intel founder Arthur Rock, the anti-union Walton family and the Sacklers, a family now-infamous as opioid profiteers. LEE funding is open to any and all Teach for America alums running for office, regardless of their education positions—the caveat is that candidates who openly support charters schools have gotten more than double the amount of LEE donations, directly from its oligarch patrons.

Like Donald Trump’s own daughter, Ivanka, Emma Bloomberg would doubtlessly be a strong influence in a Bloomberg administration, with Kittredge akin to a pro-charter Jared Kushner, offering policy tips on his “area of expertise.”

Emma Bloomberg would doubtlessly be a strong influence in a Bloomberg administration, with Kittredge akin to a pro-charter Jared Kushner, offering policy tips on his “area of expertise.”

But Emma’s long career as a political PAC donor actually makes her more similar to Betsy DeVos. With her limitless wealth and his astroturfing prowess, this powerhouse couple could have a profound effect on local school districts across the U.S., as billionaire charter PACs fund less-conspicuous expansions into previously untapped suburban and rural areas.

I wish the newlyweds all the happiness in the world—except in their quest to privatize public schools, cherrypick kids, and dump gobs of PAC money into local politics and deceptive media campaigns.