The new director of the Working Families Party in New York wants to unite the left against Governor Andrew Cuomo and his austerity politics. 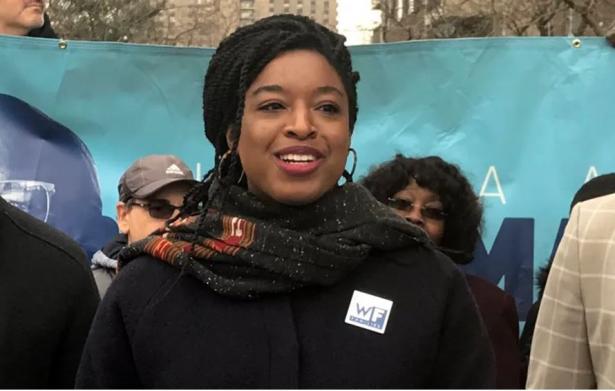 When Sochie Nnaemeka met me at Commons Café in Downtown Brooklyn, she was apologetic. She was barely five minutes late, but our noon meeting was clearly one of many she’d lined up for the day. “I almost went to this completely other place, Brooklyn Commons. It’s nowhere near here,” she said, smoothing out her blue dress. It would have messed up her busy schedule. The barista, intrigued by our request for “somewhere quiet”—someone had started playing piano, loudly, in the back room—led us to a sunny conference room one floor up. “You can talk about your important things here,” he said.

In December, Nnaemeka became the director of the Working Families Party (WFP) in New York, making her the new face of a group with a crucial role in the state’s progressive movement, backing policy reforms and left-wing candidates. Now, she’s tasked with maintaining that momentum—but she doesn’t seem fazed. She’s spent her career building up to this opportunity.

It started at Yale, where Nnaemeka was radicalized. She arrived as a starry-eyed freshman in 2007, but was immediately disillusioned. “It wasn’t the space to engage with real questions of how to make the country a more expansive, inclusive, secure place for immigrants and people of color,” Nnaemeka, who is the daughter of Nigerian immigrants, told me over cold-brewed coffee on an unseasonably warm winter afternoon.

She said she had questions: “What does it mean for the university to be the largest employer in a deeply segregated, divided city?” How could Yale defend “values of the Enlightenment and possibility, when the university basically ran on keeping an almost entirely black workforce at bay?”

So she started organizing with dining hall workers. They were mostly black women, and active members of their labor union. Nnaemeka attended their meetings and joined when they knocked on doors in low-income neighborhoods. “I thought, OK, I may not have a great sense of where my geographic home is, but I feel most at home when I’m with people who are engaged in a solidarity-based struggle,” she said, an excited lilt in her voice. That’s “when the organizing bug” bit her, she added.

Nnaemeka, now 31, has been organizing for a decade. She came to the WFP from the Center for Popular Democracy, where she worked with grassroots groups across the country, including Black Leaders Organizing for Communities in Milwaukee and Detroit Action in Michigan. In that role, she cultivated new political leaders and empowered young women of color. Nnaemeka took the reins of the WFP in New York at a delicate time for the small-but-mighty group. In New York, the WFP helped fuel a progressive wave, working to flip the state Senate to Democratic control and backing cash-bail reform, tighter rent regulations, and driver’s licenses for undocumented immigrants. It was a major force in propelling Tiffany Cabàn’s bid for Queens district attorney. She lost by just 55 votes, but her candidacy pushed the conversation on criminal justice reform to the left. “There’s renewed interest and excitement on the left in electoral politics,” Nnaemeka told me. “People are really searching for a political home and a true left party, and I remain convinced that the WFP is the vehicle for that strategy and that movement.”

Yet the WFP—in New York and nationally—has sometimes struggled to find its place, often straddling the line between the progressive movement and establishment politics. After it endorsed Elizabeth Warren in September, the party faced online harassment, often punctuated by racist and sexist threats. Jacobin declared that the group had “written itself out of history,” framing Bernie Sanders as “the national manifestation” of the WFP’s politics. “The fact that the WFP doesn’t recognize that,” the magazine’s founder, Bhaskar Sunkara, wrote, “reflects how much it has strayed.” When I read those quotes to Nnaemeka—she had surely heard them many times before—she laughed, but didn’t tackle them directly. “We have a theory of change that we need to organize to win the world that we want,” she said, her tone steady and deliberate. “That not does not mean pushing people out at moments of tactical rift, it means having real open and clear conversation, and fighting for people’s votes.”

At different times, the WFP’s endorsements have alienated those to its left and right. The group gave Governor Andrew Cuomo its party line in 2014, sowing internal division and angering progressive groups and candidates. In 2018, it threw its support behind Cynthia Nixon against Cuomo, enraging union members closely aligned with the governor, and its relationship with labor has remained tenuous. In the state Democratic primary that year, the WFP backed Joe Crowley, a long-serving centrist who supported the invasion of Iraq, rather than Alexandria Ocasio-Cortez.

Although Nnaemeka wasn’t around during those endorsements, she’ll need to manage their lingering effects. “We have to make hard choices,” she said. “When it came to Cuomo, there was a political calculation, and at that moment, that was a strategically sound decision.” It’s clear that Nnaemeka often faces questions about the WFP’s past, and she doesn’t want to get bogged down. For her, the hostile response to this year’s endorsement—and the split between the Warren and Sanders camps more broadly—undermines the progressive movement’s long-term objectives. “We have two structural change candidates who are vying for the highest office in the land, talking about eliminating student debt and access to health care, and we’re really fucking excited about that.”

Against that backdrop, Nnaemeka wants to trudge ahead—and to the left. The WFP may have endorsed Cuomo in the past, but in 2020 she is positioning the party in opposition to his policies and style—even if it will further alienate the powerful unions that were once central to its survival. That means strengthening ties with the Democratic Socialists of America and jumping on board with staunch progressives whose politics an earlier iteration of the WFP might have shied away from. “We might not align on everything, but we have to find places of deep alignment,” she said, and “getting rid of the corporate wing of the Democratic Party is one of those places.” The WFP’s mindset “is figuring out where we’re trying to go, and who is in our way. So the corporate wing of the Democratic Party was making it harder for regular people to live good lives in New York.”

Her first fight is Cuomo’s budget. “We’re falling into this right-wing frame of austerity politics. We don’t have what we need, and we’re balancing our budget on the backs of the most vulnerable,” she said, referring to the governor’s proposed $2.5 billion cuts to New York Medicaid. “There’s more than enough for what we need, but we don’t have a leader with the progressive will and creativity to make that possible.” She listed potential sources of revenue that could fill the state’s $6.1 billion budget hole: taxes on luxury real estate and cars or on “second yachts,” she explained, adding, sardonically, “the amount of wealth in our state is, you know, quite large.” Nnaemeka called the state budget a “moral document”; Cuomo’s “fiscal sustainability,” as the governor calls his economic paradigm, has created a “moral crisis” in the state. “People go hungry, schools are underfunded and overcrowded, and what we’re actually focused on is whether mega-millionaires feel comfortable in their day-to-day.”

The WFP’s embrace of a democratic socialist vision enhances its ideological clarity and could solidify its role as the “political home” Nnaemeka said so many on the left are searching for. But it also puts the party on precarious ground. Last summer, the WFP filed a lawsuit against Cuomo, whom they accused of creating a commission specifically to tweak election laws in order to stifle third parties. In November, the commission voted that in order to secure a line on the state ballot, parties must draw either 2 percent of the vote or 130,000 votes—up from 50,000, a relatively low threshold that has allowed parties like the WFP to remain on the ballot, giving New Yorkers the option to “vote their values.”

The new threshold could threaten the WFP’s existence—but Nnaemeka doesn’t seem worried. “We approach this as organizers, and turn lemons into lemonade. For us, the higher threshold is an organizing goal, an opportunity to talk to thousands of new voters.”

Nnaemeka sees Cuomo’s antics as a sign that the WFP is in the right. “The backlash is real, and that’s what happens when people are afraid of a new balance of power,” she said. “For the first time, the left has a real possibility to govern—not just to protest, but to govern, and so people are figuring out how to cut that at the knees.” I asked how her disillusioned 18-year-old self would feel about the current climate. She smiled. “Progressive movements aren’t fringe anymore,” she replied. “This is the moment that I wanted.”

[Karina Piser is a freelance writer.]