The Mexican Muralists Had a Vital Influence on US Art. Can Their Revolutionary Approach Offer Lessons for the Present?

"Vida Americana" at the Whitney tells a tale that should provoke some self-reflection in the present. It is undoubtedly true that Mexican people, the Mexican landscape, and Mexican culture are all inextricably linked to U.S. culture.

February 29, 2020 The Mexican Muralists Had a Vital Influence on US Art Barbara Calderón
printer friendly 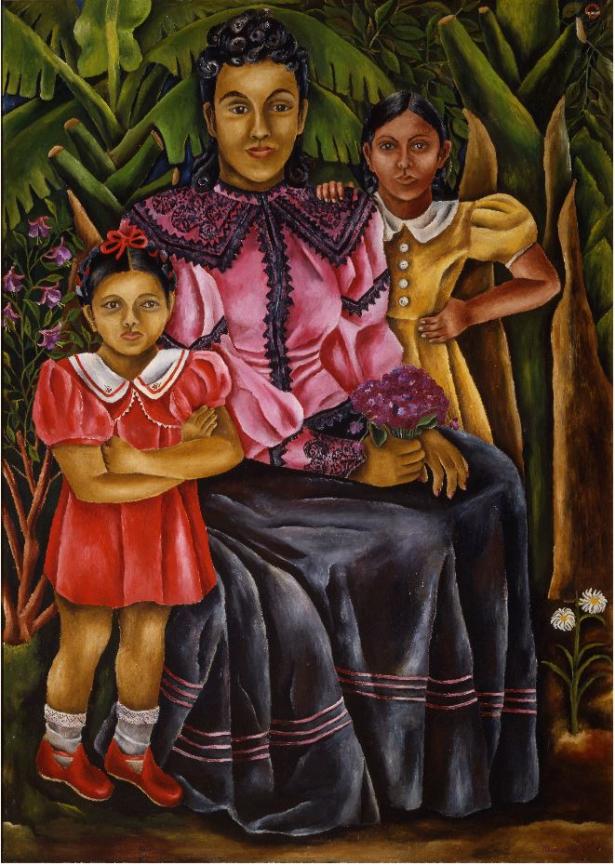 “Mexico is on everyone’s lips,” said American photographer Edward Weston in 1932. “Mexico and her artists.” And nearly a century later, Mexico has maintained her cult status as a source of inspiration for artists and culture seekers internationally. Whether concerning the latest luxury destination, art fair extravaganza, or even a national border and immigration crisis, Mexico remains a hot topic in the American imagination. Last week, the Whitney opened “Vida Americana: Mexican Muralists Remake American Art, 1925-1945,” a show dedicated to outlining the influence of the Mexican Muralists—Diego Rivera, José Clemente Orozco, and David Alfaro Siqueiros—on their American contemporaries.

Curator Barbara Haskell uses Weston’s quote in her catalogue essay to note the swarm of American artists traveling to Mexico in search of alternatives to European modernism in the late ‘20s and ‘30s. And though the significant impact of the Mexican muralists and their mentorship to American artists may not be common knowledge, the documentation exists. In fact, MoMA’s second solo show in its history was given to Diego Rivera in 1931. The first was Henri Matisse.

Yet considering the current heightened political moment and shaky relationship with Mexico, Haskell writes that it “seems more imperative than ever to acknowledge the profound and enduring influence Mexican muralism has had on artmaking in the United States.” As this history comes to wider recognition, we should ask how the concept of “influence” functions to the Whitney and the gatekeepers of the art historical canon? How does the notion of “influence” address the relationship of artists to the social violence, class struggle, and fraught political realities depicted in this exhibition, themes that remain relevant today?

“Vida Americana” makes the case for influence crystal clear. Artworks from both countries depict heart-wrenching and murderous strife, war, and indicting narratives of racial violence. Rivera’s fresco on cement The Uprising (1931) depicts a Mexican mother, infant in hand, defending her family from sword-wielding military police. Injured or dead bodies are strewn among the feet of a crowd of protesters. Later figurative works like American Tragedy (1937) by the US social realist painter Philip Evergood show police violence.  Pieces by Elizabeth Catlett, Hale Woodruff, and Rivera depict versions of lynchings and were aimed at bringing attention to the widespread acts of terror.

Sadly, many works retain their political and social relevance today. Police violence, racial hatred, and labor protest are still recognizable as contemporary national issues. Siqueiros’s Proletarian Mother (1929) evokes the suffering we currently see on the U.S. Mexico border. Considering we live in a country that too often participates in historical amnesia—even allowing for the omission of unpleasant history from public school textbooks—the Whitney, an institution that believes “that the past informs our present and that contemporary art can help us better understand our past and realize our future” may believe they owe us a history lesson.

And it seems that the crux of the show is centered on remembering. Its imperatives are: remember the atrocities of the past, remember the history of your people and your peers, and remember your influences. Several works memorialize the contributions of African Americans to the national labor force, war efforts and industry. Jacob Lawrence’s Migration Series (1940-41) reminds us of the plight of Black migrants as they experience bombings of their homes, disease, and harsh working conditions on their way north at the end of World War I. Eitaro Ishigaki, one of two Japanese-Americans in the show, reminds us with The Bonus March (1932) of the shared disenfranchisement among Black and white war veterans post World War II. The painting depicts a towering African American man holding his fallen white comrade at a march demanding unpaid wages. And Hideo Benjamin Noda, with his painting Scottsboro Boys (1933), reminds us of the nine Black boys wrongly accused of sexually assaulting a white woman on a Southern Railroad train in 1931.

Five American female artists—Elizabeth Catlett, Belle Barranceanu, Thelma Johnson Streat, Marion Greenwood, and Henrietta Shore—each have a small work tucked in the show. Overall, women figure more prominently as subjects—fruit and flower vendors, teachers, comrades in the revolution, and victims of war. Baranceanu’s Building Mission Dam (1938), a mural study of Spanish missionaries overseeing forced labor of Native Americans, was featured in the catalogue but unfortunately doesn’t make it into the exhibition. Its presence would have shown another inextricable linkage between Mexico and the U.S. through the colonization of land and displacement of Native Americans.

Since memory and acknowledgement of influence are such a big theme throughout the exhibition, it’s a shame to see the show missed the chance to acknowledge some of its own forbearers. “In the Spirit of Resistance: African American Modernists and the Mexican Muralist School” was seen first at the Studio Museum in Harlem in 1996 and traveled to five other museums across the country. The show is not referenced. Its living curator Lizzetta LeFalle-Collins confirmed to me she was not consulted by the Whitney even though four of the six African-American artists in “Vida Americana” were featured in her catalogue.

At any rate, “Vida Americana” is just one in a long line of exhibitions making a similar argument. The argument for the Mexican muralists’ influence is recounted in other books, articles, and exhibitions going back decades. The affiliated scholars for shows like “South of the Border: Mexico in the American Imagination” (1993) at Yale University Art Gallery, the book Muralism Without Walls: Rivera, Orozco, and Siqueiros in the United States, 1927-1940 (2009), and “Paint the Revolution: Mexican Modernism, 1910-1950” (2013) at the Philadelphia Museum of Art are all acknowledged as references by the Whitney show.

If abundant art historical revisionism has been done—including academic books and big-ticket exhibitions—where does the idea about the exclusion of Mexican influence come from and why?

It’s partly xenophobia, partly anti-Communist red-baiting, and partly due to art critic Clement Greenberg’s authoritative opinion that heralded abstraction as the one true progressive American art form. Yet “Vida Americana” provides vivid evidence that even Abstract Expressionism has roots in the revolutionary ideologies of the Mexican muralists. Stylistic juxtapositions between Jackson Pollock, Orozco, and Siqueiros make the influence viscerally clear. It is well known that Pollock revered Orozco and was a member of Siquieros’s experimental workshop in New York, where he was encouraged to splatter, drip, and liberate his technique.

But Pollock had what Harold Bloom coined an “anxiety of influence,” masking his sources of inspiration. The proof in the show that Pollock, an innovator in American art history, was inspired by Mexican artists to revolutionize his painting technique will be impactful to many.

Yet using the documentation of influence to validate the inclusion of understudied, undervalued American artists still seems to only continue the marginalization of Latino and Native artists. Were there absolutely no Latino and Native artists of value influenced by the Mexican muralists? None are included in the show. The Ojibwa painter Patrick DesJarlait and Mexican-American artists Eduardo Arcenio Chavez and Octavio Medellín, for instance, were all creating during this period and show stylistic references reminiscent of Mexican Muralism. Of the three, Medellín was considered for “Vida Americana” but ultimately not included. “It would have been a stretch. Every artist in the exhibition has documentation that proves they knew the Mexican muralists or saw their work in textbooks,” assistant curator Marcela Guerrero told me.

Guerrero does address Mexican-Americans in her essay for the catalogue noting their experience with exploitative labor practices, racist hostilities, and even a government-backed deportation effort in the late 1920s and ‘30s. Many were forced to repatriate to Mexico even though they had birthright American citizenship, a shamefully little-known part of American history. Guerrero notes that Rivera first supported repatriation, then rescinded support as he worked on his famed Detroit Industry murals in 1932.

So, what are the wider implications for “Vida Americana”? It is undoubtedly true that Mexican people, the Mexican landscape, and Mexican culture are all inextricably linked to U.S. culture. The cultural siphoning of Mexican culture exists in tourism, fashion, exploitative photography, film, and art internationally and has for decades. It is satisfying to see art historical credit given where credit is due considering the vampiric relationship the U.S. has with Mexico. But the layers of buried histories have only begun to be unearthed.

And though recognition is necessary, I wonder when revisionist exhibitions become cosmetic insertions as opposed to long term investments? Data journalist Mona Chalabi believes the content of permanent collections are better markers of a commitment to equitable and diverse representation for museums.

“Vida Americana” was made possible through more than 65 institutional lenders. The last big demographic study of artists in major museums clocked white artists in the Whitney’s collection at 91.7 percent.

The museum has made efforts to diversify in the last few years collecting important Latinx contemporary artists like Laura Aguilar, Daniel Lind Ramos, and Teresita Fernandez. But it’s important to remain vigilant as both the perception and reality of cultural equity in museums can be skewed. A few years of collecting pointedly is not enough to fill nearly a century of blind spots in American art history. Radical investment is needed. And one hopes that the radical images of racial justice, worker’s rights, and democratic ideals in “Vida Americana” can continue to influence those with the buying power.

[Barbara Calderón is a writer, curator, artist, art librarian, and founding member of the arts collective Colectiva Cósmica. Her work is guided by a background in journalism, Xicana studies, and art history, and aims to augment Latinx art and its historical perseverance. She is currently an art librarian at the School of Visual Arts, and most recently has consulted for The Latinx Project at NYU and the Brooklyn Museum for the Frida: Appearances Can be Deceiving and Radical Women: Latin American At 1960 - 1985 shows.]