The Most Important Senate Seat in 2020 Is Bernie’s

Vermont’s GOP governor could appoint a Republican to replace him and throw everything into disarray. 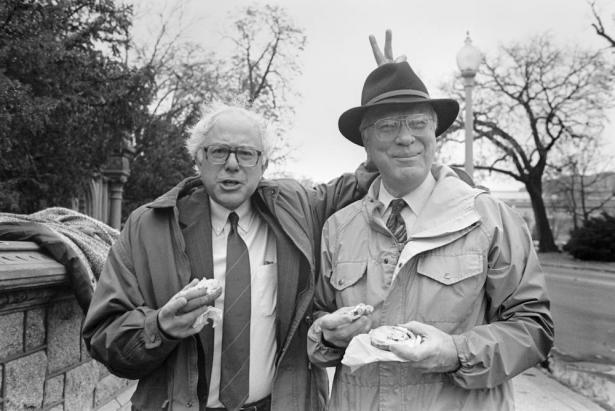 Bernie Sanders, you may have heard, is the front-runner for the Democratic nomination. After a blowout performance in Nevada that saw him take two-thirds of the state’s delegates, and victories in Iowa and New Hampshire, he now holds a sizable delegate lead, with favorable polling in a majority of Super Tuesday states. Even a Joe Biden victory in South Carolina on Saturday is unlikely to change that forecast drastically.

But if Sanders is to secure the nomination over an increasingly hysterical Democratic establishment, that sets up a thorny succession problem for his Senate seat in Vermont. It could even throw a wrench into the early months of a Sanders presidency.

By any estimation, Vermont is a deep-blue state. Both of its senators, Bernie Sanders and Patrick Leahy, caucus with Democrats, as does its solitary House member, Peter Welch. If you include independent progressives who caucus with Democrats in the state legislature, both chambers enjoy Democratic supermajorities with veto override power. That’s important, because there’s one crucial seat in Vermont not under Democratic control: the governorship. That belongs to Republican Phil Scott, who won the seat in 2016.

The Democratic veto override has already come in handy on multiple occasions. Just this week, the Vermont legislature had to override Governor Scott’s veto on a minimum-wage hike that would boost the hourly wage to $12.55 by 2022. Last month, they fell short by one vote needed to overcome another Scott veto, this one on a paid family leave proposal.

What does that have to do with Bernie Sanders? If Sanders ends up as the Democratic nominee, there are three possible outcomes for his Senate seat. If he was confident of winning the nomination and his chances in the general election versus President Trump, he could simply resign the seat. Under existing Vermont law (which is a little vague on the timing of when the resignation must take place), if Sanders resigns at some point between May and early June, that would trigger a special election on Election Day 2020, with his successor entering the Senate before Bernie takes the oath of office. Given the partisan lean, that successor would likely be a Democrat.

If Sanders doesn’t step down, and goes on to win the presidency, his resignation would occur sometime between Election Day and Inauguration Day. The Republican governor, Scott, would then be tasked with making a temporary appointment during the first 100 days of the Sanders administration, before the special election, which must be held within six months of the resignation.

Given Scott’s own party alignment, it’s not inconceivable that he would pick a fellow GOPer as a replacement. That could seed a crucial opponent to Sanders in the Senate, where Democrats can only dream of an extremely narrow majority, if a number of close races go their way in 2020, and Joe Manchin and Kyrsten Sinema keep their intransigence in check.

Another Republican in the chamber, even temporarily, could thwart a President Sanders legislative agenda in its early months. Sanders may not have the ability to install a Cabinet, if Mitch McConnell decides to wage total war. He may not have the ability to use budget reconciliation for any of his priorities if he does not have 50 votes, and if McConnell doesn’t cooperate by bringing a reconciliation bill to the floor.

According to Anthony Gierzynski, chair of the Political Science department at the University of Vermont and director of the Vermont Legislative Research Service, a cross-party appointment by Scott would be very unusual. “The norm in this state has been for the governor to fill a vacancy with someone of the same party,” he told me. “The trick is Sanders is an independent, so I’m not sure how that would play out.” Still, he insisted, “Governor Scott would be likely to honor the norms of the state.”

The Vermont legislature could pass a formal rules change to mandate that any temporary Senate appointment must caucus with the same party as the person who vacated. But the clock is ticking.

It’s true that historically in Vermont, a vacated Senate seat has been filled with a member of the same party. But that situation hasn’t arisen since 1971, when Republican Winston Prouty died on the job and was replaced by Republican Robert Stafford. In fact, a Senate vacancy in Vermont has only happened twice since World War II, both times during far less partisan eras. When that last vacancy occurred, Vermont was a blood-red state under full Republican control. In fact, the state had only one Democratic governor between 1854 and 1971, which means there were far fewer opportunities for displays of interparty comity. And in the 50 years since, the Republican Party has seen a drastic overhaul of its relationship to the maintenance of norms.

Scott is a popular moderate in Vermont. With gubernatorial elections every two years, he may decide to maintain that popularity and assist Sanders by sending a Democrat to Washington. But remember, this decision would be made after his re-election in 2020 (if he wins against Lieutenant Governor David Zuckerman; Scott, who’s won twice statewide, is favored). What happens in late 2020 may have little bearing on a Scott re-election campaign in 2022, should he even decide on running again. It would be entirely up to him whether to help sabotage Sanders in his early months in office.

Fortunately, there’s a third option: The Vermont legislature could pass a formal rules change to mandate that any temporary Senate appointment must caucus with the same party as the person who vacated. But Vermont has a part-time legislature, and would have to do so before its 2020 session ends in May (it’s possible that this rule change, too, would require a veto override). A review of all bills introduced so far during this year’s legislative session shows no such proposal, which means it would also need to be written, debated, passed, and advanced into law within that window. Calls to the offices of Governor Scott and Senate Rules Committee Chair Tim Ashe went unreturned.

The Sanders campaign did not immediately respond to a request for comment.

It’s possible a rules change will not be necessary, and that the governor will uphold the norms of the body. But that’s an extremely high-stakes gamble, given the certain desperation that would no doubt be setting in in the Republican Party if they were to lose the presidency in November. The best ways to ensure that Sanders will have the maximum number of Democrats in his corner at the outset of the presidency rely on either him taking his gamble on winning by resigning early, or the Vermont legislature speeding a rule change through in the next two months. The clock is ticking.

We can't do this without your support!

When you support the Prospect, your dollars go directly to our mission to cover concentrated corporate power, the financial industry, the labor movement, immigration, infrastructure, foreign policy, the disaster of neoliberalism, the climate crisis, and so much more. If it matters in progressive politics, the Prospect is — and will be — on top of it. But only with your help.

Click here to choose your plan today!
THANK YOU!