Intermittent fasting, used for weight loss, means fasting on alternate days, whole days with a specific frequency per week, or during a set time frame. Although effective in animal studies, evidence in human studies is less convincing. 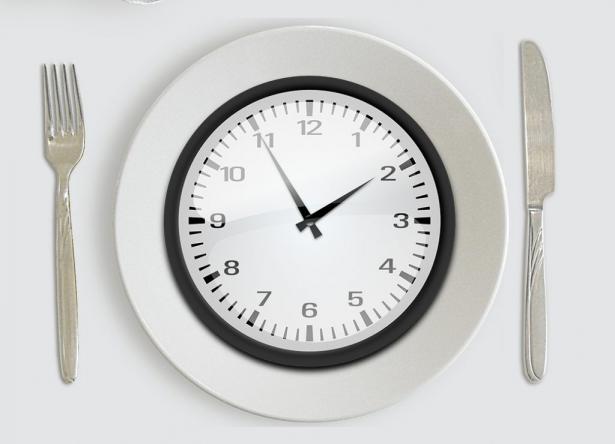 Intermittent fasting is a diet regimen that cycles between brief periods of fasting, with either no food or significant calorie reduction, and periods of unrestricted eating. It is promoted to change body composition through loss of fat mass and weight, and to improve markers of health that are associated with disease such as blood pressure and cholesterol levels. Its roots derive from traditional fasting, a universal ritual used for health or spiritual benefit as described in early texts by Socrates, Plato, and religious groups. [1] Fasting typically entails a steady abstinence of food and beverages, ranging from 12 hours to one month. It may require complete abstinence, or allow a reduced amount of food and beverages.

Prolonged very low calorie diets can cause physiological changes that may cause the body to adapt to the calorie restriction and therefore prevent further weight loss. [2] Intermittent fasting attempts to address this problem by cycling between a low calorie level for a brief time followed by normal eating, which may prevent these adaptations. However, research does not consistently show that intermittent fasting is superior to continuous low calorie diets for weight loss efficiency.

The most common methods are fasting on alternate days, for whole days with a specific frequency per week, or during a set time frame. [3]

The Research So Far

Physiologically, calorie restriction has been shown in animals to increase lifespan and improve tolerance to various metabolic stresses in the body. [4] Although the evidence for caloric restriction in animal studies is strong, there is less convincing evidence in human studies. Proponents of the diet believe that the stress of intermittent fasting causes an immune response that repairs cells and produces positive metabolic changes (reduction in triglycerides, LDL cholesterol, blood pressure, weight, fat mass, blood glucose). [3,5] An understandable concern of this diet is that followers will overeat on non-fasting days to compensate for calories lost during fasting. However, studies have not shown this to be true when compared with other weight loss methods. [5]

A systematic review of 40 studies found that intermittent fasting was effective for weight loss, with a typical loss of 7-11 pounds over 10 weeks. [2] There was much variability in the studies, ranging in size from 4 to 334 subjects, and followed from 2 to 104 weeks. It is important to note that different study designs and methods of intermittent fasting were used, and participant characteristics differed (lean vs. obese).  Half of the studies were controlled trials comparing the fasting group to a comparison group and/or a control group (either continuous calorie restriction or usual lifestyle), with the other half examining an intermittent fasting group alone. A brief summary of their findings:

A randomized controlled trial that followed 100 obese individuals for one year did not find intermittent fasting to be more effective than daily calorie restriction. [6] For the 6-month weight loss phase, subjects were either placed on an alternating day fast (alternating days of one meal of 25% of baseline calories versus 125% of baseline calories divided over three meals) or daily calorie restriction (75% of baseline calories divided over three meals) following the American Heart Association guidelines. After 6 months, calorie levels were increased by 25% in both groups with a goal of weight maintenance. Participant characteristics of the groups were similar; mostly women and generally healthy. The trial examined weight changes, compliance rates, and cardiovascular risk factors. Their findings when comparing the two groups:

This type of dietary pattern would be difficult for someone who eats every few hours (e.g., snacks between meals, grazes). It would also not be appropriate for those with conditions that require food at regular intervals due to metabolic changes caused by their medications, such as with diabetes. Prolonged periods of food deprivation or semi-starvation places one at risk for overeating when food is reintroduced, and may foster unhealthy behaviors such as an increased fixation on food. [7,8]

Individuals with the following conditions should abstain from intermittent fasting:

Although certain benefits of caloric restriction have been demonstrated in animal studies, similar benefits of intermittent fasting in humans have not been observed. It is unclear that intermittent fasting is superior to other weight loss methods in regards to amount of weight loss, biological changes, compliance rates, and decreased appetite. Certain people who typically eat one or two meals a day or do not eat for long stretches of time may show better compliance with this type of regimen.

More high-quality studies including randomized controlled trials with follow-up of greater than one year are needed to show a direct effect and the possible benefits of intermittent fasting. Strong recommendations on intermittent fasting for weight loss cannot be made at this time.