Here's What Could Really Sink the Global Economy: $19 Trillion in Risky Corporate Debt 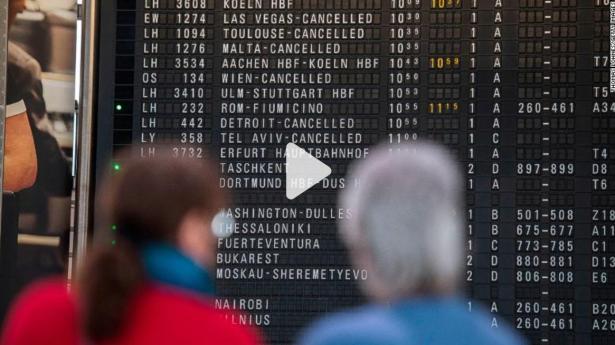 London (CNN Business) Companies have spent the years since the global financial crisis binging on debt. Now, as the coronavirus pandemic threatens to push the world into recession, the bill could come due — exacerbating damage to the economy and feeding a meltdown in financial markets.

As the coronavirus spreads — touching off a plunge in oil prices and a collapse in travel, and shutting factories from Italy to China — there is increasing alarm that companies in the energy, hospitality and auto sectors won't be able to make their bond payments. That could trigger a spree of ratings downgrades and defaults that would further destabilize financial markets and compound the economic shock.

"This certainly is another match being lit [near] the bonfire of corporate debt liabilities," said Simon MacAdam, global economist at Capital Economics. "There's definitely potential for systemic risk."

Investors became increasingly anxious about corporate debt this week as stocks sold off and crude prices nosedived. The ability to buy or sell securities in corporate debt markets has become much more difficult. And the extra returns that investors are demanding to hold corporate debt over more stable government bonds have shot up, signaling that they're now viewed as much riskier holdings.

The anxiety is pegged to companies that rely on stable energy prices and tourism to generate cash. When business gets tougher for these firms, it could prevent them from servicing their debt, leading to defaults. Ratings agencies could also start downgrading many of these companies, forcing some bondholders to sell.

"Default and downgrade risks have increased to their highest levels since the start of the current business cycle," Lotfi Karoui, chief credit strategist at Goldman Sachs, told clients this week.

Much of the risk lies with energy companies, which have ramped up borrowing in recent years to build pipelines and fund other projects. Those companies now face acute pressure due to plummeting oil prices, which have dropped 50% since early January amid evaporating demand for fuel and the implosion of an alliance between major energy producers Saudi Arabia and Russia that had helped prevent oil from flooding onto global markets.

"Oil producers who were depending on the higher prices to pay back their loans so they could drill for oil are under a significant amount of stress," said Andy Lipow, president of Lipow Oil Associates, a consultancy based in Houston.

Investors dumped shares this week in two US energy companies that Morgan Stanley said are at risk of default within the next year: Chesapeake Energy (CHK) and Whiting Petroleum Corporation (WLL). Chesapeake's stock fell to 15 cents on Thursday, while Whiting shares closed at 75 cents.

Airlines, hotels and cruise lines are also in trouble as restrictions on movement grow and more people hunker down at home. A ban on travel from Europe to the United States, announced by the Trump administration on Wednesday, eviscerated airline shares. Budget carrier Norwegian Air, which is heavily indebted, said it would temporarily lay off up to half its workers after its stock dropped 22% on Thursday.

"Coronavirus' rapidly increasing effect on air travel is placing downward pressure on global airline credit profiles, especially as there are risks that demand takes materially longer than previous shocks to recover," Fitch Ratings said Thursday. It is monitoring American Airlines (AAL), which has a significant amount of debt, as well as Alaska Air (ALK), which is based in Seattle, the site of a significant outbreak in the United States. 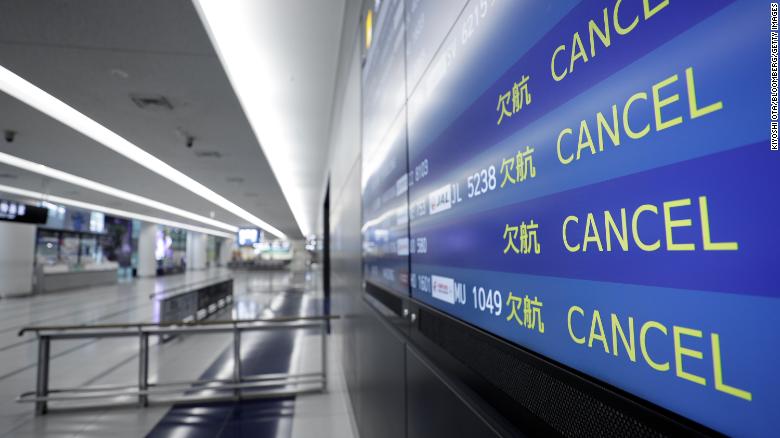 A flight arrival information board displays cancelled flights at an airport in Japan.

Automakers are under the microscope, too, as factories in Italy shut down, with more potential closures looming across Europe and in the United States as the number of infections rises in those areas. The industry was already in its third year of a sales recession because of falling demand for vehicles and the US-China trade war.

Who holds the debt?

With the risk of downgrades and defaults growing, the focus for investors then turns to who holds those liabilities, which could rapidly lose their value.

Banks are less exposed to risky corporate debt than they were to bad mortgages in 2008, according to Capital Economics' MacAdam. But that doesn't mean there isn't potential for a corporate debt crisis to reverberate through the financial system.

One issue is the growing number of corporate bonds that are rated BBB, at the very low end of the spectrum of what is considered "investment grade" debt. If those bonds get downgraded to high-yield or "junk" status, investment funds could be forced to dump them based on their mandates. That could further stress the market and cause liquidity to dry up.

In 2011, corporate bonds rated BBB made up about a third of the market, according to Capital Economics. Today, such bonds account for nearly half of it.

"As the economic cycle matures and investors have picked all the low-hanging fruit — the good, solid investments that give a solid return and aren't too risky — you're naturally going to be looking for riskier and riskier things that years ago you wouldn't have touched with a barge pole," MacAdam said.

Emre Tiftik, director of global policy initiatives at the Institute of International Finance, said it's difficult to determine just how vulnerable these players are.

"We really don't know that much about private equity and hedge fund exposure," he said.

In its most recent financial stability report, the International Monetary Fund raised the alarm about piles of risky corporate debt, which it said could amplify problems and deepen the next recession.

The group conducted a stress test based on a hypothetical economic shock that's half as severe as the 2008 global financial crisis. The results suggested that corporate debt worth $19 trillion from eight countries — China, the United States, Japan, the United Kingdom, France, Spain, Italy and Germany — is at risk of default in a future downturn of that magnitude because companies would struggle to generate enough cash to meet repayments. That would be 40% of all corporate debt.

A wave of defaults, or even a series of rating downgrades and repricing, would shake the financial system.

"The credit market is moving quickly towards the point of no return, where the turn in the credit cycle becomes inevitable and irreversible, as funding sources dry up, issuers face liquidity crunch, credit losses rise, investors rush for the exit, and face extremely thin liquidity on the way out," Oleg Melentyev, head of high-yield credit strategy at Bank of America, told clients Friday.

And while this is a standard end to a credit cycle, Melentyev said, it appears to be playing out at three to four times normal speed.

Should the situation deteriorate further, it will also have economic consequences as companies hurry to reduce their debt burdens, the IMF noted. There could be waves of layoffs, and business investment could fall off. Defaults would also hit banks and could lead to less lending. Companies could find it more difficult to borrow during the period when they need it the most.

This would exacerbate a global recession caused by the coronavirus, which a growing number of economists now warn is a real possibility.

The expectation is that if the world does tip into recession, it would be sharp but short, with the global economy bouncing back as soon as the threat of the virus recedes. But credit risk in the system incorporates a big question mark.

Julia Horowitz is a senior writer. She leads CNN Business international coverage of global markets and business and is based in London.