This is the final volume of the award-winning portrait of the earliest days of the English Reformation and the birth of capitalism, as those events played out in the life of Thomas Cromwell, courtier to king Henry VIII of England. 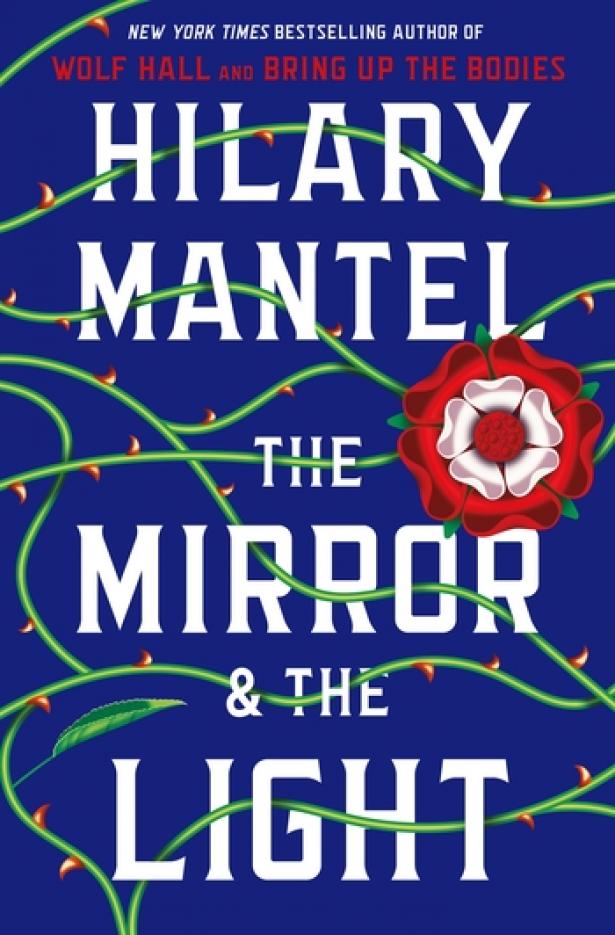 The historical Thomas Cromwell, chief adviser to King Henry VIII, died in 1540. He was executed on the king’s orders for treason and heresy. But for the past 11 years, Cromwell has lived again, inside Hilary Mantel’s lavish and immersive Wolf Hall trilogy and its spinoff properties (a TV show, a play). And last week, the final volume of Mantel’s trilogy, The Mirror and the Light, arrived at last. The book ends as it had to: with Cromwell’s execution.

Saying that Cromwell dies at the end is not really a spoiler, because it happened 480 years ago, and it’s on his Wikipedia page. But when you read Mantel’s books — 2009’s Wolf Hall, 2012’s Bring Up the Bodies, and now The Mirror and the Light — talking about that death feels as though it might be a spoiler, because Mantel’s genius as an author is to make the past feel as though it is happening right now. Her books take place in the present tense, and as you read them, history stops seeming inevitable. Perhaps this time, Henry VIII won’t end up with six wives. Perhaps this time, he won’t decide to kill Cromwell.

Part of what makes the books seem so urgent and immediate is that they take place so firmly within Thomas Cromwell’s head. The bulk of the three books is told in the third person, but every so often, the narration slips easily and elegantly into first or second person, in the way that sometimes in your inner monologue you are yourself, sometimes you narrate your actions as though you are a separate person, and sometimes you address yourself as “you.” And for the narrator of these novels, Cromwell himself is never just “Cromwell.” He is always “he,” and when a clarifier is absolutely necessary, he is “he, Cromwell” — or, when he begins to move up in the world and he’s feeling extremely pleased with himself, he is “he, my Lord Privy Seal.”

And within the confines of Thomas Cromwell’s head, we have no way of knowing for sure that he is doomed. Whatever trouble he falls into, maybe he’ll talk his way out of it. He’s talked his way out of worse.

Cromwell was once considered one of history’s villains. He was King Henry VIII’s chief fixer, and much of that fixing involved, as Mantel puts it in Mirror and the Light, finding ways to “get the king new wives and dispose of the old.” He was instrumental to the downfall of Anne Boleyn, which takes up most of the middle book in the trilogy, Bring Up the Bodies. He helped bring the Reformation to England, and he helped Henry seize England’s monasteries and abbeys for the crown. Under Henry’s orders, he tortured, executed, and ruined men and women alike.

Mantel, however, takes her cue from the historian Geoffrey Elton, who sparked a reevaluation of Cromwell’s legacy in the 1950s. Elton argued that it was Cromwell who worked out what England’s national identity could look like once it had severed itself from the pope, and he who put into place the basis for England’s modern parliamentary government.

Accordingly, Mantel’s Cromwell is a principled reformer, a man who wants to take wealth and power from the corrupt Roman Catholic Church and put it in the hands of the state so that it can better serve the people. He just also wants wealth and power for himself.

Mantel’s Cromwell is in some ways an analogue to Lin-Manuel Miranda’s Hamilton. He’s a self-made man, the son of a blacksmith who fled his abusive father as a teenager to travel through Europe. He worked as a soldier, a merchant, and a spy, and then moved back to England to become a lawyer. He’s a cosmopolitan capitalist, and although he is surrounded by aristocrats and monarchists, he understands that true power, here at the beginning of modernity, lies with the banks.

When we first meet Cromwell at the beginning of Wolf Hall, he works for Cardinal Wolsey, then Henry’s chief fixer himself. He’s a prosperous lawyer, married, with three children, and it’s this version of his life that he still thinks of, in The Mirror and the Light, as “my real life.”

But then: disaster. Cromwell’s wife dies in the sweating sickness that sweeps through London, and his two daughters follow her the following year. Wolsey, meanwhile, is unable to get King Henry the divorce he wants from Katherine of Aragon. Wolsey falls from favor, the king seizes his lands and riches, and he dies of a broken heart.

Cromwell steps in where Wolsey failed. He’s a natural politician, a lawyer who knows when to flatter, when to threaten, and when to start lying, and his enemies underestimate him because he has no noble blood. Cromwell comes up with the legal grounding to get Henry the divorce he wants. He arranges Henry’s marriage to Anne Boleyn, and when Henry begins to tire of her, too, Cromwell introduces him to Jane Seymour and gently stage-manages their affair. Eventually, he finds the legal grounding to annul Henry’s marriage to Anne and have Anne beheaded for treason, so that Henry and Jane can marry.

Cromwell tells himself that all of these actions are for the best, because they keep Henry happy. And as long as Henry is happy, Cromwell can go about his two purposes in life: to advance the cause of the Reformation in England — distancing England from the pope, publishing an English-language Bible — and to amass wealth and power for himself.

But as The Mirror and the Light begins, Anne Boleyn’s blood is still wet on the ground. Cromwell finds himself haunted by her ghost, and by the ghosts of all the other people he’s ruined for Henry’s sake.

Cromwell’s relationship to Henry is at the heart of this trilogy, and it is a relationship steeped in ambiguity. Cromwell builds his life around Henry, around understanding Henry’s needs and desires without Henry ever having to say them: That is what he is good at, and that’s what makes him the second-most-powerful man in England. Henry’s desires start to become Cromwell’s own, so that Cromwell subconsciously covets Henry’s wives and mistresses and Henry’s daughter Mary.

Henry and Cromwell become so close that Cromwell begins to think of them as one. In The Mirror and the Light, “he allows his body to confuse with that of Henry, so that their arms, lying contiguous, lose their form and become cloudy like thaw water.” The two even start to slip together in the narrator’s voice. Halfway through Bring Up the Bodies, the narrator has to clarify, “he, Henry,” rather than “he, Cromwell.” Henry is the only character besides Cromwell who ranks that kind of clarifier.

But Henry is also the man responsible for the death of Wolsey, Cromwell’s beloved mentor. Cromwell destroyed the other men who brought down Wolsey, but he cannot destroy Henry. He, Cromwell, has to love Henry instead, and sin for him, and do both with the full knowledge that Henry will one day destroy him too.

In The Mirror and the Light, Cromwell is at the peak of his power. He’s successfully disposed of his greatest enemies at Henry’s court. He’s married Henry off to Jane Seymour, who gives birth to a boy and gives Henry a legitimate male heir. In gratitude, Henry promotes Cromwell and gives him a peerage.

But Cromwell cannot help resenting Henry, try as he might to quash his treasonous thoughts. He knows that Henry is the kind of person who believes the last person that he spoke to, and as his duties grow more extensive, he’s less able to be by the king’s side at all times to guide Henry’s thoughts in the right direction. Cromwell grows weary of managing Henry’s ego, of always manipulating reality into a form that is most flattering to Henry. He begins to talk to his friends about how much better the realm would be managed if he himself were king. When Jane Seymour — who Cromwell desired for himself — dies shortly after she gives birth, Cromwell thinks, “If Jane had married me, she would be alive now; I would have managed it better.”

Henry sees Cromwell’s rising ambition and resentment, and he grows wary in his turn. Theirs is a relationship of mingled hatred and love, and when Henry at last arrests Cromwell and locks him in the Tower of London, in the suite of rooms Cromwell personally had decorated for Anne Boleyn, it’s as though Cromwell has become Henry’s seventh wife.

Hilary Mantel is the only woman ever to win two Booker Prizes, and she won them both for the first two volumes of this trilogy. In the UK, The Mirror and the Light is considered the biggest publishing event of the year, and in the US, it’s not that far behind. Expectations are high for this novel. And it lives up to them.

The Mirror and the Light is not as taut or as immaculately structured as its predecessors were. It’s a shaggy 754 pages, and it lacks a central goal for Cromwell to devote himself to. All three novels are built around climactic beheadings, and in the first two books, Cromwell is working to enact those beheadings on those he considers his personal enemies: Thomas More in Wolf Hall, and Anne Boleyn in Bring up the Bodies. But in The Mirror and the Light, the beheading looming over everything is Cromwell’s. And he’s not trying to bring it about. He’s trying, with all his might, to stop it from happening. He’s become a reactive figure rather than an active one, and that changes the tension of the book.

But Mantel makes the past feel so immediate that it seems possible Cromwell might actually manage to save himself. There’s a slow, creeping dread to this novel that worms its way in from the beginning and gradually begins to take up more space, so that by the end, I began to feel relieved at the idea of Cromwell’s impending death. At least it would end the dread.

And in the meantime, it’s always a joy to spend time with Cromwell. He’s one of those characters who is so implausibly good at everything that you’d hate him if he weren’t so likable — and if he were not so satisfyingly self-interested. Mantel gives you plenty of space to hate Cromwell, which makes it possible to love him, too. And it makes his gradual evolution from principled lawyer to agent of the despotic state feel all the grander and more Shakespearean.

Throughout, Mantel’s prose is rich and vivid. She’s famous for her archival work, which she uses to ground her novels in the historical truth of the past, and it shows itself here in the vividness of Cromwell’s world. Cromwell’s air is “sharply scented: juniper, cinnamon.” The city of London is the color of “dun and slate, donkey’s back and mouse,” against which shine all the brighter the colors of the imperial state: gold, celestial blue, “imperial purple … silver and flame and halcyon against the wash of the English sky.” The result is immersive: You can lose yourself in these sentences.

As I write this review, the coronavirus spread has officially been declared a pandemic, and those who can are advised to remain home as much as possible. How lucky we are, then, that Hilary Mantel has at last finished her epic, rendering us a gift for this long time alone and indoors. The Wolf Hall trilogy is thousands of pages long. When you can’t leave your house, go get lost in these books instead.