Don't Let Trump Off the Hook for the Coronavirus Crisis

In its rush to praise the president for his response to the pandemic, the press is forgetting how we got into this mess in the first place. It was Trump's choices that put us in the situation we are in now. 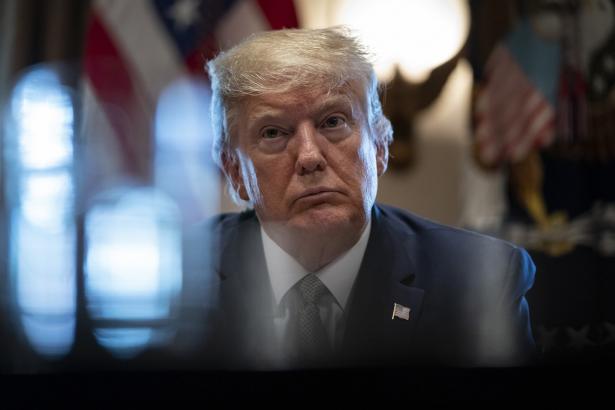 Donald Trump’s first State of the Union in 2017 should have served as a lesson for many in the media. CNN’s Van Jones declared his milquetoast calls for unity the moment he “became president of the United States.” The New York Times’s Glenn Thrush deemed it “the most presidential speech Mr. Trump has ever given—delivered at precisely the moment he needed to project sobriety, seriousness of purpose, and self-discipline.” Here was the long-awaited moment when Trump stepped into his role, leaving behind the poisonous, polarizing figure of the campaign trail. It lasted less than 24 hours.

And yet, more than three years later, some in the media are once again hyping a presidential pivot. On Monday, the president appeared on television and did not call the coronavirus a “hoax,” as he had for weeks. He did not appear to be on a heavy dose of tranquilizers or say anything that tanked the markets. This, some concluded, could only herald the emergence of a New Trump.

Axios’s Mike Allen “could hear new urgency” in the president’s remarks. CNN’s Stephen Collinson went even further, writing a wet kiss of a column. “This version of Donald Trump will save lives,” he wrote, before describing the president in Churchillian terms: His “steely and inclusive temperament was an appropriate match for a day in which the coronavirus crisis darkened by the hour.”

A day later, after another surprisingly somber press conference from Trump in which he nevertheless absurdly claimed that he “felt it was a pandemic long before it was called a pandemic,” CNN’s Dana Bash marveled at what she was seeing. “This was remarkable from the president of the United States,” she said. “This is an important thing to note and to applaud from an American standpoint, and from a human standpoint—he is being the kind of leader that people need, at least in tone, today and yesterday.”

Never mind that Trump spent the hours in between attacking the governors of New York and Michigan for criticizing his own bungled response to the coronavirus. Never mind that he has taken to calling it the “Chinese virus” and labeled The New York Times a “disgrace to journalism” for good measure. A Washington press corps obsessed with the aesthetics of governance is rushing to award gold stars to Trump for clearing the lowest of bars, while threatening to shove the real story—the administration’s failure to adequately prepare for the coronavirus—down the memory hole.

A more accurate assessment of Trump’s performance so far is more likely to be found in opinion pages. Writing for the Times op-ed page, David Leonhardt definitively cataloged the president’s many, many statements downplaying the risk of coronavirus, as well as his administration’s lack of action. “I’ve reviewed all of his public statements and actions on coronavirus over the last two months, and they show a president who put almost no priority on public health,” Leonhardt wrote. “Trump’s priorities were different: Making the virus sound like a minor nuisance. Exaggerating his administration’s response. Blaming foreigners and, anachronistically, the Obama administration. Claiming incorrectly that the situation was improving. Trying to cheer up stock market investors.”

The result has been the unchecked spread of a highly infectious virus across an American population that has been kept in the dark, which has in turn triggered a likely recession. We know from the experience of other countries that widespread testing and robust preparation are essential to flattening the curve of the virus’s spread. The Trump administration, starting at the very top, was caught woefully off-guard, which means anything Trump does now is triage.

The mainstream media’s shift to boosting the new, responsible Trump has coincided with a similar shift in the warped world of conservative media. Previously, allies like Sean Hannity and Laura Ingraham backed Trump’s initial coronavirus narrative, telling their audience of geriatrics that they had nothing to fear from a “hoax.” But in recent days, particularly after a national emergency was declared on Friday, that narrative has changed dramatically. Now the threat is very much a real one, and, contrary to all available evidence, the president is doing a phenomenal job addressing it.

“Tonight, we are witnessing what will be a massive paradigm shift in the future of disease control and prevention,” Hannity said on Friday. “A bold, new precedent is being set, the world will once again benefit greatly from America’s leadership.… The federal government, state governments, private businesses, top hospitals all coming together, under the president’s leadership, to stem the tide of the coronavirus.” On Twitter, radio host Hugh Hewitt claimed that “CDC testing delay was nobody’s fault and certainly not the fault of” Trump. This, despite the fact that the administration had promised that four million tests would be available over a week ago.

Trump rewrites history—or at least tries to—all the time. The emerging media narrative, which focuses on the belated actions Trump is taking now, not only makes Trump’s whitewashing easier but even suggests that Trump has any other motive than the naked self-interest he displayed when he could have actually protected the public’s well-being. At the very least, the shift in conservative news suggests that the debate over the president’s competence will become yet another partisan one, obscuring Trump’s objective, on-the-record negligence in the usual deafening cross fire.

It was Trump’s choices that put us in the situation we are in now: A collapsing economy, thousands sick across the country, and shelter-in-place orders in a growing number of major American cities. The media can’t forget that.

[Alex Shephard is a staff writer at The New Republic. @alex_shephard]