Americans’ Revulsion for Trump Is Underappreciated

As Democrats fret about their own prospects, many fail to recognize the president’s fundamental weakness. 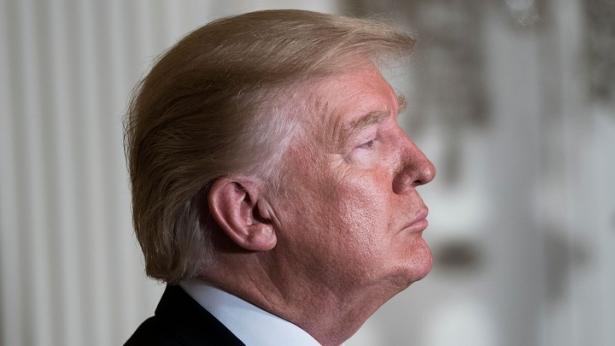 The release on Friday of an ABC News/Ipsos poll indicating that 55 percent of Americans approved of Donald Trump’s handling of the coronavirus—12 points higher than the previous week—prompted another round of fatalistic chatter in certain quarters of the political establishment. Shocked by Trump’s victory in 2016, some left-leaning commentators and rank-and-file Democrats alike have been steeling themselves for his reelection in 2020, noting that most presidents win second terms; that, at least before the pandemic, the economy was humming along; and more recently that, during moments of national disaster, Americans tend to rally around the leader they have.

But these nuggets of conventional political wisdom obscure something fundamental—something that even Democrats have trouble seeing: The United States is in revolt against Donald Trump, and the likely Democratic nominee, former Vice President Joe Biden, already holds a daunting lead over Trump in the battleground states that will decide the 2020 election. By way of disclosure, I am a Democratic pollster; for professional and personal reasons alike, I want Democratic candidates to succeed. But no matter what, I also want candidates and party operatives to base decisions—such as where and how to campaign—on an accurate view of the political landscape. At the moment, Democrats are underestimating their own strength and misperceiving the sources of it.

Every time Americans have gone to the polls since Trump took office, they have pushed back hard against him. The blue wave that began in state elections in 2017 grew bigger in the 2018 midterms and bigger yet in 2019. Trump focused the Republican Party’s whole 2018 congressional campaign on immigrant caravans and the border wall, and he lost. Trump held rallies in support of the Republican gubernatorial candidates on the last nights before elections in the deep-red states of Kentucky and Louisiana, and they lost. The GOP losses right through the end of 2019 were produced by dramatic, growing gains for Democrats in the nation’s suburbs. Democrats took total control of the Virginia legislature, where the party held on to all the suburban seats it had flipped two years earlier and gained six more.

Even so, a CBS News poll taken late last month found that 65 percent of Americans and more than a third of Democrats believed that Trump would win reelection. Trump has been confidently stalking Democrats, holding exuberant rallies in each of the early caucus and primary states.

For a time, each week’s voting made Trump’s position look stronger. Bernie Sanders took a commanding delegate lead after the Nevada caucus, and Democratic leaders and many others in the anti-Trump world panicked. Sanders was widely viewed as Trump’s preferred opponent, and he looked unstoppable in the nomination battle. Republicans were rubbing their hands together, eager to spend millions “educating” the country about Sanders’s long-ago honeymoon in Moscow and his socialist plans to destroy American health care. Even after Joe Biden stunned himself and all the political analysts by winning the South Carolina primary by nearly 30 points, much of the subsequent commentary dwelled on the nearly 30 percent of Sanders voters who were not certain they would vote for the eventual nominee. The New York Times soon published a front-page story on the socialist podcast Chapo Trap House and a broader movement calling itself the “Dirtbag Left,” which embraced Sanders and attacked his Democratic opponents. The alienation of people like these would reelect Trump, supporters of other Democratic candidates feared.

But Democratic voters took over the nominating process and changed everything. No group of voters felt more threatened by Donald Trump than African Americans, and no group was more determined to see him defeated. When a stunning 61 percent of black voters in South Carolina chose Joe Biden, other Democrats got the message. Turnout surged on Super Tuesday, led by Texas with a 45 percent increase over 2016 and Virginia with a 70 percent increase, for the highest turnout in state history. The increase was led by African Americans and voters in the suburbs. Two weeks later in Michigan, Tim Alberta declared in Politico, “Democratic turnout exploded,” led by a 45 percent increase in the state’s richest county.

Trump has nationalized our politics around himself and his job performance, and that has created a nine-point headwind for the Republican Party. While the pessimists obsess over any of Trump’s most favorable polls, particularly in the Electoral College battleground states, Trump has never raised his approval rating above the low 40s in FiveThirtyEight’s average of public polls; 52 to 53 percent disapprove of his performance in office. And that remains true during the current crisis.

Trump has improved his numbers with the evangelical Christians, Tea Party supporters, and observant Catholics who make up the core of his Republican Party, but it is a diminished party. The percentage of people identifying as Republican since Trump took office has dropped from 39 to 36 percent, according to an NBC News/Wall Street Journal poll. Trump has pushed moderates out of the party, and those moderates are changing their voting patterns accordingly. Fully 5 percent of the voters in the South Carolina Democratic primary had previously voted in the state’s Republican primary. In Michigan, Republican strategists tried to make sense of the 56 percent increase in Democratic turnout in Livingston County, a white, college-educated, upper-class community that Trump won by 30 points. Republicans are shedding voters.

Well, everyone should pay less attention to the interviews with Trump voters at his rallies—of course people who attend his events still support him—and more to the fundamental changes in public attitudes that undercut Republican prospects. The signature policies that are cheered at every Trump rally are unpopular with most Americans.

Trump’s reelection campaign is premised on voters embracing an “America first” vision on trade and immigration, a defense of the traditional family with a male breadwinner, and a battle for the forgotten working class. But the percentage of Americans who believe that free trade between the United States and other countries is mostly a good thing has jumped from 43 to 56 percent in three years—reaching 67 percent among Democrats. The percentage who believe that foreign trade is an opportunity for economic growth rather than a “threat to the economy” has jumped from about 60 to 80 percent since Trump took office. His tariffs and trade war have united much of the country against him.

As he demanded that Congress fund a border wall with Mexico, pushed migrants into new camps inside and outside the U.S., and dramatically reduced legal immigration, Americans suddenly embraced immigrants and America’s immigrant history. The percentage offering a warm response to the phrase immigrants to the U.S. grew from 52 percent in January 2019 to 59 percent in July and spiked in September to 67 percent.

Women started the revolt against Trump’s America the day after his inauguration, and their opposition continues to deepen. In 2018, Democrats increased their margins relative to 2016 by more than double digits with white college-educated women—Hillary Clinton’s base—but also with white unmarried women and white working-class women. In 2018, black women turned out to vote in record numbers and gave Republicans only 7 percent of their votes.

The women’s wave grew to a potential tsunami when I began testing the leading Democratic candidates against Trump in the 2020 presidential contest earlier this month. With Joe Biden as the candidate, Trump won only 4 percent of African American women. He lost Hispanic women by 25 points, white unmarried women by 18, white college women by 14, and white Millennial women by 12—all at historic highs for Democrats.

Yet while the revulsion that women and suburbanites show toward Trump registers with elite commentators and Democratic operatives, the role that working-class voters have played in Republicans’ recent electoral troubles mostly does not.

The white working class forms 46 percent of registered voters; most are women. Although these voters’ excitement and hopes made Trump’s 2016 victory possible, they were demonstrably disillusioned just a year into Trump’s presidency. They pulled back when the Republicans proposed big cuts in domestic spending, Medicare, and Medicaid and made health insurance more uncertain and expensive, while slashing taxes for corporations and their lobbyists. In the midterms, Democrats ran on cutting prescription-drug costs, building infrastructure, and limiting the role of big money, and a portion of the white working class joined the revolt. The 13-point shift against Trump was three times stronger than the shift in the suburbs that got everyone’s attention.

Trump won white working-class women by 27 points in 2016. But at the end of 2019, Biden was running dead even with Trump nationally. Eight months before the election, Democracy Corps—of which I am a co-founder—and the Center for Voter Information conducted a survey in the battleground states that gave Trump his Electoral College victory. (Trump won them by 1.3 points in 2016.) Our recent findings showed Biden trailing Trump with white working-class women by just eight points in a head-to-head contest. These numbers herald an earthquake, but they have not penetrated elite commentators’ calculations about whether Trump will win in 2020.

When President Barack Obama urged voters to “build on the progress” by supporting Hillary Clinton in 2016, he underestimated how much working-class voters felt Democrats had pushed their concerns out of sight. Democratic presidents championed NAFTA and presided over the outsourcing of jobs; bank bailouts, lost homes and wages, and mandatory health insurance further alienated working people; and Clinton did not hide her closeness with Wall Street or her discomfort campaigning to win working-class and rural communities. So working people had lots of reasons to consider voting for Donald Trump, who said he was battling for the “forgotten Americans,” but shocked Clinton supporters could see only the race cards he played to great effect the second he got off the escalator at Trump Tower. Now the failure of political elites to see the role working people played in the Democratic victories of 2018 makes them believe that Trump is headed for reelection.

Earlier this year, I assembled an online sample of 250 Democratic base and swing voters to watch the president’s State of the Union address. They reacted second by second to his words and claims and, afterward, drew conclusions about the president. They turned their thumbs down when Trump hailed the “great American comeback.” He lost white working-class men and women on the comeback of jobs and income and “the state of the union is stronger than ever.” After listening to the president for more than an hour, 63 percent said he’s “governing for billionaires and big money elites.” The elites may not see working people, but working people see Donald Trump.

Perhaps sensing the danger to the incumbent, Republican leaders in Congress appear willing to approve a massive stimulus plan in response to the coronavirus—a stimulus significantly larger than the one they ravaged Obama for pushing through. That could raise Trump’s prospects—but the potentially catastrophic human consequences of COVID-19 could also work against him. Trump, one can safely assume, will do almost anything to get reelected, and my fellow Democrats will do all they can to defeat him. But they also need to take into account this basic fact: Large portions of the electorate, knowing what the stakes are, have been rebelling against Trump for three years and are eager to finish off his vision of America.

Stanley B. Greenberg is a pollster who worked for Bill Clinton, Al Gore, Tony Blair, and Nelson Mandela. He is the author of R.I.P. G.O.P.: How the New America is Dooming the Republicans.