When the Invisible Hand Gives You the Finger 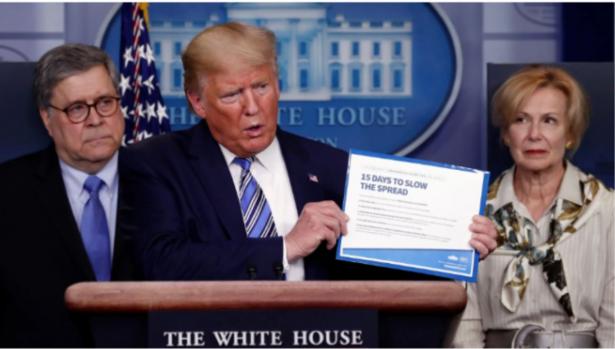 Since the days of Adam Smith, capitalists have been arguing that unfettered markets are the best way to organize the economy. Smith famously said that the rich are “led by an invisible hand” to, “without knowing it, advance the interest of the society.” The rise of the welfare state in the wake of the Great Depression tempered such magical thinking for a few decades, but the ascent of neoliberalism in the last half century has brought a resurgence in market fundamentalism, in both theory (very much including the pages of the New York Times and Washington Post) as well as practice.

Yet none of the steady stream of articles from these outlets attesting to heartbreaking shortages of medical equipment in coronavirus-ravaged areas in the US—“A NY Nurse Dies. Angry Co-Workers Blame a Lack of Protective Gear” (New York Times, 3/26/20), “Unprotected and Unprepared: Home Health Aides Who Care for Sick, Elderly Brace for Covid-19” (Washington Post, 3/24/20), “NY May Need 18,000 Ventilators Very Soon. It Is Far Short of That” (New York Times, 3/17/20), or “The Hardest Questions Doctors May Face: Who Will Be Saved? Who Won’t? “ (New York Times, 3/21/20), for instance—have stopped to ask why the laws of supply and demand have so catastrophically failed in this crisis.

I could feign surprise at this elision, but truthfully, it does not surprise me in the least. It angers me, yes; but surprises, no.

Americans can rightly demand an explanation for the vast gulf between the ideas espoused by free-market advocates and the failure of the market to provide essential social goods, most pressingly right now, healthcare. But instead, shortages of masks, ventilators and hospital beds are presented ahistorically, as though there is no cause; problems to be solved, but problems somehow without origins. A good bit of coverage addresses some of the political failures responsible for the shortages (that coverage has its own problems, though it is beyond the scope of my mental health to be able to address them here), but economic failures go completely without analysis, even when they are, on rare occasions, explicitly mentioned.

A Washington Post piece (3/28/20) noted that personal protective equipment (PPE) for health care workers cannot be bought from private vendors “because companies manufacturing masks and other emergency gear are demanding cash payments on delivery.” The same piece quotes Virginia Gov. Ralph Northam: “Allowing the free market to determine availability and pricing is not the way we should be dealing with this national crisis at this time.” But if you’re looking for criticism of the market-driven inability to provide life-saving equipment to front-line workers, you won’t find any in this article. Nor is there any analysis; Northam’s quote is close as it gets.

Similarly, the New York Times (3/29/20) ran a piece titled “The US Tried to Build a New Fleet of Ventilators. The Mission Failed”:

The stalled efforts to create a new class of cheap, easy-to-use ventilators highlight the perils of outsourcing projects with critical public-health implications to private companies; their focus on maximizing profits is not always consistent with the government’s goal of preparing for a future crisis…. Covidien executives told officials at the biomedical research agency that they wanted to get out of the contract, according to three former federal officials. The executives complained that it was not sufficiently profitable for the company.

This is a blow-by-blow account of the failed ventilator project, but it is as shallow in analysis as it is rich in detail. The subhead reads, “The collapse of the project helps explain America’s acute shortage,” but, really, all it does is describe it. The lines above are the only ones that even come close to analysis in the 1,800-word story. Also, “maximizing profits is not always consistent with the government’s goal of preparing for a future crisis” is a hell of a way to say capitalism is incompatible with public health.

As superficial and cursory as these two mentions of market failures are, they are the exception; hundreds of articles about the pandemic run every day without even this much. Even coverage of Trump’s use of the Defense Production Act—a Korean War–era law that gives the federal government significant additional power to compel private production and services—managed to sidestep mention of the fundamental truth underscored by the DPA’s very existence: that sometimes a visible hand is needed to “advance the interest of society.”

‘Moral trade-off’ of lives vs. profits

Given the blasé response to the market’s inability to deliver life-saving equipment to those who need it, because it’s not “sufficiently profitable,” it is perhaps not surprising that the view that profits are more important than lives has been treated as a reasonable opinion by corporate media.

As if on cue, in mid-March political and economic elites started talking about the need to “get the economy going again,” making sure “the cure isn’t worse than the problem,” and public-health restrictions having “gone too far.” Texas Lt. Gov. Dan Patrick suggested senior citizens should be willing to get ill and die so we “don’t sacrifice the country.” Twitter responded with scathing dark humor and a trending hashtag, #NotDying4WallStreet.

Jesus died for our sins, grandma died for the Dow.

We’ve been saying that the Republican Party is a death cult, or that capitalism itself is a death cult, for so many years, but I never thought we’d get this close to them actually getting on TV and telling us it’s our patriotic duty to die for their money.

But corporate media treated the idea as legitimate. The Washington Post’s story (3/24/20) on Patrick’s comment went so far as to frame it as a “he said, she said,” Republicans vs. Democrats issue:

Patrick (R) faced a sharp backlash Tuesday for suggesting that older Americans should sacrifice their lives for the sake of the economy during the coronavirus pandemic, with Democrats arguing that public health should remain the country’s top priority. 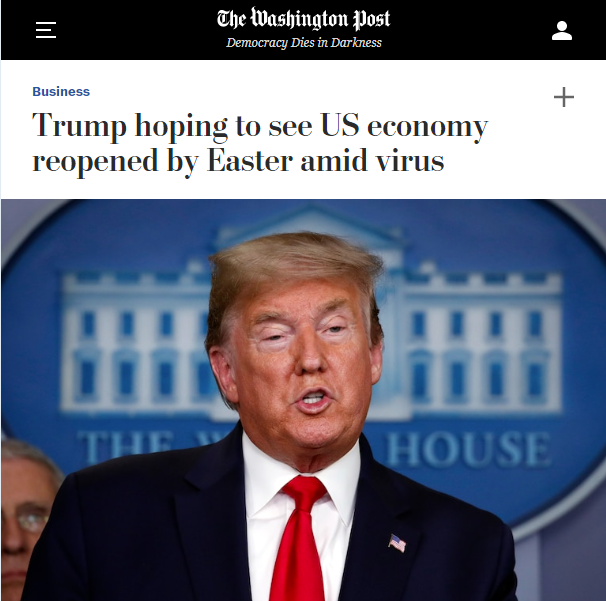 The Washington Post (3/24/20) refers to Trump’s urging a step that “health experts have made clear” would cause “many more deaths” as “optimism.”

The Post (3/24/20) covered Trump’s “raring to go by Easter” pronouncement in a similar manner: “Trump’s optimism contradicted the warnings of some public health officials who called for stricter — not looser — restrictions on public interactions.” “Some” public health officials here means all public health officials, and what the Washington Post calls Trump’s “optimism” would more accurately be described as his utter disinterest in anything or anyone that does not profit him personally. Further down the article acknowledged:

Health experts have made clear that unless Americans continue to dramatically limit social interaction—staying home from work and isolating themselves—the number of infections will overwhelm the healthcare system, as it has in parts of Italy, leading to many more deaths.

President Trump, Wall Street executives and many conservative economists began questioning whether the government had gone too far and should instead lift restrictions that are already inflicting deep pain on workers and businesses.

So on the one hand we have those concerned that “many more deaths” will occur if we loosen social distancing practices, and on the other hand we have the investor class that thinks public health has “gone too far.” That these two perspectives are both presented as reasonable opinions is yet another example of the false equivalencies that so often plague the Times and the Post. But the equanimity with which these corporate outlets discuss the trade-offs of lives and profits is truly appalling. 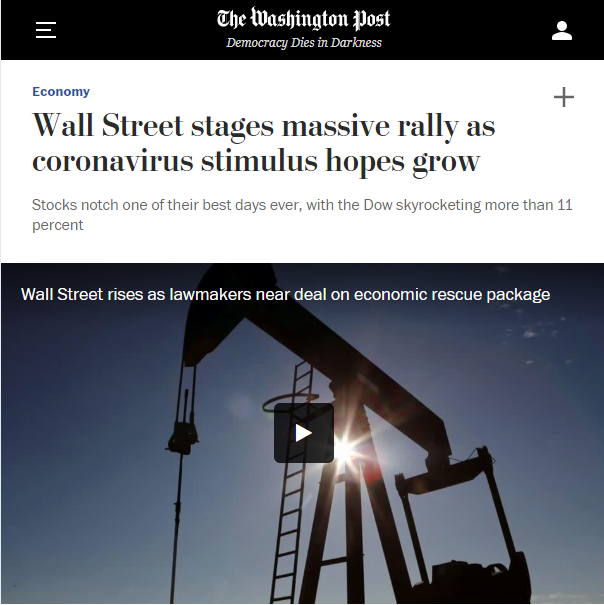 For the Washington Post (3/24/20), this is good news: “Global markets held their highs even as entire countries announced lockdowns and deaths tolls continued to grow.”

The false equivalence between profits and lives is aided in part by an additional layer of obfuscation: Corporate media are presenting 1% concerns about the stock market as a general interest in “the economy.”

As always in a capitalist economy, gains are privatized while losses are socialized. What this means is that when a company does well, shareholders and executives divide the spoils; workers rarely benefit (and almost never without a union that collectivizes their fight and strength). When, on the other hand, business is bad, it is workers whose hours, benefits or wages are cut, or who lose their jobs entirely. When stocks rise, the investor class benefits; when they fall, everyone suffers.

The economic impacts of the coronavirus are massive and devastating: Brick-and-mortar businesses cannot sell goods and services, and millions of workers have been thrown out of work. Income loss means people go hungry, aren’t able to afford medical care, lose their homes. It also further depresses sales across the entire economy, not just in brick-and-mortar points of sale.

The obvious solution is to keep workers on payroll, and for the government to subsidize businesses that have lost revenue as a result of public-health restrictions in order to meet their payrolls. But this solution has never even been on the table in Washington. Instead, the policy discussion has been dominated by calls to “re-open the economy,” i.e., ease social-distancing restrictions in order to increase commerce, and calls for corporate bailouts. But neither the kill-grandma approach nor the slush-fund approach does anything for the 99%.

Against this background, a piece like the New York Times’s “Restarting the Economy Is About Lives Versus Livelihoods” (3/24/20) highlights corporate media complicity in promoting Wall Street’s agenda. “It’s a moral trade-off between saving lives and sustaining economic livelihoods,” it says, without even mentioning aid to those who have lost their jobs. The actual trade-off is between saving lives and boosting corporate profits and stock prices, and it’s anything but moral.

Coverage of the $2.2 trillion stimulus bill likewise conflated the stock market and the economy, describing the bill as “a lifeline to Americans and their employers” (Washington Post, 3/24/20). The final bill, signed by Trump on Friday, March 27, provides for a $600 increase in monthly unemployment benefits for four months; a one-time means-tested payment of $1,200 per adult (and $500 per child); some state aid that very partially addresses the massive cost increases states are facing; and $500 billion in corporate aid that has no meaningful strings attached to it.

The stock market reacted positively to the bailout bill. As for the rest of us, it’s talk to the invisible hand.

Dorothee Benz is a writer, organizer, and strategist who has spent decades on the frontlines of social justice struggles in the United States. Follow her on Twitter @DrBenz3.