'Bacurau' was filmed before Jair Bolsonaro won the corrupted election for presidency of Brazil, yet in its timelessness seems to say more now about Brazil and global North-South relations than even before. 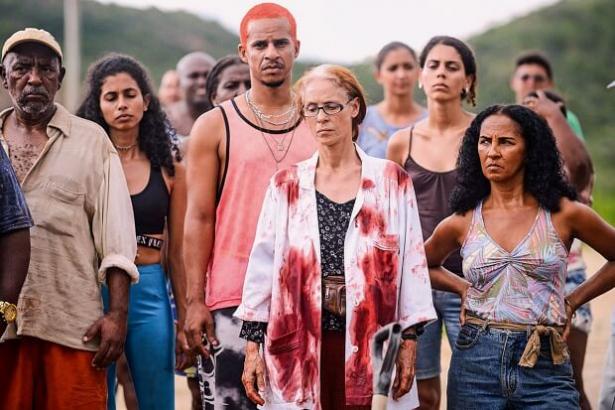 Bacurau was filmed before Jair Bolsonaro won the corrupted election for presidency of Brazil, yet in its timelessness seems to say more now about Brazil and global North-South relations than even before. It’s hard to imagine Brazilian government support coming in for such a film were it to be proposed today, but as one indication of its power, it won the Grand Jury Prize at the Cannes Film Festival in 2019.

Like the American West, this part of Brazil functions, in terms of national identity, as the locus of primordial myth-making. In its racial and ethnic composition it is about as perfect a fusion as you might see anywhere in Brazil of the three major confluences—the Indigenous, the African and the European. Like the American Western film genre, the sertão describes a kind of inescapable geographical determinism that almost, but not completely, subverts other forms of human intervention in nature such as industrial development and class relationships.

Brazil provides an excellent case study in the history of transition between rural- and city-dominated economies. Eventually, as in most countries, the rural sector (agriculture, cattle, mining) comes to be dominated by urban financial interests. In the colonial and post-colonial world, these interests in turn are controlled by Wall Street, London’s The City, and La Bourse in France. These factors of global inequality, which can be headlined as “Rapacious North continues to exploit vulnerable South,” all come into play in racially mixed Bacurau. The only switch here is that the powerful financial center of Brazil is, of course, the whiter, more European São Paulo, which on the map is in the South of Brazil.

The story of Bacurau takes place “a few years from now.” The small village in the sertão mourns the loss, at 94, of its revered matriarch, Carmelita, whose descendants come in from afar for the funeral. Days later, its inhabitants notice that their village has mysteriously vanished from most internet maps, internet connection becomes spotty, access roads are closed off, the water supply is attacked, and a UFO-shaped drone starts flying overhead. There are unseen forces that want to sow confusion and despair among the population, as a slimy politician, Tony Junior, appeals for their vote and delivers months-old consumables, questionable drugs, and a dumptruck full of used books for the school library.

Bacurau’s local strongman Lunga has removed his gang to a compound outside of town, but two factors bring them back: They’re running out of supplies, and now, with the town under attack, they’re needed to coordinate the resistance.

This is not a particularly religious town. There is a church, but lately it has been used as a storeroom. And even though but a microdot on the map—and not even that now—Bacurau keeps its little historical museum open to the rare visitor who might pass through. The museum has photos of the ranches that contributed to the local economy, a display of old weapons, and the expected kinds of material objects associated with cattle-raising and related industries. A newspaper is also on view featuring a story titled, “Rebellion Quashed in Bacurau.” So there is a history here—of classes, struggle, resistance.

Most Brazilians would be familiar with some of that history. A classic Brazilian study by Euclides da Cunha (1866-1909), a Brazilian journalist, sociologist and engineer, was his 1902 magnum opus Os Sertões (the plural of sertão), a non-fictional account of the Brazilian military expeditions against the rebellious Northeast village of Canudos, known as the War of Canudos. (The English translation of that book is called Rebellion in the Backlands.)

Pushing farther back in history, there is a town in the State of Pernambuco, where the fictional town of Bacurau is set, called Palmares. The quilombo dos Palmares was a fugitive community of escaped slaves and others in colonial Brazil. It lasted for generations, from 1605 until its ultimate suppression in 1694. Although the quilombo was located in the former captaincy of Pernambuco, the fugitive site is located in a place called União dos Palmares in what is today the neighboring Brazilian state of Alagoas.

This is the historical framing of this story, which non-Brazilians might not quite appreciate. Thus the calling back of Lunga and his followers for help in the bloody confrontation with the crazed, amoral outsiders, fits comfortably within the national ethos. The fact that in the film the residents all seem to enjoy the effects of a little white pill from time to time, likely with some hallucinatory power, may also refer back to Indigenous sources of psycho-ecstatic experience.

The particular ways in which the townspeople mete out their own brand of folk justice, both to the politician Tony Junior and to the mercenary Michael, also reflect the unique populist culture and values of the sertão. In subtly recalling all this background to the story, the filmmakers make Bacurau both an intensely regional, if not national epic, as well as a tale of universal interest.

Now, what was this mercenary crew doing in Bacurau anyway? Why did they select this remote village, and who facilitated their establishment of a home base there? These questions are unaddressed, but I could not help thinking they were serving as a kind of advance force designed to clear the population out of a region where possibly a precious ore or rare earth had been discovered (see lithium: Bolivia). Perhaps in a larger, far less mystical sense, they represented those government, global financial and industrial interests seemingly hell-bent on destroying Brazil’s Amazonia to raise more cattle for the North’s insatiable appetite for hamburgers and palm oil. And sadly, that is no sci-fi movie: It’s happening now, as we speak, brought to you by our own fascist-friendly forces in the White House that helped engineer the fall of the Lula and Dilma labor governments in Brazil and the emergence of a backward-looking politician like the right-wing Bolsonaro.

Aside from Udo Kier, Bacurau features the still marvelous Sônia Braga as Domingas, the town doctor with a bit of a drinking problem, Bárbara Colen as her granddaughter Teresa, Thomas Aquino as the singer Pacote, and a dedicated cast that also includes the jazz singer Luciana Souza.

Bacurau opened in Los Angeles on March 13. At 131 minutes, it’s in English and Portuguese with English subtitles. The trailer can be viewed here.

ALL THEATRICAL SCREENINGS OF BACURAU HAVE BEEN CANCELLED BECAUSE OF COVID-19.  HOWEVER, BACURAU CAN BE VIEWED ON THE FILM AT LINCOLN CENTER WEBSITE.

Eric A. Gordon is the author of two composer biographies: Marc Blitzstein and Earl Robinson. He writes frequently on cultural and political subjects. He is former Chair of the SoCal Chapter of the National Writers Union (Local 1981, UAW).