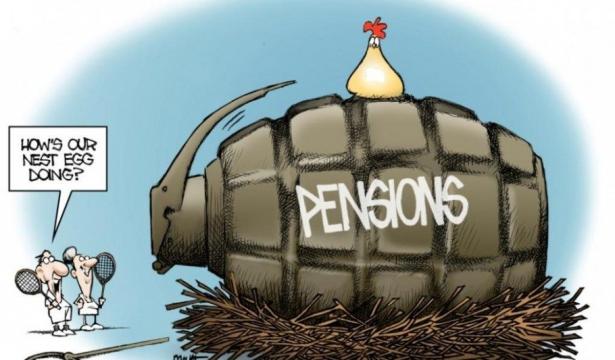 It is not a secret that the United States has an inadequate and underfunded pension retirement system.  Its about to get much worse!  The private and public sectors’ pension plans are suffering terrible losses as a result of layoffs and investment losses. We are weeks away from a new assault on what’s left of millions of pensions across the country.

There are two kinds of pension plans: (1) a defined benefit plan is when workers retire and get a set amount of money each month (such as 80 percent of their highest wage). This was the gold standard many unions won for their members in the post-WWII years. It required employers to set aside enough money to ensure workers would have adequate income when they retired. (2) Starting in the 1980s employers began to reject defined benefit plans as too expensive and moved to defined contribution plans – so-called “modern pensions.” In these, the employer and employee make a set contribution to a pension savings each month (often a 401K). Employers preferred these because employees are responsible for their own funds, and they bear all the risk. If the investments don’t yield adequate returns, the employee will have a lower pension income.

Right now, things are looking bad for workers with both kinds of pensions.

Defined benefit pensions were particularly common in the public sector. But many states were already looking at budget shortfalls before the pandemic due to the Trump tax cuts, and those are now going to be much worse. The revenue shortfall that will result in budget deficits will hit state and local governments as early as this summer.

Workers in the private sector who have union negotiated pension plans have been fighting for years just to hang on to what they have earned. Truck drivers, industrial workers, musicians and others are already experiencing dramatic cuts to their pension income.  This is a result of the loss of participating employers and government policy.  Under various laws, like ERISA, union pension plans are monitored by the government.  In some cases, company failure and US trade policy put some of the union funds at risk. Rather than enacting policies to protect the funds, government overseers cut benefits and weakened the plans. The true legacy of the Neoliberal Era.  So far the Congress, the courts and several Presidents refuse to see these pension plans as our deferred wages.

Those workers who have defined contribution plans have watched years of their deferred wages saved in 401k type plans wiped out in a matter of weeks.  These plans place all the burden of risk on the worker and in many cases, under the best of circumstances, provide an inadequate income at the end of a working life.  Gig workers in all industries, from tech workers, graphic artist, lawyers and bookkeepers and  many other occupations, are in these 401k plans if they have anything at all. In those sectors employers don’t put in a penny toward a workers’ pension.

Of course, there are the millions of workers without any pension plan at all. Bhairavi Desai, the leader of the New York Taxi Workers Alliance says all the time, “For low wage workers the pension plan is death.”  In this terrible moment we have a chance to change all this and correct yet another gross injustice of 21st century capitalism.

I believe that we can make the fight to change this situation now.  First organized labor needs to immediately demand that any further “bailout bills” include all pension plans that are suffering loss or are inadequately funded.  We should demand that Speaker Pelosi and Senator Schumer take a stand.  Even Republicans  Like Senator Portman from Ohio, the Teamsters favorite Senator, needs to show some guts and put forward a plan to save the pension plan.

Any further aid to state and localities should include monies to restore losses to public sector pension funds.

Support for the banking system should include money to replace the losses suffered in worker’s 401k. If we can bailout Boeing, we should certainly make these workers whole. All those elected officials who sold their stocks based on insider information need to start making amends right now by doing the same for the 401k plans.

Finally, we need to demand the Social Security system provide a minimum benefit to all workers of $3,000 a month at age 60.  Bernie Sanders and Alexandria Ocasio-Cortez need to lead the progressive charge in Congress.

Ed Ott has 50 years of experience in the labor movement. He formerly served as Executive Director of the New York City Central Labor Council, which represents 1.3 million trade unionists and is former Distinguished Lecturer in Labor Studies with the Joseph S. Murphy Institute for Worker Education & Labor Studies. Ott began his career as a union organizer, served as a local union officer, and later as the political director for several large labor organizations. He is the co-author with Ruth Milkman of New Labor in New York: Precarious Workers and the Future of the Labor Movement (Cornell University Press, 2014).