The United Electrical workers’ union and the Democratic Socialists of America are teaming up to help nonunion workers organize during the coronavirus crisis. The goal: find workers who are already spoiling for a fight and help them win it.

April 20, 2020 Interview with Mark Meinster by Meagan Day Jacobin
Printer friendly
“It’s Time to Engage in as Much Class Struggle as We Can” Published April 20, 2020 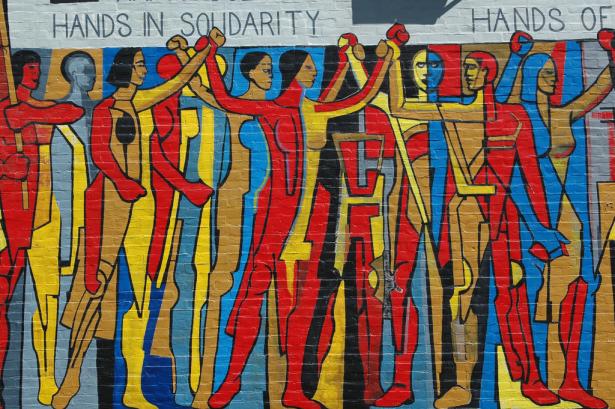 A scene from the mural on the side of the United Electrical Workers' Western Region headquarters in Chicago, Illinois.,Terence Faircloth / Flickr

Now the Bernie campaign is over, and the coronavirus pandemic has plunged the nation into economic crisis. Naturally, workers have sustained the greatest damage. In this moment, UE is calling on labor unions to fight harder for their own members and for the broader working class. The union itself has created online resources for nonunion workers, and has published a special issue of UE Steward dedicated to pandemic-related organizing.

UE has also joined with the Democratic Socialists of America to form the Emergency Workplace Organizing Committee, a project that connects nonunion workers facing pandemic-related workplace issues to trained volunteers who can provide logistical support, assisting them in organizing their coworkers and fighting back.

Jacobin’s Meagan Day spoke to Mark Meinster, an International Representative for UE, about the implications of the pandemic and economic crisis for the labor movement, and what it means to have socialists and labor unions working together to support new organizing.

Who does UE represent and what does it stand for?

UE represents 35,000 employees nationally in a variety of sectors, from our traditional base in electrical manufacturing, to graduate school employees, to federal contractors, to rail transport workers.

The union’s history is rooted in aggressive struggle to improve workers’ conditions, rank-and-file control, political independence, and an internationalist approach to building the labor movement.

We endorsed Bernie Sanders very early this cycle. It happened at our convention and he received a rousing endorsement from our rank and file. He’s beloved in our union.

How is the pandemic-related economic shutdown impacting working people?

Clearly this is life or death for workers, and workers across the economy and in many sectors are standing up and fighting back. We at UE feel like now is not the time to shy away from that. It’s not the time to fawn over “good employers.” We believe strongly that the labor movement needs to be providing support, providing tools, helping to lead fights by workers who are making immediate demands related to the coronavirus crisis.

We have reoriented our organizing work toward focusing on getting support to workers who are looking to organize. We’ve started doing a ton of outreach to workers through different channels, and we’ve found that this is a moment when workers are really looking to fight back.

People are rising up in their workplace place in various ways. It doesn’t mean that the obstacles to organizing that have existed for a long time aren’t there, but we’re definitely seeing workers willing to take risks in order to protect their own lives. And even though essential workers who are still working may feel sort of powerless in this situation, when they look at their place in the economy right now they’re seeing that they have more power than they’ve had in a long time. Given the enhanced unemployment benefits, employers need workers more than workers need employers right now.

It’s time to pick some fights and to develop worker leadership, and hopefully we can come out of this with a stronger labor movement.

Why can’t we just rely on lawmakers to force companies to take care of workers during the crisis? Isn’t that their job?

Workers have never been able to depend on lawmakers to win complete justice in the workplace. And to the extent we’ve ever won real meaningful reform, it’s been because workers have been in motion — and in many cases willing to engage in disruptive action — to win what they need. It’s a mistake to depend on solely on legislators, although we also need legislators to do their jobs.

The package that did pass, while it had some important provisions in it, left a lot of people out. The first package doesn’t impact employers with over 500 employees in the United States, and that’s a huge segment of workers. And even those who work for companies that employ under 500 people are having a hard time accessing those benefits. So workers need to put as much pressure on Congress as we possibly can to provide the reforms that we need. And workers need to put pressure directly on employers. For example, our members, through their own democratic process, have called on their employers to in some cases to shut down, in other cases to drastically modify their operations, in other cases to provide hazard pay.

Your members of course have the benefit of being unionized, but what about workers who aren’t unionized?

Unions need to be reaching out to workers in unorganized workplaces with support in the form of training around their right to concerted activity, training around OSHA rights to refuse unsafe work, and training in how to organize and mobilize their coworkers.

We need to be helping workers who don’t have a union think through what actions they can take in their workplace, and strategize about how to win immediate demands for personal protective equipment (PPE), for social distancing in the workplace, for hazard pay, or to get their workplace shut down with pay if that’s what they’re aiming for.

The task is to putting workers in motion where they want to be in motion. Now is not the time for complacency from union. It’s not the time for unions to sit back or hunker down. It’s time to engage in as much class struggle as we can.

UE has joined forces with the Democratic Socialists of America (DSA) to run the Emergency Workplace Organizing Committee with this kind of outreach in mind. How was this project conceived and what is it doing?

When UE was reorienting our work to take into account the impact of the pandemic, we started doing our own outreach and got flooded with calls from workers looking for help in this moment. When we saw that DSA was doing really similar outreach, and had put out a Google form for people to fill out if they wanted help organizing around coronavirus-related issues, it seemed to overlap perfectly with our thinking about what needed to happen right now. So we got in touch with folks at DSA and started talking it through, and it just seemed like a natural fit to partner up and use the resources that both organizations can offer to advance this common project.

We’re doing broad outreach to workers and then giving them tools they need to succeed in their own workplace efforts. The hope is that those combined efforts will contribute to some broader change, whether it’s at large corporate chains or whether it’s at the policy level.

And the way that it works is that somebody sees the project floating around on social media or wherever, and if they are at a workplace that’s not unionized and they’re facing problems related to the pandemic or the economic shutdown, they can reach out and they will be put in contact with people who know a thing or two about how to actually organize. Right?

Right. So, if you respond to the form, you’ll quickly get a phone call or a text message from a volunteer on the project who’s been trained in responding to these intakes. And then the case will be assessed, and then we’ll strategize a way to help.

We’re focused on finding those cases where workers are already fired up to come together to improve things in their workplace. There are some DSA members on the project who are very skilled in workplace organizing, as well as many who are just eager to help in all kinds of ways. And UE brings a broad range of experiences, from running strikes to building worker centers to organizing temp workers. So there’s a really diverse array of organizing experiences, and there’s a system in place to handle large volumes of calls, hundreds so far.

You don’t often see socialist organizations and unions collaborating this closely on projects of this magnitude. Does it bode well for future of the working-class movement?

I think it’s absolutely necessary for the future of the working class.

In recent years there’s been an organizing concept developed called distributed organizing. You see it increasingly in the political space, and the Sanders campaign has taken it to a whole new level. Essentially what it amounts to is engaging large groups of committed volunteers to take on tasks that ordinarily staff people would take on, which allows you to scale work up to a much higher level. And if there’s one movement that needs to figure out how to do that, it’s the labor movement. There’s no way you can rebuild the labor movement in this country solely on the basis of paid staff doing the organizing.

And historically it’s the Left that takes that task on. It’s the Left where you have this reservoir of committed activists who understand on a political level the value of working-class organization. People are going to have to start getting involved in workplace organizing through left organizations.

Our union was founded by people who had a critique of capitalism, and who were fundamentally opposed to the idea that the interests of the boss and the interests of the workers are the same. Our whole outlook flows from that belief that there is clear, sharp class struggle happening in the world, and that this economic system is not working for workers.

But this has often set UE apart. Talking critically about capitalism in the labor movement wasn’t that possible before ten years ago or so. Now we’re seeing changes happen politically, and we’re seeing new openings for unions and left organizations to work together. And we’re seeing, hopefully, the resurgence of the Left and labor working together to try to rebuild working-class power.

Obviously we’re all a bit stung right now by Bernie’s loss, but it strikes me that DSA is capable of providing all of this volunteer power in large part because it has exploded in size due to the two Bernie presidential campaigns of the last five years.

We didn’t win the presidency, but if all we’ve gained is tens of thousands of people who are now members of organizations that can be relied upon by the labor movement for this distributed organizing, that’s nothing to sneeze at.

Absolutely. And the change we need doesn’t happen in one or two election cycles. We’re talking about making like huge changes in the belly of the beast of the capitalist system. And if we can’t acknowledge and build on the gains that we’ve won then we’re really doing a disservice to our own efforts over the last few years, and in the years to come.

Mark Meinster is an International Representative for UE.