As Republican governors across the South gear up to reopen businesses in their states over the objections of public health experts, health care workers for the Department of Veterans Affairs (VA)fear for their vulnerable patients, and for themselves. 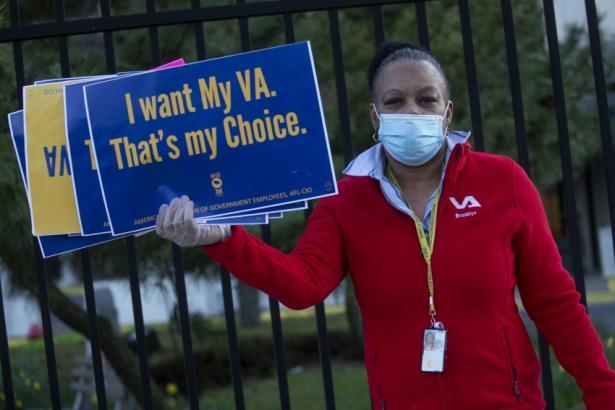 As Republican governors across the South gear up to reopen businesses in their states over the objections of public health experts, health care workers for the Department of Veterans Affairs (VA)—already stretched thin in the face of the COVID-19 crisis—fear for their vulnerable patients, and for themselves.

The governors of Florida, Georgia, Alabama, Mississippi and Tennessee say they are coordinating plans for regional reopening of businesses that have been shuttered for weeks by the spread of coronavirus. The most aggressive plans thus far have come from Georgia governor Brian Kemp, who announced this week that his state will allow gyms, barber shops, tattoo parlors and other businesses to reopen this Friday, along with restaurants and movie theaters on Monday. That announcement has drawn objections from the mayors of Georgia’s biggest cities, as well as from public health experts, who point out that the state’s infection rate has not yet peaked, and that Georgia lacks the capacity to do widespread testing in a way that would make such reopening safe.

One obvious consequence of reopening businesses before the virus is contained could be an increase in COVID-19 cases, wiping out any benefits from the past weeks of social distancing. Such a scenario is concerning for John Corn, an AFGE union steward and a nurse at a VA medical facility in Carrollton, Georgia that provides care for elderly and disabled veterans. Between staffers who are sick, forced to take time off to care for children whose schools are closed, and forced to quarantine because they came in contact with a colleague who tested positive for COVID-19, Corn says that his facility is already seriously short-staffed—sometimes there are only two medical workers, rather than the usual four, overseeing a house with 11 patients. “It’s very stressful times for the staff and the residents,” Corn says. “Twelve hours of work, stopping for just 20 minutes to throw down some food and take a drink. That’s the only break we’re getting.”

Corn and his coworkers are members of the American Federation of Government Employees, which represents hundreds of thousands of VA employees nationwide. Since the coronavirus outbreak began in earnest, nurses at his facility have been trying to get access to more personal protective equipment (PPE), particularly N95 masks, which are being tightly rationed. For now, Corn and others who have direct patient contact are given only gloves and a basic surgical masks.

“We’re rationed one mask per day. You wear that one mask for twelve hours,” Corn says. At the end of his shift, he takes off the mask, goes home, and then puts the same mask on to walk back into work the next day and receive a new mask. The shortage of protective equipment puts everyone at risk. Because the facility has been locked down to visitors, Corn points out, the only way that patients can become infected is through staff members, who leave, go home and come back in every day. If the state’s business reopening causes a “massive increase” in cases as he fears, staffers can transmit that to vulnerable patients. Even though nurses are conscious of the fact that they could easily become asymptomatic carriers of coronavirus, they have not been able to secure more PPE. Instead, he says, they’re simply told that “this is what it is.”

The same problems plague VA workers in Florida—another state where a Trump-allied Republican governor, Ron DeSantis, is determined to reopen businesses. Desantis appointed a special commission to come up with a plan for reopening by the end of the week. Tatishka Thomas, the president of AFGE Local 548 in Bay Pines, Florida, which represents more than a thousand VA medical workers, says that one of her top concerns is that workers who do not have direct patient contact are issued only a single surgical mask per week, well short of what she considers to be safe.

Thomas dreads the idea of businesses in the state opening in the near future. “I’m extremely concerned, Because of the simple fact that everyone hasn’t been tested,” she said. Currently, Floridians without symptoms are not being widely tested, despite the fact that there could be many asymptomatic carriers. Asked what her union’s relationship is with the governor’s office, Thomas had a one-word answer: “Nonexistent.”

The VA employees in Repulican-controlled southern states find themselves in the politically tricky position of being both union members (unpopular), and essential front-line health care workers taking care of veterans (very popular). John Corn, who is himself at increased risk from COVID-19 because he is a diabetic, understands firsthand the bitter irony of the situation: His employer, the U.S. government, will not give him and his fellow coworkers what they need to protect themselves at work, even though their primary goal is to protect the veterans in their care. The same politicians who are quick to proclaim their love for veterans—and their disdain for public sector unions like AFGE—are putting those veterans in danger by reopening businesses too soon, and exposing their caregivers to greater risks.

"I choose to do what I do because I love what I do. I love my veterans. I support my country by taking care of these veterans,” Corn says. “But i'm also a union member. I support my union. And I will be there for my members to give them that voice."