Fifty Years Ago This Spring: Millions of Students Struck To End a War in Vietnam 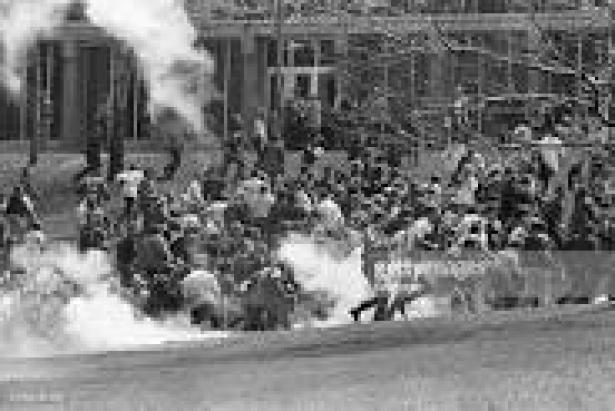 President Richard M. Nixon prided himself on the accuracy of his political prognostication. Nixon was never more prescient than fifty years ago this month, in a remark made to his secretary, just before delivering a White House address that announced a U.S. military invasion of Cambodia. “It’s possible,” Nixon told her, “that the campuses are really going to blow up after this speech.”

Blow up they did, as Nixon’s unexpected escalation of an already unpopular war in Vietnam triggered a chain of events culminating in the largest student strike in  U.S. history.

In May, 1970, an estimated 4 million young people joined protests that shutdown classes at 700 colleges, universities, and high schools around the country. Dozens were forced to remain closed for the rest of the spring semester.

During this unprecedented campus uprising, about 2,000 students were arrested. After thirty buildings used by the Reserve Officer Training Corps (ROTC) were bombed or set on fire, heavily armed National Guardsmen were deployed on 21 campuses in 16 states.

Five decades later, all U.S. colleges have been shut-down for a different reason-- a “peacetime” crisis of global scale and impact. (Ironically, it has triggered the same campus debate about how interrupted Spring semester course work should be graded!—see https://www.nytimes.com/2020/03/28/us/coronavirus-college-pass-fail.html)

Unfortunately, students responding to the fall-out from COVID 19 are forced to share feelings of anger, fear, and outrage mainly on line, as individuals physically isolated for the time being. In contrast, what was most educational about campus shutdowns fifty years ago was experiencing the power of collective action on such a mass scale.

Almost overnight, and in highly spontaneous fashion, there was an explosion of activity by many hundreds of thousands of students not previously engaged in anti-war activity—and that created major political tremors.

Among the achievements of the May, 1970 strike was helping to curtail  military intervention in southeast Asia.  As Neil Sheehan notes in A Bright Shining Lie, his prize-winning Vietnam War history, “the bonfire of protest” ignited by  Nixon’s “incursion” into Cambodia was so great that the White House “had no choice but to accelerate the withdrawal” of U.S. troops from the region. Unfortunately, the halting pace of American disengagement continued for another five years, amid much further bloodshed among Vietnamese (who suffered an estimated 3 million civilian and military deaths overall).

Some campus radicals started objecting to U.S. policy in Vietnam during the first term of Nixon’s predecessor, Lyndon Johnson. Johnson campaigned in 1964 as the “peace candidate” in a presidential race against Senator Barry Goldwater, a rabidly right-wing Republican. But, over the next two years, President Johnson began a massive military build-up to prevent his ally, the Republic of Vietnam, from being toppled in the southern part of the country by a communist-led nationalist insurgency.

Criticism of Johnson found its earliest and most polite expressions in “teach-ins”—on-campus debates and tutorials about Vietnam. But lots of talk soon turned to action. Hundreds and eventually thousands of local protests were organized—against military conscription and on-campus officer training, Pentagon funded university research, and visiting corporate recruiters from arms-makers like Dow Chemical.

An insurgent offensive in February, 1968 and mounting U.S. casualties (which eventually totaled 60,000) shattered any hope that Johnson had for military victory. Even after the president declined to run for re-election, anti-war protestors still descended on Washington, DC. in numbers increasing from the 50,000 people who marched on the Pentagon in 1967 to the 300,000 who gathered near the White House two years later.

Nixon replaced Johnson in January of 1969, after Democratic candidate Hubert Humphrey, Johnson’s vice-president and loyal supporter of the war, was defeated in a three-day race. Nixon claimed to have a “secret plan” to bring peace to Vietnam and withdraw the 500,000 U.S. troops still deployed there.

His plan was “Vietnamization”—turning more of the fighting over to troops loyal to the U.S.-backed government in Saigon, while ordering massive bombing of targets throughout Vietnam, Laos, and Cambodia and sending ground troops into Cambodia on April 30, 1970.

Students at elite private institutions long associated with anti-war agitation were among the first to react. Protest strikes were quickly declared at Columbia, Princeton, Brandeis, and Yale (where many students had already voted to boycott class on Friday, May 1 so they could join a mass rally supporting members of the Black Panther Party then on trial in New Haven).

Meanwhile, in the heartland, a Friday night riot outside student bars in downtown Kent, Ohio, was followed by the burning of a Kent State ROTC building over the weekend. Ohio Governor James Rhodes ordered 1,000 National Guard troops to occupy the campus and prevent rallies of any kind.

The Guard came geared up with bayonets, tear gas grenades, shotguns, and M-1s, a military rifle with long range and high velocity. Chasing a hostile but unarmed crowd of students across campus on Monday, May 4, one unit of weekend warriors suddenly wheeled and fired.

As historians Gerald Sullivan and Nancy Zaroulis described the scene in Who Spoke Up?:

“It was a moment when the nation had been driven to use the weapons of war upon its youth, a moment when all the violence, hatred, and generational conflict of the previous decade was compressed into 13 seconds when the frightened, exhausted National Guardsmen, acting perhaps in panic or simple frustration, had turned on their taunters and taken their revenge.”

In the aftermath of this fusillade, Guard officials orchestrated a cover-up exposed in The Killings in Kent State: How Murder Went Unpunished, by investigative reporter I.F. Stone. Even the FBI later found that the mass shooting was “unnecessary.”

The martyrdom of Jeffrey Miller, Allison Krause, Sandy Scheuer, and Bill Schroeder had a powerful emotional impact on hundreds of thousands of other students. This time, the casualties of war weren’t draftees from poor communities in the U.S. or peasants in Vietnam—all of whom had been dying in much larger numbers for years. Nor were they African-Americans, like the three student protestors fatally shot at Orangeburg State in South Carolina two years earlier or the two murdered by state troopers at Jackson State later that May.

The students in the kill zone at Kent were mainly white and middle-income, with draft deferments. Some had aggressively challenged the Guard’s presence, but many were simply by-standers, handing around on the grass between classes. One target was a ROTC cadet, who had just left a military science class before getting a bullet in the back. Another student, who survived, was paralyzed for life. (For first person detail, see Kent State: Death and Dissent in the Long Sixties by Thomas Grace, a history major who was also wounded that day.)

In newspaper photos and TV coverage, the dazed Kent State survivors looked like college students everywhere. As one strike organizer at Middlebury College in Vermont recalls, those images “created a sense of vulnerability and crisis that many people had never experienced before.”

The resulting calls for campus shutdowns came from every direction. Students at MIT generated computer print-outs of schools on strike for the National Student Strike Information Center, operating at Brandeis nearby. Soon the list was 10-feet long. Despite its initial association with militant protest, most strike activity was peaceful and legal. It consisted of student assemblies taking strike votes, and then further mass meetings, speeches and lectures, vigils and memorial services, plus endless informal “rapping” about politics and the war.

The strike brought together a wide range of undergraduates, faculty members, and administrators—despite their past disagreements about on-campus protest activity. Thirty-four college and university presidents sent an open letter to Nixon calling for a speedy end to the war. The strike also united students from private and public colleges and local public high schools in working class neighborhoods. On May 8, in Philadelphia, students from many different backgrounds and neighborhoods marched from five different directions to Independence Hall, where a crowd of 100,000 gathered outside. City high school  attendance that day dropped to 10% of normal, according to the Philadelphia Inquirer.

Hamilton College professor Maurice Isserman, co-author of America Divided: The Civil War of the 1960s, believes that more moderate students “who were anti-war but turned off by the rhetoric of the late ‘60s New Left emerged as the leading force” in this upsurge. Many new recruits did, indeed, gravitate toward anti-war lobbying, petitioning, and electoral campaigning, rather than further direct action.

Yet the panel created by Nixon to study campus unrest in the wake of Kent State (known as the Scranton Commission) viewed the politicization of higher education as a victory for student radicals. According to its later report, “students did not strike against their universities; they succeeded in making their universities strike against national policy.” To prevent that from happening again and get campus life back to normal, the commissioners agreed that “nothing is more important than an end to the war.”

In a Boston Globe interview on the 30th anniversary of Kent State massacre, Isserman argued that the May, 1970 events were “the product of unique circumstances that, not surprisingly, provoked outrage from a generation of students already accustomed to protest and demonstration. It’s unlikely that we’ll ever see a movement quite like this again.”

That was certainly true for the next few years, as the Vietnam war wound down and Richard Nixon, after winning re-election, conspired his way to impeachment, public disgrace, and forced resignation in 1974 over the Watergate scandal.

Yet, over the past two decades, college and high school students have walked-out again, across the country, in highly visible and coordinated fashion. In March, 2003, they poured out of 350 schools to protest the impending U.S. invasion of Iraq. Fifteen years later, about one million students at 3,000 schools walked out to join a 17-minute vigil, organized in response to the mass shooting at Parkland High School in Florida. And just last September, hundreds of thousands of students left school to join rallies and marches organized as part of a “Global Climate Strike.”

Sooner or later, face-to-face student organizing and mass rallying will resume again, around political demands made even more pressing due to a deadly pandemic. (For a good overview of those issues, see https://jacobinmag.com/2020/04/for-higher-education-a-return-to-normal-isnt-good-enough?)  When school is back in session, the history of a strike occurring after the shadow of death fell on campuses fifty years ago, thanks to Richard Nixon, may become more relevant to challenging “national policy” under the equally toxic Donald Trump.

Steve Early was a participant in the May, 1970 student strike against the Vietnam war and later served as Vermont Field Secretary for the American Friends Service Committee. He is a longtime union activist and author of four books about labor or politics. He is collaborating on a forthcoming book about veterans for Duke University Press. He can be reached at Lsupport@aol.com

Note: readers can connect with a Kent Massacre Online Anti-War Commemoration at: https://www.facebook.com/groups/2850853628362946/

A previously planned official commemoration in Kent, Ohio has been cancelled due to the coronavirus related national campus shutdown.