New meanings for "going viral", including the lockdown showdown, a national rent strike, and a rant you have to experience! 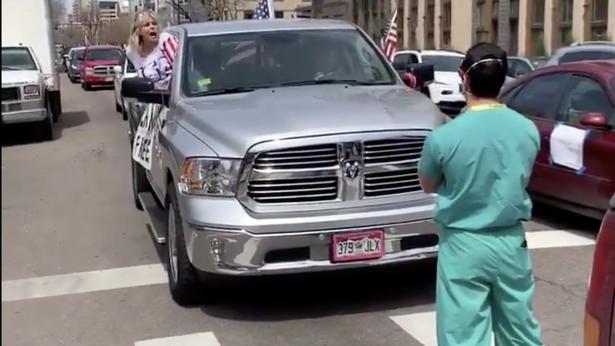 A healthcare worker in a standoff in Denver with a protester who wants the stay at home orders lifted, credit: Scott Dworki/Twitter

From Arizona to Virginia, health care workers tell protesters to "stay at home."

By Will Sommer and Jackie Kucinich
April 22, 2020
The Daily Beast

The rallies in state capitals are featuring lots of the same language and some of the same people involved in the movement to scare the public against vaccinations.

Unions Are Saving Our Lives Every Day

Union members have been fighting for their own lives, as they should be, but also for all of us, whether or not we are union members. If not for their efforts, many more people would surely be dying.

Big Pharma Wants All the Action

A Yale researcher poised to start a crucial clinical trial received an ominous email from a pharmaceutical company. “There is undoubtedly a financial motivation,” he said—and there could be millions on the line.

By Natasha Lennard
April 25, 2020
The Intercept

With millions unable to pay for housing next month, organizers plan the largest rent strike in nearly a century.

The Virus and Anti-Asian Violence

Advocates have collected nearly 1,500 reports of anti-Asian racism in the U.S. over the past month.

Senior Republicans and President Donald Trump’s campaign are wrestling with how to best position him for November as the coronavirus poses a grave threat to his reelection.

Over its 47-year history, brownstone Brooklyn’s bastion of 1970s idealism has stayed remarkably resilient. But the coronavirus has shaken the community-minded store to its very foundation.

"Ticked Off Vic" DiBitetto is a performer, so he’s used to drawing in a big crowd – but he didn’t quite expect that a recent video he made would be viewed over 10 million times.