Illinois cannot act to provide relief for its renters struggling under the coronavirus pandemic because of a 1997 rent control ban pushed by the Right. But this could change if its governor, J. B. Pritzker, used his emergency powers to lift that ban. 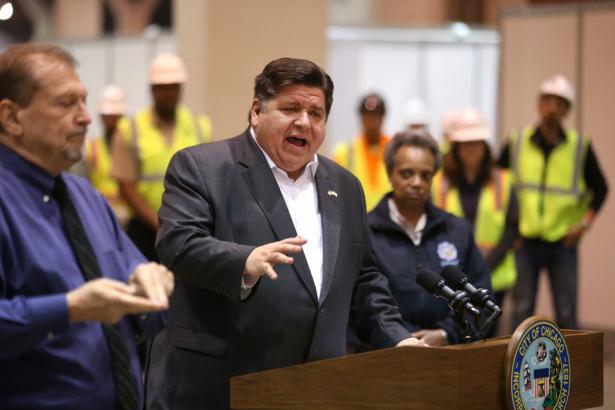 Chicago mayor Lori Lightfoot stands by as Illinois governor J. B. Pritzker speaks during a press conference at the COVID-19 alternate site at McCormick Place on Friday, April 3, 2020 in Chicago, Illinois.,Chris Sweda-Pool via Getty

Chicago mayor Lori Lightfoot recently signed off on $1,000 rental assistance checks to two thousand Chicagoans. In the throes of an unprecedented economic crisis, with a third of American renters not able to make April rent, this alleviated the rent burden for about 0.1 percent of Chicago’s renters.

This lottery is scattershot, even cruel, and Lightfoot isn’t exactly a champion for Chicago’s working class. But her hands are tied. Legally, Illinois’s ban on municipal rent regulation bars the city from legislating any universal rent relief program. As the coronavirus-induced economic shutdown implodes the capitalist housing system, the mayor is suggesting landlords act with “grace,” unable to do more due to a rent control ban that the Illinois state legislature’s Democratic trifecta has failed to lift.

While governor J. B. Pritzker has halted eviction enforcement, evictions continue to be filed, ready to be enforced when the shelter-in-place order ends and staining tenants’ records. Tenants, unsurprisingly, are taking things into their own hands, with rent strikes beginning to spread.

It’s clear what Pritzker needs to do. To prevent a disaster, he should use his emergency powers to lift the ban on rent control and declare rent and mortgage payments forgiven for the duration of the crisis.

The Billionaire Ban on Rent Control

Illinois’s Rent Control Preemption Act, passed in 1997, prohibits Illinois cities from enacting any form of rent regulation. In a deep dive into its history, Maya Dukmasova notes that the act is a verbatim copy of a model rent control bill found on the website of the American Legislative Exchange Council (ALEC), a libertarian, corporate-funded think tank associated with the Koch family that pushes model legislation to state legislatures.

For years, the Lift the Ban Coalition, which comprises community organizations, unions, and tenants, have called Illinois’s housing market a crisis, with more than 27 percent of the state’s population spending more than half their income on rent. For years, the “reverse Great Migration” of hundreds of thousands of black and Latino Chicagoans, who cite housing costs as the number-one reason for leaving the city, wasn’t enough to make politicians move urgently to lift the ban — even politicians who openly support lifting it.

But suddenly, the sense of urgency to lift the ban is spreading to unlikely places, as the Chicago City Council Latino Caucus, which includes both real estate allies and socialists, called for the ban to be lifted and for rent and mortgage payments to be forgiven throughout the duration of the crisis, plus three months. Yet Governor Pritzker has insisted his emergency powers don’t extend to lifting the rent control ban. Despite legal analyses to the contrary, he claims state law can only be repealed by the state legislature. But they cannot assemble, due to social distancing, nor does the state constitution allow for virtual voting.

The Billionaire Governor Who Failed to Lift the Ban

Taking the Illinois governorship in 2019, Pritzker, an heir to the Hyatt hotel fortune, surpassed President Donald Trump as the richest sitting American politician, with a net worth of more than $3 billion. While campaigning, Pritzker pledged support for lifting the ban — an issue that was gaining attention due to the overwhelming passage of nonbinding referenda supporting its lift in a geographically diverse swath of Chicago wards and precincts.

“We should empower local elected officials and stakeholders to address their community’s housing needs, ensuring every Illinois family has access to affordable housing and the opportunity to build a better life,” he said. But as he gathered accolades for presiding over a number of progressive wins in the 2019 state legislative session, Pritzker kept silent on rent control. Praised for his swift response to COVID-19 and sparring with the president on Twitter, Pritzker has avoided any action on housing beyond the temporary ban on eviction enforcement.

And so, with a Democratically controlled state house and senate, and a Democrat in the governor’s mansion, Illinois has not yet repealed a 1997 rent control ban that was copied and pasted from a secretive, conservative lobbying group that counts among its monied clientele the gun lobby, union-busting corporations, and abortion foes. The state representatives, Democrats among them, who voted against lifting the ban last year seem to think that ALEC represents their constituents’ wants and needs. Perhaps it’s because most continue to cash big checks from the real estate lobby.

Shortly before the COVID-19 economic collapse, a prominent landlord association identified Illinois as “Threat Level 1” for potential rent control legislation, warily noting that “Chicago teachers included rent control as a demand for settling their recent strike.” But as the Lift the Ban Coalition lobbied legislators whose districts suffered from high rent burdens and displacement, some legislators derided the referenda results as “a reaction,” or asserted that voters didn’t understand what they were voting on, or referred to phantom calls from tenants desperate to protect the ban.

Those legislators may soon change their tune, as rent strikes begin to spread. Fittingly, the most high-profile rent strike in Chicago, against a corporate landlord blamed for swift gentrification in the Hyde Park neighborhood, is taking place blocks from the office of Rep. Curtis J. Tarver II, one of Chicago’s most vocal legislative opponents of rent control.

But the broader problem remains: tenants have little organized political power, and landlords have a lot. Real estate power in Springfield has set the state’s housing market up for utter collapse in this pandemic, and liberal politicians’ failure to call that power out means they bear responsibility, too. Amid the crisis, the real estate lobby is mobilizing to defend its interests; a leaked landlord associations’ Zoom call included former alderman and current lobbyist Joe Moore, assuring landlords that their relationships in Springfield were strong.

Rent control, as proposed by the Lift the Ban coalition, would help change that imbalance. Separate from their simple bill to repeal the ban is their legislation for rent control, which doesn’t merely regulate rents — it creates democratically elected rent control boards, which could expand their influence and power as the years go on.

But in addition to the legislative efforts, something else unusual is happening: tenant organizers have found themselves in the city’s media spotlight. The Autonomous Tenants Union, which primarily organizes on the North Side, and Tenants United, which primarily organizes on the South Side, have cautioned about the deeply risky nature of a rent strike but released guides to tenants organizing during the COVID-19 crisis. They’ve won building-specific victories against individual landlords in the past, but now their wider goals are becoming more visible: a unionized tenant movement with collective bargaining leverage against landlords, and an end goal of a de-commodified housing system.

April’s Chicago City Council meeting showed the contours of the fight ahead: the public comment section was almost evenly divided between tenants demanding rent cancellation and landlords demanding massive subsidies paid directly to them. The politicians stalled, choosing not to meet for another month and table even a weak rent deferment ordinance.

But May 1 can’t be stalled. Rent is due yet again. The working class, bearing the brunt of the death and unemployment toll, depends on full rent cancellation just for its survival. Through the use of his emergency powers to lift the ban and cancel rent and mortgages, Pritzker is the only figure who can ensure that survival. Every day that passes without taking action means more dread, more uncertainty, and more debt.

Since 2010, Jacobin has emerged as a leading voice of the American left. Every month we reach millions of people, most of whom browse online for free.

We are committed to ensuring that socialist thought is both as rigorously produced as possible and available for public use. Over the past year, our website registered 20 million visitors, offering them perspectives to not just understand, but change the world.

But even as our audience grows, with rising postal costs and all the other expenses involved with producing a print magazine, we have to count on you, our most committed readers, to thrive.

As a 501(c)(3) nonprofit organization, donations to Jacobin Foundation are tax-deductible.