Harris, Sanders, and Markey Bill Would Provide $2K/Month for Rest of Covid-19 Crisis

"If we can bail out large corporations, we can make sure that everyone in this country has enough income to pay for the basic necessities of life." 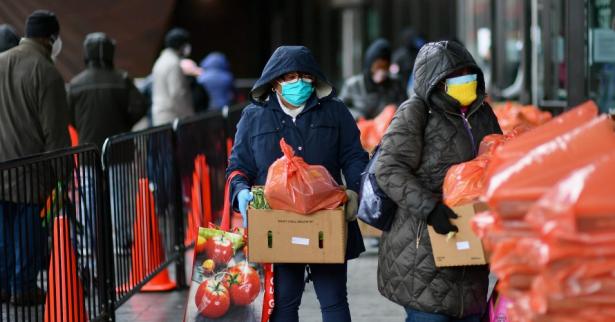 People pick up food at the New York City mobile food pantry on the Barclays Center plaza on April 24, 2020 in Brooklyn, Angela Weiss/AFP via Getty Images

Sens. Kamala Harris, Bernie Sanders, and Ed Markey introduced legislation Friday that would provide most U.S. households with $2,000 monthly payments per person for the duration of the Covid-19 crisis, a proposal that comes as Democratic and Republican leaders continue to resist sending additional cash directly to people even as corporations get trillions in no-strings-attached bailout funds.

"During this unprecedented crisis, Congress has a responsibility to make sure that every working-class household in America receives a $2,000 emergency payment a month for each family member," said Sanders (I-Vt.). "If we can bail out large corporations, we can make sure that everyone in this country has enough income to pay for the basic necessities of life."

"Providing recurring monthly payments is the most direct and efficient mechanism for delivering economic relief to those most vulnerable in this crisis, particularly low-income families, immigrant communities, and our gig and service workers."
—Sen. Ed Markey

The bill, titled the Monthly Economic Crisis Support Act (pdf), would send $2,000 in direct payments to adults who earn less than $120,000 a year. The bill would send $4,000 per month to married couples who file taxes jointly and an additional $2,000 for children and dependents up to three.

Payments would be retroactive back to March and continue until three months after the Health and Human Services secretary declares that the Covid-19 public health emergency has ended. The bill explicitly bars debt collectors from seizing the rebates and "ensures the homeless and foster youth receive payments," according to a one-page summary (pdf) released by Harris' office.

Millions of Americans don't know how they're going to pay for groceries, rent, utilities, or medicine.

Our legislation with @SenKamalaHarris and @SenMarkey provides every working family with $2,000 a month, per person, until this crisis is over: https://t.co/XIO5k47RJD

"Providing recurring monthly payments is the most direct and efficient mechanism for delivering economic relief to those most vulnerable in this crisis, particularly low-income families, immigrant communities, and our gig and service workers," Markey (D-Mass.) said in a statement.

The trio of senators unveiled their proposal in the wake of Labor Department figures showing that a record 20.5 million people lost their jobs in April and the U.S. unemployment rate soared to 14.7%, the highest level since the Great Depression.

Harris said the new legislation is an attempt to remedy congressional failure to do "nearly enough to meet the needs of this historic crisis."

The CARES Act, which President Donald Trump signed into law in late March, authorized one-time $1,200 cash payments to most U.S. households, excluding millions of immigrants and their spouses, dependent college students, and others.

"The one-time $1,200 check that many Americans recently received is not nearly enough to pay the rent, put food on the table, and make ends meet," said Sanders.

It's not clear whether the new proposal will gain any traction in ongoing talks over the next coronavirus stimulus package, despite the popularity of recurring cash payments among U.S. voters. Trump and Republican members of Congress have signaled opposition to any additional direct payments.

"Alongside other important programs, cash payments give families an income floor so that no American is one missed paycheck away from living on the street."
—Natalie Foster, Economic Security Project

"Well people in hell want ice water too," Sen. John Kennedy (R-La.) said when asked about calls for another round of stimulus checks.

"House Speaker Nancy Pelosi (D-Calif.) said last week that Congress needs to figure out the best way to distribute money, musing that 'perhaps' a 'guaranteed income' for people would be worth considering," HuffPost reported. "But a spokesperson for Pelosi said she had in mind something more like the Paycheck Guarantee Act from Rep. Pramila Jayapal (D-Wash.), which would grant money to employers to pay wages and prevent layoffs—not pay people directly."

In a statement endorsing the proposal from Harris, Sanders, and Markey, Economic Security Project co-chair Natalie Foster said that "as Congress considers the next relief package, $2000 monthly payments must be part of the equation."

"Alongside other important programs, cash payments give families an income floor so that no American is one missed paycheck away from living on the street," said Foster.