Statement for a Feminist Foreign Policy to Confront the Coronavirus Pandemic

This pandemic calls for us to challenge our militarized notion of security. There is ample evidence that a militarized response will further criminalize marginalized communities of color who are often targets of over-policing and imprisonment. 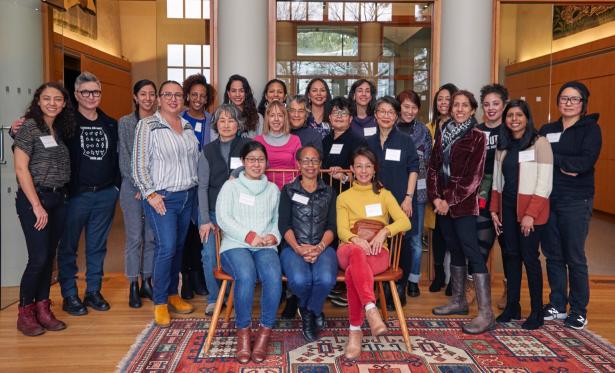 NOTE: In February, three organizations — MADRE, Women Cross DMZ, and Grassroots Global Justice Alliance — convened a group of 23 women and gender nonconforming people from across the United States in order to engage in a cross-movement dialogue on our collective work against militarism and war in order to examine, challenge, and reimagine US foreign policy.

While our convening occurred before the coronavirus became a global pandemic, this public health crisis has only amplified the need to redistribute resources, restructure society, and create long-term solutions that prioritize the true needs of all people.

The following statement represents the beginning of a larger conversation to redefine our sense of “national security” using the framework of a feminist foreign policy for peace and justice.

The coronavirus pandemic has revealed the urgent need to address the impact of US militarism and wars at home and abroad, and to redefine our collective sense of “national security.”

To date, more than 1 million people have been sickened worldwide, and in the United States, thousands of people have died. Meanwhile, healthcare workers lack proper protective equipment and hospitals face shortages of diagnostic tests and ventilators. Lack of affordable healthcare and insurance in the US has exacerbated conditions of precarity for the most vulnerable among us, including people without permanent shelter, the working class, people with disabilities, and sex workers.

While US officials frame the effort to halt the coronavirus pandemic as a “war” — healthcare workers are “on the front line” fighting an “invisible enemy,” and Trump has called himself a “wartime president” — this is not a war but a global health emergency that necessitates urgent international cooperation.

This crisis reveals a deeply broken notion of “national security.” The US spends just $7 billion on the Centers for Disease Control and Prevention — a decline of about 10 percent over the last decade — while spending on the US military exceeds $900 billion. This pandemic calls us to redefine our sense of “national security” using the framework of a feminist foreign policy for peace and justice.

As transnational feminists united against militarization and war, we call for a feminist foreign policy that reorients the United States’ role in the global community to prioritize interdependence, connection and cooperation, justice, valuing people and the planet over profit, and protecting the most vulnerable among us. We envision a radically reoriented US foreign policy that addresses the root causes of war and militarism, which wages violence at home and abroad. This calls for aligning the concerns of US communities of color and Indigenous Peoples with peace and justice movements in places impacted by US militarism and the legacies of colonialism. Building this vision requires us to engage in cross-movement and cross-border conversations that center the voices and leadership of women of color, Indigenous Peoples, queer, and gender nonconforming people committed to gender justice and peace — voices that have been absent from dominant discourses on foreign policy.

We must recognize that the militaristic framework has failed us both domestically and internationally. Massive investments in the Pentagon have wreaked violence and instability around the world through the support of dictatorships, coups, the “war on drugs”, “war on trafficking”, and settler colonial states, resulting in the displacement of millions of people worldwide. The immigrant “caravan” arriving at the US border, for example, is directly related to decades of US foreign policy throughout the Americas. We also see this in the militarized response to the coronavirus pandemic, such as continuing ICE raids in US cities and the increased military presence at borders, refugee camps, and check-points. Anti-Asian sentiments are particularly on the rise during this pandemic, leading to a sharp rise in anti-Asian violence, as well as hawkish anti-China rhetoric and proposals that are further exacerbating tensions between the US and China.

This pandemic calls for us to challenge our militarized notion of security. While many may applaud the use of the military and police to build emergency hospitals and enforce social distancing, we are concerned that this amplified militarized state, as conditions worsen, will be used to quash social movements. There is ample evidence that a militarized response will further criminalize marginalized communities of color who are often targets of over-policing, mass surveillance, and imprisonment. Leaders around the world are already seizing this opportunity to expand their executive powers, with troubling implications for equity and justice.

We call for investments in a regenerative economy to build a more socially fair and ecologically sustainable society. This must include recognizing the gendered impact of the pandemic as nurses, teachers, domestic workers, caregivers, cleaning and food service workers — roles typically occupied by women — are now being recognized as the true backbone of society. Yet this labor is some of the most undervalued and least paid. Women already perform a majority of unpaid labor in the home — which has increased and intensified with social distancing and stay-at-home measures — while continuing to maintain their jobs with little support for, or reprieve from, their added caregiving responsibilities. And for millions of women and gender nonconforming people currently forced to stay inside, home is the most dangerous place.

It is nearly impossible to control the virus in communities devastated by warfare, where hospitals lie in rubble and water treatment plants have been destroyed. That’s why Yemeni, Syrian and Afghan women demanded ceasefires weeks ago. UN Secretary-General António Guterres followed suit, calling for a global ceasefire. This call provides a historic window for a new US foreign policy built on strengthening global cooperation and diplomacy, including facilitating coordinated, mutually beneficial responses between nations. Other countries are modeling this kind of leadership, including Cuba, which is sending doctors overseas, and China and South Korea, which are shipping test kits and other critical supplies. As the wealthiest nation in the world, the United States has the responsibility to assist impoverished countries facing the pandemic — with no strings attached. If a vaccine is developed in the US, it must be freely shared with the global community.

A cornerstone of US foreign policy is sanctions, which is war by other means. Given the interconnectedness of the global economy, sanctions are another lethal form of militarism, impeding economic development and hampering delivery of urgently needed humanitarian aid, life-saving medicine and medical equipment.

To rectify historic injustices and contribute to a world rooted in equity over inequality, care of the planet over exploitation of resources, and cooperation instead of domination, we urge you to join us in the immediate call for the following actions:

Now is the time to join together to create the change we envision. By mobilizing ourselves and our communities, we can democratize US foreign policy, not only for our own collective security, but for the future of all peoples and our planet.

Brittany Ramos DeBarros, About Face — Veterans Against the War

We thank the Rockefeller Brothers Fund (RBF), Open Society Foundations, and the RBF Pocantico Center for their support of this groundbreaking convening.