The Pandemic Proves We Need Single Payer, Medicare For All

From our vantage point at the beginning of this pandemic, it is not hard to see how it would have been different if we had had a Medicare for All system before the virus arrived.

May 11, 2020 Marilyn Albert Portside
Printer friendly
The Pandemic Proves We Need Single Payer, Medicare For All Published May 11, 2020 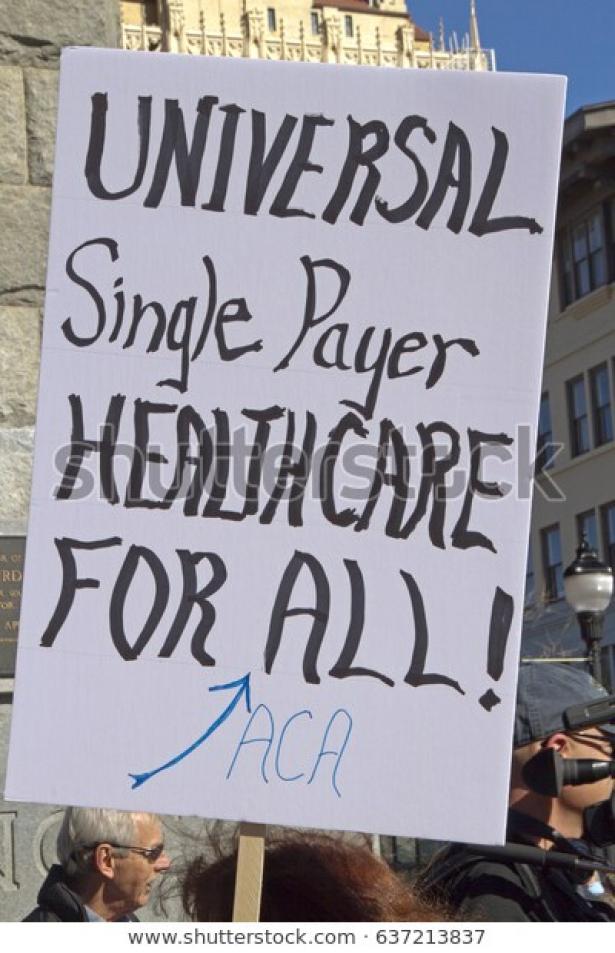 It is often said that events like the COVID19 pandemic open minds to bold ideas previously not accepted.  We can see this every day -- with both immediate and longer-term solutions coming into clearer and clearer focus.  We are also learning more about the crisis before the crisis – in the hospitals, nursing homes, working class communities, and especially among oppressed people.

Medicare for All Pre-Pandemic

Think back to the Presidential primary debates of three months ago and their frustrating discussion of Medicare for All.  But then, exit polls in each primary, whether Sanders won or lost, showed a majority of Democratic voters favoring Medicare for All.

As COVID19 has circled the world, the whole discussion about Medicare for All, single payer is shifting -- as the people ask, how could this happen? How can we prevent it from happening again? When should publicly accountable government replace profit making? These are no longer theoretical questions.  The utter failures of the profit-based health care system are right before our eyes every day.

When the symptoms of the coronavirus appear, everyone is told “don’t come to the Emergency Room!  Call your doctor!”  -  which is correct, except that at least 25% of Americans do not have a primary care doctor they can just call.  For those with underlying chronic conditions – the comorbidities that make the virus so dangerous– the COVID crisis has displaced their regular sources of care – doctors’ visits of all kinds have dropped precipitously,  so the chronically ill may sicken more quickly, becoming much more vulnerable to the virus.

When we are so sick that we succeed in making our way into a hospital, we encounter an industry functioning very poorly.  The whole idea of “surge capacity” in hospitals has been a joke for 30 years – the United States has the lowest number of hospital beds per capita than any other country. Ever expanding hospital networks, including those owned by private equity capital, are regularly closing unprofitable hospitals in both urban and rural areas, while simultaneously building brand new hospitals in well insured neighborhoods. Long standing hospitals have been subjected to continuous cuts of departments, units, and beds for 30 years.   Patients lining hallways of ERs even for days was the crisis before the crisis -- ER staffs have coped with this for many years. “Just in time staffing” of hospitals has been refined to the point where many nursing workers do not know their work schedule for the upcoming week. Newly minted registered nurses have trouble finding full time jobs.

Hospital systems have been in ruthless competition with each other for market share.  Huge reductions in “covered lives”, as the insurers call them, resulting from the pandemic’s unemployment explosion, will further destabilize the hospitals’ finances. The bailout of the hospitals in the first round of COVID legislation has been turned over for administration to the biggest profit-making insurance company, United Health! How these funds will be used has been a mystery so far.  Supposedly a lot of COVID care will be directly paid for by the government to the hospitals, but we don’t know yet how much of the cost of care will be billed to patients.  Bills for critical care could be hundreds of thousands of dollars, and many ER bills will be unpaid by insurance companies because ER doctors have been moved out of hospital networks, again a product of private equity capital’s intrusion into health care. This is the cause of so-called “surprise billing”.

As of mid-April, about 9000 health care workers in the United States have been infected.  We know many have died, as have transportation workers, grocery workers, and other “essential workers”. Some in the industry suspect that hospital managements are hoarding personal protective equipment and not distributing it to workers who need them immediately.  This is consistent with how hospital managers have inured workers to worsening conditions for years, telling staff  “this is only temporary, do the best you can” as they hope workers get used to it and save the hospital money long term.

10,000 residents of skilled nursing facilities are dead from the virus as of the last week of April. In California, 40% of COVID deaths have been attributed to elder care facilities.   70% of nursing homes are run for profit, and many have been the sites of bitter union struggles.  The vast majority have been chronically understaffed, with extremely high turnover rates. Before COVID, 400,000 residents died due to nursing home infections nationally every year.  Even in unionized homes, one nursing assistant often cares for 15 patients during a shift.  Family members who are accustomed to doing their own checking on conditions cannot go inside the facilities now.

In mid-April, we began learning of extremely high infection rates among both among symptomatic and asymptomatic residents and staff members in the few homes where everyone has been tested. Another big problem is that infectious and non-infected nursing home and rehabilitation residents are being mixed together, which will possibly prove disastrous.  The Governors of California and Connecticut have called in the National Guard to do inspections, fast COVID testing, isolate the infectious, and care for the residents at risk. Governments cannot rely on reports filed by those eldercare facilities which are dishonest – which is way too many!  More emergency action must be taken to save our elders at the epicenter of the crisis!

Medical racism has been a crisis before this crisis. But the data we are seeing in recent weeks is shocking. Chicago, Louisiana, and Milwaukee are areas where the African American death rate is hugely higher than the percent of Black people in the general population, sometimes 40 to 70% of all total deaths!  In South Carolina, where African Americans compose 27% of the population, they represent 55% of the COVID deaths.   The death rate for Latinos in New York City is twice that of whites. The Navaho Nation ranks third in deaths following New York State and New Jersey.

The immigrant detention camps – hardly mentioned by the media lately – could be COVID breeding grounds. The immigrants must be moved into humane living conditions immediately.

Being in prison or a jail could be a death sentence, no matter why the incarcerated person is there or how short a time.   The ACLU has done a study showing that mass incarceration will add 100,000 deaths unless there is substantial reduction of the jailed population immediately.

Dr. Fauci was wrong when he was asked about the racial disparities in the pandemic and he said nothing can be done right now to address this other than give everyone good care.

There are immediate steps which can be taken to reverse the death toll in oppressed communities and these steps must be called for!  This is an area where the Medicare for All movement should coalition with community and worker leaders. Such steps include:

· Immediate expansion of Medicaid in the states which have refused to do it.

· Immediate COVID testing, and culturally competent COVID education in neighborhoods and workplaces where people are too crowded together.

· Early medical care when symptoms appear in the people, as well as voluntary, comfortable isolation of infectious persons, accompanied by continuous testing of their status.

· New plans of action for chronic illnesses to improve the peoples’ health as fast as possible. Hypertension, diabetes, and chronic lung and heart diseases must be addressed as an emergency.

Some economists predict 40 to 50 million people will lose their jobs as a result of the pandemic, losing their healthcare also. This makes the biggest anti-Medicare for All talking point -- that everybody loves their employer-paid insurance -- now practically useless to our opponents.  People are convinced that we need universal health care not related to employment.

There is good news in two new polls. The first, done by Politico the last week of March – shows that from February to March, somewhat early in the pandemic in the US – support for Medicare for All rose by 9 points.  And that is following months of massive attacks on Medicare for All during Bernie Sanders’ primary campaign.  The second poll, released by Hill-Harris on approximately April 24th, showed that 88 percent of Democrats favor Medicare for All. Biden is being told his previous position is politically untenable.  Bernie Sanders and other progressive forces are said to be in negotiation with Biden over his health care position in light of new levels of support for Medicare for All.

Our Medicare for All Legislation In A New Light

We can scroll through HR 1384, Congresswoman Jayapal’s Medicare for All Act of 2019, and see how each section of the bill now resonates with meaning in new ways:

· Everybody will be covered equally – the government will pay the bills – no premiums, deductibles and copays, which are the costs that are keeping people from presenting for care until they are extremely ill from COVID and cause people to delay care for chronic conditions.

· What has been sorely lacking in the United States - planning, cooperation, and coordination are fundamental to a single payer system.  Everyone could choose their providers freely, with hospitals competing only on the basis of the quality of their care.  Although most hospitals would still be privately owned under our current Medicare for All proposals,  decisions about opening and closing hospitals would be made by the publicly accountable governing structures on a national, state, and regional basis, not by hospitals or their owners themselves.

· Our single payer system would participate in a global public health network, likely led by the World Health Organization of the United Nations.  Data collection from health facilities, universities, and localities would be uniformly collected by states and the Federal government, facilitating much more efficient medical research, absent any profit motive. Thus, American health research would be more sharable and useful to the rest of the world.

Another World Is Possible!

From our vantage point at the beginning of this pandemic, it is not hard to see how it would have been different if we had had a Medicare for All system before the virus arrived.

Thousands have probably died unnecessarily because of the Trump Administration’s malfeasance, corruption, and incompetence.

Now is our chance – if we act with confidence and sharpen our tactics – to convince the people to support publicly financed, accountable, unified, national health insurance – a big structural change, which could be one of many.  Another world is possible with COVID19 and Donald Trump gone!