Spare CUNY, and Save the Education our Heroes Deserve

During the Great Depression, local, state, and federal policymakers refused to cut and invested. Doesn't the present moment call for similar visionary action for public institutions like CUNY and the people they educate for generations to come? 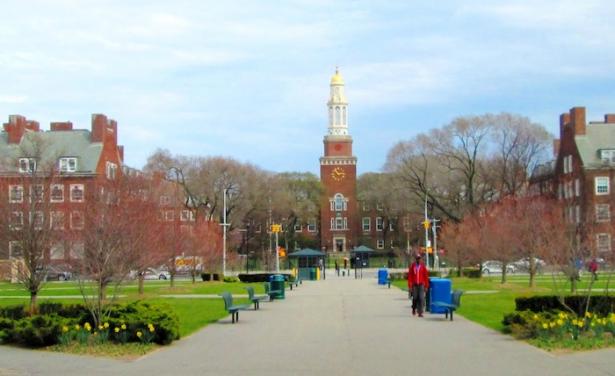 Brooklyn College, one of CUNY's 11 senior colleges., Beyond My Ken // City Limits

We teach heroes. As professors at Brooklyn College (CUNY), our students staff the local bodega, stock shelves at Target and Whole Foods, drive cabs, and deliver food to patients at Mt. Sinai Hospital. They work for the MTA, the DOE and EMS. They keep New York City running in this time of crisis.

Our students have always been persevering—working 30-40 hours a week, looking after family, and still taking five classes each semester, delighting in discussions from William Faulkner to physics, speech therapy to immigration policy to the history of Brooklyn’s civil rights movement. Hailing from Pakistan, Russia, Trinidad and the Dominican Republic, from Bed Stuy to Borough Park to Coney Island, they make the clichés of New York as a city of strivers and dreamers come to life.

But of course, we’re learning that the term “hero” can be a rhetorical sleight of hand—a form of praise (and applause every evening at 7:00), but not actual material recognition—no guarantee of living wages, health care, safe working conditions, or a fully funded education. Heroes, apparently, can make due with less.

Our rainbow of students (Brooklyn College’s student body in 2019 was 19 percent Black, 22 percent Latinx, 19 percent Asian and 25 percent white, many of whom are white immigrants) have long made due with less. The majority of CUNY students come from households making $40,000 per year, or less. Before the pandemic, a study showed 48 percent of students experienced food insecurity within the month and 14 percent homeless in the past year. And decades of underfunding CUNY have produced overflowing classrooms, broken bathrooms, packed computer labs, and leaking ceilings, another obstacle students confront as they try to work their way up.

While many CUNY students are laboring to keep the city functioning, most of the rest of their classmates have lost jobs. The jobs in service and retail that students worked to put themselves through school and support families are gone. Nearly a third of students in our classes have sick family members, and some have lost loved ones. Many have no health insurance. What this crisis looks like on the ground at CUNY is staggering.

And still they persist. They share wi-fi to show up on Zoom for lively class discussion, shower congratulations in the chat when a classmate announces his acceptance into law school, and send response papers in the middle of the night when the family computer is free. They apologize that a paper is late because their beloved was taken to the hospital, worry that they are “failing themselves” because altered family responsibilities make concentrating on schoolwork extraordinarily hard, and admit how much anxiety about lost jobs and loved ones overwhelms them. But still, over and over, they tell us how thankful they are for the opportunity to learn.

CUNY— originally founded in 1867 as theFree Academy (“Open the doors to all—Let the children of the rich and the poor take their seats together”) and now comprised of 25 campuses across the five boroughs serving 275,000 students— has long been an engine of social transformation. Generation upon generations of New Yorkers, particularly white New Yorkers, have used the “poor man’s Harvard” as a stepping stone to the middle class. Indeed, in a survey of colleges providing social mobility to their students, nine of the top twenty in the nation today are CUNY schools.

But forty years of disinvestment has cut this prized public institution to the bone. This divestment began shortly after CUNY, in 1969, instituted a policy of open admissions and started to educate a much truer racial, ethnic, and economic cross-section of New Yorkers. Until then, CUNY had been over 90 percent white, in a city whose high schools by that point were half African American and Puerto Rican. Six years later, CUNY’s hundred-year practice of free tuition ended. And retrenchment began.

Cuomo, both father and son, have devastated the institution. Mario Cuomo, who served as governor from 1983 to 1994, demanded huge cuts in the early 1990s, including a $53 million cut in CUNY’s operating budget, a $500 tuition increase, and sizable cuts to state financial aid. Then in 1992, claiming financial exigency, he declared retrenchment and terminated employees on a number of campuses. Mario’s son Andrew, elected in 2010, has amplified his dad’s record of gutting CUNY. Increasingly, state investment has been replaced by rising tuition: it now costs over $6,000 to attend the senior colleges.

While Gov. Cuomo is currently enjoying national adulation with his commanding made-for-tv press conferences, beneath the gloss is a more malignant side. He has cut CUNY’s funding relative to increasing enrollments and rising costs every year he has been in office. One particularly shady maneuver is that New York’s Tuition Assistance Program (TAP) no longer covers the full cost of tuition. Cuomo makes colleges bridge the difference ….leading to broken-down buildings, burgeoning class sizes, and further tuition raises.

Gov. Cuomo consistently balances the budget on the backs of students. His persistent refusal to consider raising revenue by taxing the super-wealthy, or even thinking boldly in the moment, such as using CARES ACT provisions through which the Federal Reserve could buy debt fromstates and municipalities to avoid austerity, means that institutions like CUNY, and the vulnerable communities they serve, are set to take a debilitating hit. Indeed, on May 5, he announced a partnership with the Gates Foundation to “reimagine” education in the state and his task force includes no CUNY students or professors (or NYC teachers or high school students).

In fact, in fear of Cuomo’s budget revisions (the state has reserved power to make three budget adjustments over the next year in response to expected revenue shortfalls), the Brooklyn College administration, where we teach, demanded that all departments and programs preemptively slash their course offerings by 25 percent and raise class sizes. Other campus administrations including the College of Staten Island and John Jay College are similarly following suit, in some cases demanding blanket firings of hundreds of adjunct instructors. If they follow through, adjunct faculty, lab technicians, and other staff members would lose work—and health insurance. Class sizes will skyrocket. The threat of Cuomo’s budget will further devastate the education of the hundreds of thousands of students who attend CUNY.

We are at a crucial juncture in this country. These cuts don’t have to happen; in fact, this could be a moment to reverse the decades of debilitating disinvestment— lifting up the very people whose labor, smarts, and persistence make New York what it is. CUNY, in many ways, embodies the ideals of opportunity and transformation through education that this society holds dear. And yet, this history of disinvestment and devastating current budget cuts also reveal how shallow our commitments to equality and honoring our essential workers seem to be.

This must begin with Governor Cuomo’s assurance of no budget cuts to CUNY. New York state lawmakers must close the TAP gap, commit funds to hire 1,000 new full-time faculty, increase CUNY’s capital budget to pay for long-needed repairs and green retro-fit our crumbling campuses and move aggressively toward atuition-free model. Doing so should be coupled with a demand for Congress to enact a higher education-specific federal relief package for academic workers and students.

This is not some pie-in-the-sky fantasy. During the Great Depression, local, state, and federal policymakers refused to cut and invested instead, building three new CUNY campuses. As President Franklin Roosevelt explained at the 1936 dedication of Brooklyn College: “We not only have to put to work many thousands of good people who needed work; but we are also improving the educational facilities of this great Borough, not just today but for generations to come.”

Doesn’t the present moment call for similar visionary action for public institutions like CUNY and the people they educate for generations to come?

[Jeanne Theoharis is a distinguished professor of Political Science; Alan Aja is an associate professor of Puerto Rican and Latino Studies; and Joseph Entin is a professor of English and American Studies at Brooklyn College.]