'There is a Glimmer of Hope': Economists on Coronavirus and Capitalism

One thing seems clear: we are not going back to where we were, to business as usual. Greece's former finance minister Yanis Varoufakis and Irish economist David McWilliams on the hope for a global new deal.

May 14, 2020 Yanis Varoufakis and David McWilliams The Guardian
Printer friendly
'There is a Glimmer of Hope': Economists on Coronavirus and Capitalism Published May 14, 2020 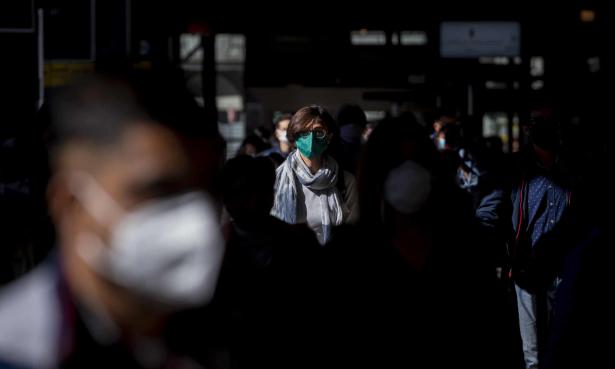 Commuters wearing face masks arrive at Termini station in Rome as Italy returned to work on May 4.. ,Photograph: Antonio Masiello/Getty Images // The Guardian

David McWilliams: I think it is fair to say that capitalism – in the course of this unprecedented crisis – has been suspended. We are not going back to where we were, to business as usual. The state has come back, and this episode will not be forgotten by the electorate. I don’t know where we are going, but one thing seems clear: we are not going back.

Yanis Varoufakis: I like this phrase: capitalism has been suspended. The last time capitalism was suspended in the west was during the second world war, with the advent of the war economy: a command economy that fixed prices. The war economy marked the transcendence of the standard capitalist model.

But what we see now is not so much the suspension of capitalism. The rules of capitalism may have been suspended – all those sacrosanct policies are gone, the neat separation of fiscal and monetary policy is gone, the idea that public debt is a bad thing is gone.

But the institutions that are necessary to build “the war economy without war” so to speak – to suspend and transcend capitalism – those have not been put in place. There is a profound difference between saying: “It’s all going to shit, so we don’t expect you to stick to the rules,” and saying: “The rules themselves have changed, and we must make new ones to prevent an economic collapse.” All this talk of quantitative easing by the European Central Bank suggests that we remain very far from a war economy mindset.

DM: This is a familiar category error in Europe. If you are basing your economic policy on the willingness of people who are too traumatised and sick to borrow – which is the core logic of quantitative easing – then you have a very serious problem. A common image of quantitative easing is the hose: a huge monetary hose, with water gushing out to stop the fire of crisis. But the hose of monetary policy is limited by this little valve called the banks, a little valve called the credit committee, a little valve called the “willingness of business to borrow money”. And ultimately, that hose of money becomes a trickle – and even that trickle stands to benefit the wealthy much more than the poor.

So I take your point that despite the suspension of the rules, the infrastructure remains in place. But people across Europe are now saying: “Hey, there is an alternative.” This second phase will be about how we move ahead in rethinking capitalism, in rethinking finance, rethinking how economies work and for whom – potentially toward a new Bretton Woods-style settlement for the entire global economy.

So that’s where we are: in the first year of the third decade of the 21st century. Looking out at the next decade, armed with history as well as economics, what do you think the global and European economy will look like?

YV: We are sitting on a saddle point, prepared to tip in either direction. It is utterly indeterminate which of the two directions we travel.

Let us start with the positive scenario. It builds from your point about the prospects for a new Bretton Woods – with its particular manifestation in the European Union.

If we are going to have continental consolidation, what should it look like? It would not be a federation, because – even though that is more necessary than ever – it is less likely than ever, because the centrifugal forces of the coronavirus crisis, the migration crisis, and the euro crisis are pulling us apart. But the alternative is to deploy the existing [EU] institutions in a way that can simulate a federated Europe, and we can do this tomorrow, if we so choose: to provide immediate cash to all those who are struggling in poverty, to invest in the green transition.

There is a glimmer of hope here, because there is a profound difference between 2020 and 2010. Back then, when Ireland and Greece went belly up, there were remarkable dissimilarities between what our countries were experiencing and what Germany was experiencing, what Holland was experiencing. Today, Germany’s industrial machine is broken – and was broken long before coronavirus hit. Two main industries – automobiles and machine tooling – were already in serious trouble. So the fact that Germany is now in the same pile of shit as the rest of us offers a glimmer of hope that they might say: what should we do? It’s no longer: “Your problem: here’s the Troika.”

DM: And we will send you the bill as well! So that’s the positive scenario. The interruption of “business as usual” gives way to new policies and new possibilities for Europe and beyond. What’s the other option?

YV: Well, we humans – and we Europeans, in particular – love to miss fantastic opportunities and end up with dystopian outcomes instead. It’s very likely that we will encounter the same recalcitrance by the same set of European ordoliberals, who will keep putting roadblocks in the way of moves toward a genuine, democratic federalism.

YV: Every time there is a crisis in Europe, Italian growth rates fall. Every time there is a problem, Italy sinks deeper into stagnation – with Salvini waiting in the wings. If Frankfurt, Berlin, and Brussels fail again to move toward the positive scenario, Italy – not just Italy, but all of Europe’s most devastated regions – will move again toward the neo-fascist right. In that case, all bets are off.

This is the endpoint of the negative scenario: a giant domino effect, leading to the disintegration of the European Union. Not that the EU will cease to exist. Only that it will become irrelevant, like the Commonwealth of Independent States.

YV: It still exists! It still has an office in Moscow. So the negative scenario is that the European Union will become like the CIS. And that will be music to the ears of the Trumps, Bolsonaros, and Modis of this world. We would move into a transactional, Hobbesian global economy: nasty, brutish, and poor for the majority of people.

My sense is that the period when you could travel, engage, move, we might have reached the end of that open period.

DM: When I was born in Ireland, the country was very poor. And then it became quite wealthy, on the back of the European project, on the back of Europe’s position in the global supply chain, and with a tax policy that attracted lots and lots of capital. My sense is this model might be gone, and this style of globalisation along with it. I fear that the period when you could travel, engage, move – we might have reached the end of that open period. People will say: “This virus came from the cosmopolitan world, from the world of international movement.” Whether it’s right or not, we might begin to blame people. We know that the Black Death resulted in ferocious antisemitism in Europe. People asked: “Who can we blame for this?” And so they blamed the one community that was already in isolation in the ghetto.

This is what terrifies me most, sitting here in the first year of the third decade of the 21st century. What we saw before may come again, and we turn back to Yeats: “Turning and turning in the widening gyre / The falcon cannot hear the falconer; / Things fall apart; the centre cannot hold; / Mere anarchy is loosed upon the world.” I fear now, unless we move quickly and in a new direction, the world that my kids will inherit is going to turn very nasty, indeed. So it’s a clarion call.

YV: The loudest call in a generation. I share all of your concern for the future, although I must challenge the analysis on which it is based. The openness that you describe has always gone hand in hand with severe restriction: Nafta and the US-Mexico border; freedom of movement in Europe and Frontex along the Mediterranean. This is not a contradiction; it is the logic of a system that prizes the movement of capital over the freedom of human beings.

[Yanis Varoufakis is the co-founder of DiEM25 (Democracy in Europe Movement), former finance minister of Greece and author of And the Weak Suffer What They Must? Europe's Crisis and America's Economic Future.

David McWilliams is one of Ireland's leading economists, broadcasters and commentators. He is also the country's best-selling non-fiction author. He is often cited has one of the first economists who didn't buy the hype surrounding the Irish economic boom in the 1990s after predicting that the economy would ultimately decline.]