Sanctions in the Era of Pandemic

From Venezuela to Iran, Washington's illegal and inhumane economic sanctions are putting millions of lives at risk. 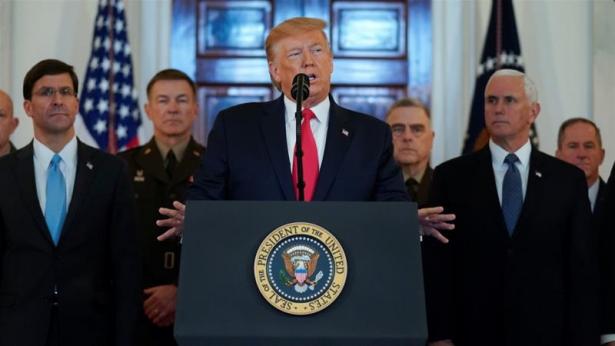 US President Donald Trump is seen as he delivers a statement about Iran in Washington,US on January 8, 2020, Kevin Lamarque/Reuters

Millions of people in the United States have long known what it is like not to be able to buy food, or soap, or toilet paper. Some because they came here from much poorer places, others because they are among the 140 million poor or low-income people living in the country today.

Now, millions more of us are experiencing this scarcity for ourselves due to the COVID-19 crisis, as panic-buying cleans out supermarket shelves, healthcare workers plead for masks and gloves, and hospitals and states are forced to bid against each other for scant supplies of ventilators.

We are learning what it feels like not to be able to get what we need. In the process, maybe we can develop some empathy for others in the world for whom scarcity, much more far-reaching than our own, has long been a common reality - and especially where our own government is responsible for much of their suffering.

Unfortunately, alongside its self-aggrandising and inept handling of the pandemic at home, the Trump administration is escalating policies globally that are designed to make things even harder for those facing the pandemic in countries already devastated by US-imposed economic sanctions.

Like wars, climate change, and economic disruption of all kinds, sanctions do tremendous damage to vulnerable people. The difference is that economic sanctions are designed to make people's lives unbearable. The goal of US sanctions - in Iran, in Venezuela, and beyond - is precisely to destroy the lives of ordinary people, in hopes they will rise up in favour of whatever regime change Washington is looking for.

Long before the COVID-19 pandemic, and long before Washington cancelled its funding of the World Health Organization (WHO), these US sanctions were already violating human rights and international law. The UN Human Rights Council (UNHRC) determined that economic sanctions "can have far-reaching implications for human rights," including "on the right to life, the rights to health and medical care, the right to freedom from hunger, and the right to an adequate standard of living, food, education, work and housing." UNHRC noted, in particular, its alarm at "the disproportionate and indiscriminate human costs of unilateral sanctions and their negative effects on the civilian population, in particular women and children."

Along with violating international law, economic sanctions do not even work for the purpose they are ostensibly imposed. There is no historical example of US economic sanctions persuading a local population to rise up and overthrow their government in response.

Not in Iraq, where 12 years of crippling US-led sanctions led to the deaths of more than 500,000 children in between Washington's two Iraq wars. Not in North Korea, where decades of US sanctions and other pressures helped keep the country isolated and impoverished. Certainly not in Cuba, where decades of blockade have not prevented Cuban medical missions from travelling the world to assist in crisis response work, while providing some of the best healthcare in the hemisphere for its own people.

And yet, despite those years of failure, Washington continues to impose sanctions that destroy the lives of tens of millions - even as the coronavirus wreaks new levels of havoc on the lives of the poorest and most disenfranchised among them.

US sanctions are the key weapon in Trump's "maximum pressure" campaign against Iran. They have been tightened repeatedly.

Those sanctions have been in place for decades. Before the Obama administration signed the Iran nuclear deal in 2015, they had already caused great suffering among ordinary people. In 2012, then-UN Secretary-General Ban Ki-moon reported that "the sanctions imposed on the Islamic Republic of Iran have had significant effects on the general population," including food and medicine shortages.

The nuclear deal led to the lifting of some of those sanctions. But when Trump withdrew from the deal in 2018, they were slapped back on again, along with devastating new sanctions since.

Officially, humanitarian items like medicine are exempted. But in practice, trade restrictions - and banks' fear of retribution if they fulfil any financial transactions with Iranian companies - make those official exemptions a bad joke. That leads to huge price increases for essential goods and severe shortages of crucial medicines. The sanctions also limit oil production and exports, severely reducing access to the levels of foreign currency required to satisfy the population's food and medical needs.

And all of that was before the pandemic erupted.

Now, Iran remains one of the worst hotspots as the disease speeds across the globe. Tens of thousands of Iranians have tested positive for COVID-19, and thousands have already died. Meanwhile, as The New York Times reports, "secondary sanctions on financial institutions and companies that do business with Iran have made it nearly impossible for Iran to buy items like ventilators to treat patients."

Human Rights Watch, dozens of US senators and congress members, and a group of influential former US and international officials have all urged the Trump administration to allow a humanitarian suspension of sanctions. Instead, they are being tightened.

In mid-March, just as the virus was wreaking human havoc across Iran, Washington imposed new sanctions that were certain to worsen the civilian suffering and orchestrated behind the scenes the International Monetary Fund's denial of Iran's desperate five-billion-dollar loan request to strengthen its shattered healthcare system. At the same time, it hypocritically dangled an offer of medical assistance, knowing Tehran would reject such aid from the government responsible for its suffering.

Meanwhile, the US Navy sent two entire aircraft carrier groups - accompanied by a B-52 bomber - to patrol the Gulf. It's an ominous development, with the administration deliberately provoking and seemingly threatening the pandemic-ravaged country not only with economic devastation, but all-out war.

The US has been imposing severe political punishments on Venezuela for years. As Venezuelan sociologist and fellow of the Transnational Institute Edgardo Lander enumerated:

"Successive US administrations have confronted the Bolivarian process in Venezuela from day one, backing the most right wing sectors of the opposition both financially and politically. George W Bush backed the coup d'etat of 2002. Congress enacted the Venezuelan Defense of Human Rights and Civil Society act of 2014 which requires the President to impose sanctions such as blocking assets and visa restrictions on Venezuelan government officials judged to be responsible for violations of human rights. In 2015 Barack Obama issued and later renewed a new Executive Order (EO) declaring a national emergency with respect to 'the unusual and extraordinary threat to the national security and foreign policy of the United States posed by the situation in Venezuela.'

"This executive order further prepared the groundwork for economic sanctions. Sanctions against Venezuela have thus been a bipartisan policy, but it was the Trump administration that started imposing direct financial, trade and economic sanctions against Venezuela, starting in August 2017 with the express purpose of producing regime change. This has significantly contributed to deepening the current economic crisis."

Now, as the Trump administration has accelerated regime change operations against the country - even officially recognising an opposition leader, Juan Guiado, as the country's president - Venezuela's sanctions-driven pain has grown profoundly worse. "Regime change through economic measures likely to lead to the denial of basic human rights, and indeed possibly to starvation, has never been an accepted practice of international relations," warned Idriss Jazairy, the UN special rapporteur responsible for economic sanctions. "Real concerns and serious political differences between governments must never be resolved by precipitating economic and humanitarian disasters."

Things were dire in Venezuela already. Then the coronavirus crisis hit.

In an urgent April 9 op-ed for The Inter-American Dialogue, three politically diverse Venezuelan activists wrote that "like those in Italy, Spain, and New York, Venezuelan hospitals lack adequate testing kits, ventilators, and personal protective equipment for staff. Unlike those hospitals, they also frequently lack electricity, soap, and clean water. Thousands of doctors and nurses are among the millions who have fled the country in recent years, and many citizens who remain cannot afford to isolate at home."

The authors are academics and human rights activists, critical of both the government and the Guaido-led opposition, and one is also a former deputy foreign minister and chief of staff to President Nicolas Maduro. They are part of a larger diverse group urging all political sides in the country to come together to combat the urgent threat of the coronavirus.

The problem they face is the US. The Trump administration, rather than supporting such a move, or at the very least standing aside to allow steps towards a national agreement, has instead indicted Venezuelan President Nicolas Maduro, issued concrete demands for a change of regime in the country, and tightened sanctions further.

The three Venezuelan activists warn this is a disastrous course. "The substantial political will needed to forge an agreement" to unify the country against the COVID-19 threat will be much more difficult to find with the US "standing in the way," they warn. "The recent indictments against Maduro and his aides on 'narco-terrorism' and other charges are a worrying sign that threatens to undermine any emerging momentum toward a humanitarian truce."

And yet, as in Iran, the Trump administration has only escalated the military threat alongside its sanctions, deploying Navy ships off the Venezuelan coast. As The New York Times described it, Washington "is seizing on Venezuela's economic pain and the coronavirus threat" - once again deploying pain as foreign policy amid a global pandemic.

The world we want to live in?

Crises like these raise the most important questions of all.

What world do we want to live in? Do we want a world of increasing arms and fear and hatred of others, or a world mobilising mutual aid against a virus that does not distinguish between any of us?

Fortunately, across the world, people are choosing to build ties of human solidarity. In the US, despite its government, people are joining mutual aid committees, working to support healthcare workers and first responders, and mobilising to demand government support for our most impacted communities.

What all this makes clear, however, is we cannot stop at home. In response to a pandemic of this scale, that work must also take up the demand to end the economic sanctions that our government is imposing on people already facing devastating health, economic, climate and in too many cases political emergencies.

Fellow Phyllis Bennis directs the New Internationalism Project at IPS, focusing on Middle East, U.S. wars and UN issues. She is also a fellow of the Transnational Institute in Amsterdam. In 2001 she helped found and remains active with the U.S. Campaign for Palestinian Rights. She works with many anti-war organizations, writing and speaking widely across the U.S. and around the world as part of the global peace movement. She has served as an informal adviser to several top UN officials on Middle East issues and was twice short-listed to become the UN Special Rapporteur on Human Rights in the Occupied Palestinian Territory.

Phyllis has written and edited eleven books. Among her latest is Understanding ISIS & the New Global War on Terror: A Primer, as well as the just-published 7th updated edition of her popular Understanding the Palestinian-Israeli Conflict. She has also written Before & After: US Foreign Policy and the War on Terror and Challenging Empire: How People, Governments and the UN Defy U.S. Power.