labor The Case For Sectoral Bargaining Is Now Stronger Than Ever

Even if sectoral bargaining would not magically produce perfect unions with perfect solidarity, it would give unions the access they need to build those perfect unions by creating sector-wide labor groups.

May 24, 2020 Hamilton Nolan In These Times
printer friendly 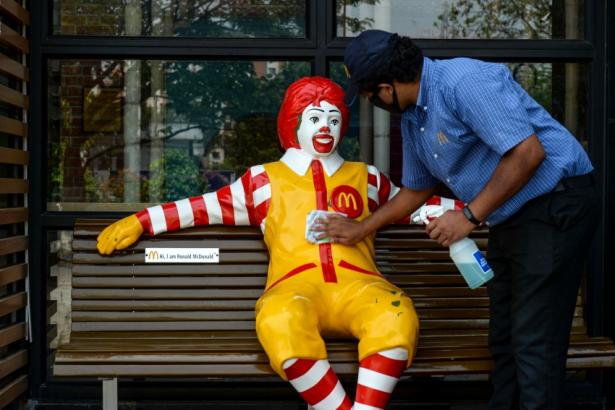 A worker cleans Ronald McDonald, the mascot of fast-food company McDonald's, for the reopening of the outlet after the government eased a nationwide lockdown imposed as a preventive measure against the COVID-19 coronavirus, in Secunderabad, the twin city , (Photo by NOAH SEELAM/AFP via Getty Images)

We are living through the economic equivalent of emergency medicine. Right now, we are focused on leaders trying (often ineptly) to triage the immediate consequences of our economic crisis. Most of us are just thinking about staying employed. But there is deeper trouble on the horizon—the future of wages. We need to talk about how we’re going to prevent the paychecks of workers from getting crushed for years even after the pandemic is over.

Tens of millions of working people are newly unemployed. A large portion of the jobs they left will not come back. Hundreds of thousands of businesses will close as a result of the pandemic and its associated lockdown and the failure of our government to extend a proper lifeline. Ideally, the federal government would get workers and employers to the other side of this in one piece with a competent rescue package, but that is almost certainly not going to happen. Not even the Democrats have proposed measures that would be adequate to prevent a massive, long-lived crisis for working people. So let’s turn the discussion, for a moment, to what must be done to ensure that the aftermath of this does not reinforce all of the most devastating economic trends of the past 40 years: stagnant wages for working people, capture of great wealth by the very richest people, and inequality that, incredibly, keeps getting worse.

Economists say that what’s happening now will severely depress wages in coming years. Unemployment will remain high, along with desperation, and chunks of jobs will simply disappear, and companies will be all too happy to take advantage of that in order to hire at lower wages and resist wage increases for the workers they have. The layoffs that have already happened have disproportionately hit low-income workers—the group with the least ability to fight back against cutthroat employers that want to force them into future positions that will earn them even less. There will be fewer bad jobs, and the bad jobs will be worse, and companies will luxuriate in the large pool of unemployed people in order to lean into a “take it or leave it” attitude for lower pay. They will cut labor costs at the bottom, because they can, and funnel those savings to the bottom line. That will happen, because that is our system. So, if we care about working people, what do we do about that?

The core of the problem is that workers need more bargaining power, to prevent their bosses from pushing their wages down. That power comes from organized labor and collective bargaining. The revival and growth of unions in America is the long-term solution to the big capitalist mechanism that has kept wealth inequality growing for four decades.

But the decline of unions has taken more than a half-century, and their revival by the means at hand—organizing companies one at a time—could take just as long. We need to move faster than that. We need to talk now, louder, and more, about sectoral bargaining: organizing and negotiating contracts for entire industries at once. Lots of people in the labor world have called for sectoral bargaining for years, as a way to dramatically expand the number of workers that can get the benefits of collective bargaining. Creating it in America would mean changing labor law, and sectoral bargaining was in fact advocated in quite a few of the platforms of Democratic presidential candidates. One candidate who has not come out in favor of sectoral bargaining, however, is a guy named “Joe Biden.”

Biden’s labor platform says only that he will create a “working group” that will “further explore the expansion of sectoral bargaining,” which is quite different from saying that his administration would be willing to have the nasty, drag-out political fight that will no doubt be required to get significant labor law improvements in place, over the screaming opposition of the Chamber of Commerce, Wall Street, and the entire Republican Party. Tepid commitment to a hard fight is no commitment at all. Lesser labor reforms that have typically been offered as chum by Democrats to the union world—card check, for example, an extremely modest reform that the Obama administration still failed to pass—are not going to be enough to match the scale of tens of millions of currently non-union workers with an economic anvil on their paychecks next year.

Charlotte Garden, a labor law professor at Seattle University School of Law, says that the case for sectoral bargaining goes beyond pay. It’s also an ideal way to set safety standards across an entire industry—something that, for example, grocery or meat packing workers would surely welcome right now. She points out that sectoral bargaining can also relieve the downward pressure on wages by simply taking wages off the table as a way for companies to cut costs, because they would have industry-wide contracts to adhere to. “It takes labor costs out of competition,” Garden says. “With a lot of companies feeling economic squeeze, the tendency will be to eke out any competitive advantage possible, including cutting back on pay and benefits and shifting risk onto workers—creating a downward economic spiral.”

Sectoral bargaining is not a panacea. A common objection among the more radical strain of labor organizers is that sectoral bargaining would create huge, unwieldy, bureaucratic groups of workers that could hardly be dubbed “unions,” because they would lack the intense grassroots worker-to-worker connection that is built through strong union organizing campaigns. Such groups would be susceptible to becoming disparate groups of far-flung workers who felt little real solidarity with one another, other than sharing an employment contract that was negotiated by some high-level labor bureaucrat that they don’t even know.

This risk is real. But consider the alternative: Trying to organize ten or twenty million new workers company-by-company under the system we have now. It’s unlikely, and it would take decades even if we could pull it off. I would much rather hand millions of new workers over to labor organizers and say, “They’ve been unionized by legal fiat—now go in and organize them into real union members” than to say, “Here are 50 million tenuously employed workers at cutthroat mega-corporations with no safety net and also all of labor law is arrayed against you being able to get a certified union. Good luck.” Even if sectoral bargaining would not magically produce perfect unions with perfect solidarity, it would give unions the access they need to build those perfect unions by creating sector-wide labor groups. And while the grassroots organizing takes place in years to come, all of those workers would be protected from the worst predations of cutthroat capitalists intent on pushing wages as low as they can possibly go without mass starvation.

Rather than tripping over themselves to line up behind Joe Biden, unions might consider asking him to commit to this first.