America must Listen to its Wounds. They Will Tell Us Where to Look for Hope

May 31, 2020 Reverend William Barber The Guardian
Printer friendly
America must Listen to its Wounds. They Will Tell Us Where to Look for Hope Published May 31, 2020 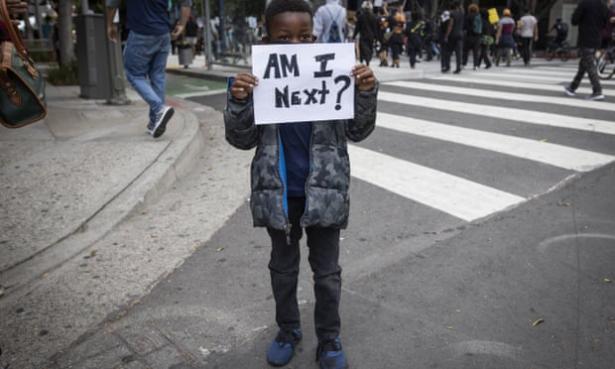 The systemic racism that killed George Floyd has taken untold souls from us for over 400 years.’,Christian Monterrosa/AP

Nproo one wants to see their community burn. But the fires burning in Minneapolis, just like the fire burning in the spirits of so many marginalized Americans today, are a natural response to the trauma black communities have experienced, generation after generation.

No one wants the fires – even activists on the ground have said this. But they have also shared how their non-violent pleas and protests have gone unnoticed for years as the situation has gotten out of hand. No one knows who and what is behind the violence, but we do know that countless activists, grassroots leaders and preachers were screaming non-violently long before now: “Change, America! Change, Minneapolis!” Rather than listen, many of those in power saw even their non-violent protest as an unwelcome development.

This is so often the case because many Americans struggle to imagine that our government’s policies and its long train of abuses demand radical transformation. Too many want to believe racism is merely caused by a few bad actors. We often turn racism into a spectacle, only considering the cruel legacy of racism when an egregious action escalates outrage to this level.

Black Americans have rarely been able to sustain such illusions. Deadly racism is always with us, and not only through police brutality. In the midst of the current pandemic we are painfully aware that our families bear a disproportionate burden of Covid-19 deaths. In some cities where racial data is available, we know that black people are six times as likely to die from the virus as their white counterparts. Even before Covid, large numbers of black Americans died because of the racial disparities in healthcare, which are systemic and not unintentional.

African Americans are three times more likely to die from particulate air pollution than our fellow Americans. The percentage of black children suffering from asthma is nearly double that of white people, and the death rate is 10 times higher. This is but a reflection of the fissures of inequality that run through every institution in our public life, where the black wealth gap, education gap and healthcare gap have persisted despite the civil rights movement, legal desegregation and symbolic affirmative action. We understand that the same mentality that will accept and defend the violence of armed officers against unarmed black people will also send black, brown and poor people into harm’s way during a pandemic in the name of “liberty” and “the economy”.

Many have cited Dr King to remind Americans that a riot is the language of the unheard. But I have been reflecting on the eulogy he offered when another man – a white man who came to Selma, Alabama, to work for voting rights – was brutally murdered by racist violence in 1965. At the funeral for James Reed, Dr King said it is not enough to ask who killed the victim in a case like the murder of George Floyd. Weak and unacceptable charges have been brought against the officer whose knee choked George Floyd, staying on his neck for three minutes after he went unconscious, but no charges have been filed against the other officers who stood by and watched. Even still, dealing with who did the killing is not all that justice demands. Dr King said the question is not only who killed him, but also what killed him?

Those of us who have faced the lethal force of systemic racism have also learned something else in the American story. We can be wounded healers

The systemic racism that killed George Floyd has taken untold souls from us for over 400 years. And it is killing the very possibility of American democracy today. I join those screaming that this is all screwed up, and it’s been screwed up far too long. But we are not screwed as long we have the consciousness and humanity to know what is right and wrong.

Those of us who have faced the lethal force of systemic racism have also learned something else in the American story. We can be wounded healers. We don’t have to be arbitrarily destructive. We can be determined to never accept the destruction of our bodies and dreams by any police, person or policy. We have learned that there is a force more powerful. When hands that once picked cotton have joined together with white hands and Native hands, brown hands and Asian hands, we have been able to fundamentally reconstruct this democracy. Slavery was abolished. Women did gain the right to vote. Labor did win a 40-hour work week and a minimum wage. The civil rights movement in the face of lynching and shooting did expand voting rights to African Americans.

If we take time to listen to this nation’s wounds, they tell us where to look for hope. The hope is in the mourning and the screams, which make us want to rush from this place. There is a sense in which right now we must refuse to be comforted too quickly. Only if these screams and tears and protests shake the very conscience of this nation –and until there is real political and judicial repentance – can we hope for a better society on the other side of this.

William J Barber II is co-chair of the Poor People’s Campaign: A National Call for Moral Revival, which is mobilizing poor people and their allies for a mass assembly and march on Washington in June 2020

Your support helps protect the Guardian’s independence and it means we can keep delivering quality journalism that’s open for everyone around the world. Every contribution, however big or small, is so valuable for our future.