It’s Not Whether You Were Exposed to the Virus. It’s How Much.

The pathogen is proving a familiar adage: The dose makes the poison. 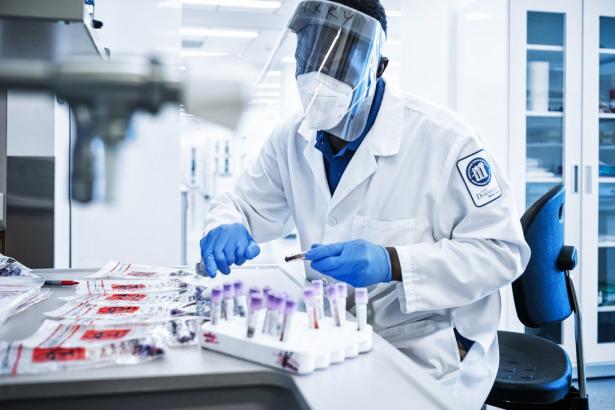 When experts recommend wearing masks, staying at least six feet away from others, washing your hands frequently and avoiding crowded spaces, what they’re really saying is: Try to minimize the amount of virus you encounter.

A few viral particles cannot make you sick — the immune system would vanquish the intruders before they could. But how much virus is needed for an infection to take root? What is the minimum effective dose?

A precise answer is impossible, because it’s difficult to capture the moment of infection. Scientists are studying ferrets, hamsters and mice for clues but, of course, it wouldn’t be ethical for scientists to expose people to different doses of the coronavirus, as they do with milder cold viruses.

“The truth is, we really just don’t know,” said Angela Rasmussen, a virologist at Columbia University in New York. “I don’t think we can make anything better than an educated guess.”

Common respiratory viruses, like influenza and other coronaviruses, should offer some insight. But researchers have found little consistency.

The new coronavirus, SARS-CoV-2, is more similar to the SARS virus and, therefore, the infectious dose may be hundreds of particles, Dr. Rasmussen said.

But the virus has a habit of defying predictions.

Generally, people who harbor high levels of pathogens — whether from influenza, H.I.V. or SARS — tend to have more severe symptoms and are more likely to pass on the pathogens to others.

But in the case of the new coronavirus, people who have no symptoms seem to have viral loads — that is, the amount of virus in their bodies — just as high as those who are seriously ill, according to some studies.

And coronavirus patients are most infectious two to three days before symptoms begin, less so after the illness really hits.

Some people are generous transmitters of the coronavirus; others are stingy. So-called super-spreaders seem to be particularly gifted in transmitting it, although it’s unclear whether that’s because of their biology or their behavior.

On the receiving end, the shape of a person’s nostrils and the amount of nose hair and mucus present — as well as the distribution of certain cellular receptors in the airway that the virus needs to latch on to — can all influence how much virus it takes to become infected.

A higher dose is clearly worse, though, and that may explain why some young health care workers have fallen victim even though the virus usually targets older people.

The crucial dose may also vary depending on whether it’s ingested or inhaled.

People may take in virus by touching a contaminated surface and then putting their hands on their nose or mouth. But “this isn’t thought to be the main way the virus spreads,” according to the Centers for Disease Control and Prevention.

That form of transmission may require millions more copies of the virus to cause an infection, compared to inhalation.

Coughing, sneezing, singing, talking and even heavy breathing can result in the expulsion of thousands of large and small respiratory droplets carrying the virus.

“It’s clear that one doesn’t have to be sick and coughing and sneezing for transmission to occur,” said Dr. Dan Barouch, a viral immunologist at Beth Israel Deaconess Medical Center in Boston.

Larger droplets are heavy and float down quickly — unless there’s a breeze or an air-conditioning blast — and can’t penetrate surgical masks. But droplets less than 5 microns in diameter, called aerosols, can linger in the air for hours.

“They travel further, last longer and have the potential of more spread than the large droplets,” Dr. Barouch said.

Three factors seem to be particularly important for aerosol transmission: proximity to the infected person, air flow and timing.

A windowless public bathroom with high foot traffic is riskier than a bathroom with a window, or a bathroom that’s rarely used. A short outdoor conversation with a masked neighbor is much safer than either of those scenarios.

Recently, Dutch researchers used a special spray nozzle to simulate the expulsion of saliva droplets and then tracked their movement. The scientists found that just cracking open a door or a window can banish aerosols.

“Even the smallest breeze will do something,” said Daniel Bonn, a physicist at the University of Amsterdam who led the study.

Observations from two hospitals in Wuhan, China, published in April in the journal Nature, determined much the same thing: more aerosolized particles were found in unventilated toilet areas than in airier patient rooms or crowded public areas.

This makes intuitive sense, experts said. But they noted that aerosols, because they are smaller than 5 microns, would also contain much less, perhaps millions-fold less, virus than droplets of 500 microns.

“It really takes a lot of these single-digit size droplets to change the risk for you,” said Dr. Joshua Rabinowitz, a quantitative biologist at Princeton University.

Apart from avoiding crowded indoor spaces, the most effective thing people can do is wear masks, all of the experts said. Even if masks don’t fully shield you from droplets loaded with virus, they can cut down the amount you receive, and perhaps bring it below the infectious dose.

“This is not a virus for which hand washing seems like it will be enough,” Dr. Rabinowitz said. “We have to limit crowds, we have to wear masks.”