In this time of heightening crisis, we must be brave enough to use our full imaginations — and listen to those who have been dreaming of and fighting for just cities and communities for years. 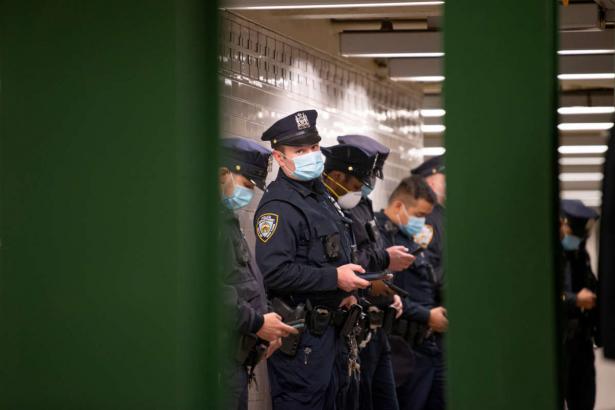 An NYPD officer wearing a mask looks at the camera during a daily briefing in the Union Square subway station amid the coronavirus pandemic on May 6, 2020, in New York City. ,Alexi Rosenfeld/Getty Images

Right now, the “impossible” is happening every day.

In Detroit, with COVID-19 bursting the boundaries of our everyday catastrophes, we are seeing astounding — and overdue — changes in police and courtroom practices. Police are arresting fewer people and courts have scaled back to so-called “essential functions.” This comes after thousands of people in the community have long demanded an end to aggressive police stops, driver’s license suspensions and court debt. Now, courts have stopped issuing warrants for failing to appear and fewer people are being jailed. In some U.S. cities, jail populations are the lowest they’ve been since the 1980s — even the 1940s. Macomb County, near Detroit, just shelved plans for a new $300 million jail, citing the pandemic.

After years of unemployment, foreclosed homes, water shutoffs, shuttered schools, health clinic closures and jail expansion, many in Detroit’s Black majority have no illusions that our current system is doing anything but abandoning them to die. This calculated divestment has been relentless; after the outbreak of COVID-19, we learned that Wayne County officials had shifted $4 million in the 2019-2020 budget away from indigent health care and into new jail construction. And yet, in our neighborhoods, Detroit residents continue to prioritize each other. If we can do that here, despite decades of disinvestment, it’s possible everywhere. This moment has shown us that changes can happen quickly, and that the “impossible” is simply a matter of priorities. It’s about choosing — or being forced to choose — transformative solutions that dial into our collective humanity.

We are facing fundamental choices about who we are as a society. We could choose racist fear and fascist, dystopian policing. We could continue to deem entire communities “criminal” and refill the jails just as swiftly as we’ve begun to empty them. Or we could recognize we cannot return to “business as usual” because even before the pandemic, we had a state of emergency.

We’re at a turning point now. It’s time to learn from people who have been imagining new ways of being in community, and who have begun making monumental shifts.

At the Detroit Justice Center, we’ve asked more than a hundred young people what investments the city and county could make that would help them feel safe, valued and empowered. Not one of them has said we need more police on the streets or more jails. Instead, they said we should build mental health spas, restorative justice mediation centers, and invest in public transit. Pay our teachers, fix our schools, build housing that’s affordable and accessible for people with disabilities. These are not partisan political demands; in reality they are the freedom dreams of young people who understand that broad swaths of people have been living in a state of emergency for decades.

In Detroit and much of the country, people who experience the brunt of systemic and interpersonal violence and the horrors of our jails and prisons have been fighting for renewed visions of safety and community well-being. They reject the idea that some people are only worthy of a jail or prison cell, and they have been leading the way in building more just cities. Their broader solutions encompass worker-owned cooperatives and thriving local farms and food systems, and they also recognize the need to empty jails in order to unlock the resources that we spend on criminalizing and punishing people.

We’ve entered a moment when we could bring the era of building new jails to an end. In the past several years, more research has shown what so many communities have long known: jails produce poverty, job loss, evictions and homelessness, neighborhood instability, violence, trauma, debility and death. Jails make communities less safe and less healthy. Where incarceration rates are high, community social and economic well-being decline. And all of this misery costs us over $1.2 trillion each year (once the impact on other systems like foster care, housing, and the costs to families is taken into account, that’s the total cost of incarceration in this country). Fortunately, organizers have given us ideas for what we could build instead, and models for fighting for budgets that would create more just and equitable communities.

Last year, in a historic vote, the Atlanta City Council moved to shut down the Atlanta City Detention Center and repurpose it as a hub where residents can access health care, housing, quality child care and more. The Center for Equity, Wellness and Freedom is the result of years of organizing and strategizing by formerly incarcerated women and their allies. Women on the Rise and the Racial Justice Action Center, led by Marilynn Winn and Xochitl Bervera, mobilized over 45 organizations to shut the jail under a rallying cry of “Communities Over Cages.” Atlanta officials built the jail in the lead-up to the 1996 Olympics “to hide the homeless from the community,” as Winn puts it, and filled it by ensnaring poor people in a cycle of tickets, warrants and unaffordable cash bail.

Over many years, the Atlanta activists fought to reduce pretrial incarceration, end cash bail, eliminate city ordinances that criminalize poverty, and cut city contracts with Immigrant and Customs Enforcement. And they didn’t stop there. As the jail population shrank from over 1,000 to less than 100, they began to articulate a vision for how the city could reallocate the $32.5 million it was spending each year on the jail to meet communities’ needs. After the city council vote, Atlanta’s Mayor Keisha Lance Bottoms declared, “No longer will Atlanta be in the jail business.” Winn and others did what visionary organizers do so well — they’d made the unimaginable inevitable.

Winn and others did what visionary organizers do so well — they’d made the unimaginable inevitable.

Thankfully, it’s been happening in cities all over the country. In New York City, Philadelphia, Milwaukee, Chicago, St. Louis, Seattle, Baton Rouge, Los Angeles, and elsewhere, people are demanding resources for health care and well-being. And they’re winning. In Philadelphia, organizers with the “Close the Creek” campaign won a fight to shutter the city’s House of Corrections after pretrial reforms drove down Philly’s jail population by a third, from 8,082 to 5,394, in two years (2016-2018). Last summer, San Francisco’s Board of Supervisors voted to close the city’s Juvenile Hall and create rehabilitative noninstitutional support options for young people — after the Young Women’s Freedom Center and other organizers made them do it. This time last year, in Los Angeles County, after more than a decade of building power, the JusticeLA campaign blocked the construction of two new jails — projects totaling over $3.5 billion — and went on to win an unprecedented commitment to public health care. In Colorado, formerly incarcerated people and their allies, led by the Colorado Criminal Justice Reform Coalition, have won millions in community reinvestment for housing, jobs, reentry supports and health care in communities hardest hit by violence and incarceration.

In this time of heightening crisis, we must be brave enough to use our full imaginations — and listen to those who have been dreaming of and fighting for just cities and communities for years. While these community builders and organizers do not have all the answers, they have been asking the right questions. Questions that have very high stakes for all of us, like­­ how can we heal, so that we can create healthy communities? And how, through our heartbreak, can we be more open-hearted people, so that we can create cities that are more just?

This is transformative work that can orient us toward a livable future for us all. If we’re lucky, future generations will thank us for it.

Amanda Alexander is the founding executive director of the Detroit Justice Center, a movement lawyering organization that works alongside communities to create economic opportunities, transform the justice system, and promote equitable and just cities. Amanda is a senior research scholar at the University of Michigan Law School and serves on the board of the Center for Constitutional Rights and the James and Grace Lee Boggs Center to Nurture Community Leadership. Her writing has appeared in The Globe & Mail, Detroit Free Press, Michigan Journal of Race & Law, Harvard Journal of African-American Public Policy, and other publications. Follow her on Twitter: @A_S_Alexander.

The Trump administration is trying to gaslight the United States to cover up their deadly COVID-19 response. As they silence officials, lie about the numbers and blame the media (and Obama and China and Governors) the country needs trustworthy journalism to help it see through the obfuscation.

But this is an especially difficult time for media organizations and donations to Truthout are down.

Can we count on you to make a small donation so we can continue to produce the strong, no-holds-barred, work that is so crucial right now?