Campaign Zero has a concrete, data-backed proposal for changing how police departments use force. 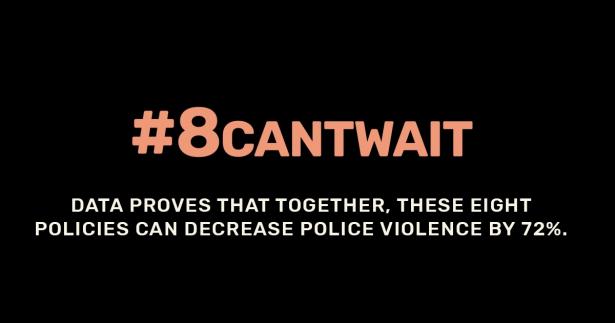 Civil rights activist DeRay Mckesson is relieved that, after the murder of George Floyd and a new wave of protests against police brutality, there’s renewed momentum behind the idea of reducing funding for police departments. But Mckesson says that goal, as laudable as it is, can’t be the only focus of police reform. “Police are still going to be here tomorrow,” he points out. Hence #8Can’tWait, a set of proposals aimed at reducing the use of force by police unveiled by Mckesson and the team at Campaign Zero on Wednesday.

Campaign Zero was formed in 2015 by a group of activists and researchers with the goal of collecting and publicizing police department data and practices in order to understand how to significantly reduce police violence. The research that led to 8 Can’t Wait also began in 2015 with what soon became the Police Use of Force Project—a numbers-driven, reader-friendly examination of the violent tactics that police departments in America’s 100 largest cities employ. The idea is that, if police departments adopt eight reforms of when and how they use force, the ensuing data shows a significant drop in killings—as much as 72% if all eight are followed. The policies are as follows:

When Campaign Zero began its research, cops were not very willing to disclose what they are or are not allowed to do to citizens. Mckesson’s hope is that at this moment when national attention is once again focused on police violence, normally skittish and unresponsive local governments might be compelled to take action. When you plug in your city on the 8 Can’t Wait website, you’ll see how the local police department is handling the eight reforms, and you’re given the contact information of your mayor or sheriff.

In an interview with GQ, Mckesson expanded on what the 8 Can’t Wait data reveals, the separate discussion of shifting resources away from cops, and what he thinks of this round of protests.

GQ: What went into the process of collecting all this use-of-force data?

DeRay Mckesson: Police use-of-force documents are actually not public in many places. It took us a year to get them, either by FOIAing them, or fighting the department, or finding a lawyer who sued the department.

Here’s the thing: At the minimum, the rules by which officers can kill you should be public. You as a citizen deserve to at least know the rules, right? That was the philosophy by which we went about this at the beginning. We actually had no clue what we’d found, we just thought there might be something there. What we found surprised us.

It seems that police departments by and large aren’t following the use-of-force policies you recommend.
Exactly. And these are so simple. We don’t think there needs to be a whole lot of discussion about banning choke holds and strangleholds. We don’t think it’s a big ask to say, “We’re not going to shoot into moving vehicles.” These asks are simple, but not small. The impact is large.

The hard part is this analysis and data is new and the first of its kind. And the police say, “If you restrict our ability to use these types of force, you make us less safe.” That actually isn’t true. In cities where there are more restrictive force policies, the police are actually safer, and communities are actually safer. The police will also say things about crime being rampant if they can’t use force. That’s not true either.

Out of the eight policies listed, are there one or two that you’ve found police departments especially obstinate about changing?

The police never have an argument against any of the policies, because they’d sound absurd. There’s not really a good argument for why you wouldn’t ban chokeholds. They say it’s all symbolic, and police use their best judgment, and we should trust them. That’s only an argument against the theory of use of force.When you originally proposed a use-of-force template a few years ago, what happened?

Since we’ve launched, many cities have changed their policies in some way. Some have changed one or two policies, some have changed more. There are only two cities in the top 100 that have satisfied all eight policies—Tucson and San Francisco—and San Francisco only has all eight because the federal government forced them to. One of the reasons there hasn’t been more movement is that, again, there hasn’t been data like this before, and also, there are a lot of supporters of police reform who feel like they’re not smart enough to understand policy—that policy is in this special realm that only people with PhDs can understand. That’s not true, and we want to normalize and demystify these policies. All of these policies are simple and clear enough for anyone to be an expert on.

Do you think the current protests might allow for more pressure and movement on enacting these policies?
Absolutely. There’s never been a push like this. We’re hopeful, we’re excited. I think people are hungry for action, hungry for something that’ll have an impact, and it’s clear these will have an impact and make communities safer. What’s powerful about these policies is the mayor or police chief have almost unilateral power to just enact them. They rarely require a vote or hearing. In most of the 100 largest cities, the mayor could just come out tomorrow and say, “We ban chokeholds.” Most of the other interventions we want—police union contracts, shifting resources away from police departments—the mechanism by which you do it is a little more complicated.

Have you found these nationwide protests different in any significant ways than protests of previous years?
I think it’s the same spirit of the protests of 2014. I think it’s an acknowledgement that the police have continued to kill people. I think people were promised change in 2014 and it didn’t come.

How do the policy proposals you’ve mentioned work in coordination with, or relate to, a larger goal of defunding police departments?

I want to push back on that a little bit. All of these are large. The language of “large” is sort of odd to me. There are two pockets to this: Reduce the power of the police, and then shift the resources, or shift the role. Most of the defund work is about shifting the role, which is incredibly important, but police are still going to be here tomorrow. Shrink the role work is gradual work. Even the most aggressive proposals don’t take away any money from the police that they currently have; they normally prevent the police from getting more money.

This interview has been edited and condensed for clarity.