Genes May Leave Some People More Vulnerable to Severe Covid-19

Geneticists have turned up intriguing links between DNA and the disease. Patients with Type A blood, for example, seem to be at greater risk. 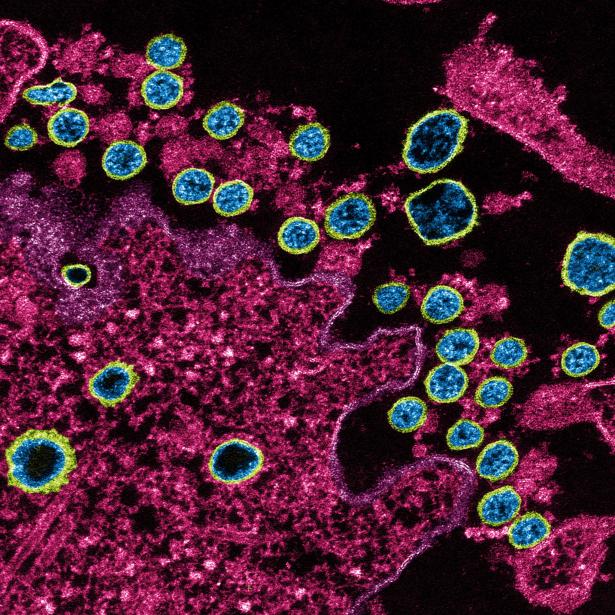 A transmission electron microscope image of a U.S. case of coronavirus., CDC, via Science Source

Why do some people infected with the coronavirus suffer only mild symptoms, while others become deathly ill?

Geneticists have been scouring our DNA for clues. Now, a study by European scientists is the first to document a strong statistical link between genetic variations and Covid-19, the illness caused by the coronavirus.

Variations at two spots in the human genome are associated with an increased risk of respiratory failure in patients with Covid-19, the researchers found. One of these spots includes the gene that determines blood types.

Having Type A blood was linked to a 50 percent increase in the likelihood that a patient would need to get oxygen or to go on a ventilator, according to the new study.

The study was equally striking for the genes that failed to turn up. The coronavirus attaches to a protein called ACE2 on the surface of human cells in order to enter them, for example. But genetic variants in ACE2 did not appear to make a difference in the risk of severe Covid-19.

The findings suggest that relatively unexplored factors may be playing a large role who develops life-threatening Covid-19. “There are new kids on the block now,” said Andre Franke, a molecular geneticist at the University of Kiel in Germany and a co-author of the new study, which is currently going through peer review.

Scientists have already determined that factors like age and underlying disease put people at extra risk of developing a severe case of Covid-19. But geneticists are hoping that a DNA test might help identify patients who will need aggressive treatment.

Figuring out the reason that certain genes may raise the odds of severe disease could also lead to new targets for drug designers.

As the pandemic gained momentum in February, Dr. Franke and his colleagues set up a collaboration with doctors in Spain and Italy who were struggling with a rising wave of Covid-19.

The doctors took blood samples from 1,610 patients who needed an oxygen supply or had to go on a ventilator. Dr. Franke and his colleagues extracted DNA from the samples and scanned it using a rapid technique called genotyping.

The researchers did not sequence all three billion genetic letters in the genome of each patient. Instead, they looked at nine million letters. Then the researchers carried out the same genetic survey on 2,205 blood donors with no evidence of Covid-19.

The scientists were looking for spots in the genome, called loci, where an unusually high number of the severely ill patients shared the same variants, compared with those who were not ill.

Two loci turned up. In one of these sites is the gene that determines our blood type. That gene directs production of a protein that places molecules on the surface of blood cells.

It’s not the first time Type A blood has turned up as a possible risk. Chinese scientists who examined patient blood types also found that those with Type A were more likely to develop a serious case of Covid-19.

No one knows why. While Dr. Franke was comforted by the support from the Chinese study, he could only speculate how blood types might affect the disease. “That is haunting me, quite honestly,” he said.

He also noted that the locus where the blood-type gene is situated also contains a stretch of DNA that acts as an on-off switch for a gene producing a protein that triggers strong immune responses.

The coronavirus triggers an overreaction of the immune system in some people, leading to massive inflammation and lung damage — the so-called cytokine storm. It is theoretically possible that genetic variations influence that response.

A second locus, on Chromosome 3, shows an even stronger link to Covid-19, Dr. Franke and his colleagues found. But that spot is home to six genes, and it is not yet possible to say which of them influences the course of Covid-19.

One of those gene candidates encodes a protein known to interact with ACE2, the cellular receptor needed by the coronavirus to enter host cells. But another gene nearby encodes a potent immune-signaling molecule. It is possible that this immune gene also triggers an overreaction that leads to respiratory failure.

Dr. Franke and his colleagues are part of an international effort called the Covid-19 Host Genetics Initiative.

A thousand researchers in 46 countries are collecting DNA samples from people with the disease. They are now beginning to post data on the initiative’s website.

Andrea Ganna, a genetic epidemiologist at the University of Helsinki, said that initiative’s collected data were beginning to point to a single spot on Chromosome 3 as a potentially important player.

It’s not common for genetic variants to emerge out of studies of so few people, said Jonathan Sebat, a geneticist at the University of California, San Diego, who was not involved in the new study.

“We were all hoping optimistically this was one of those situations,” Dr. Sebat said.

Previous attempts to find any genetic loci that varied significantly between sick people and healthy ones have failed. Dr. Sebat speculated that the new study succeeded because the researchers focused only on people who had respiratory failure and were clearly vulnerable to serious forms of Covid-19.

“They had the ideal cohort,” he said.

New studies, such as the one Dr. Sebat is running in California, will allow scientists to see if the two loci really do matter as much as they seem to now.

The geneticists may be able to zero in on exactly which gene in each locus affects the disease, he said. And researchers will most likely find many other genes with subtler influences on the course of Covid-19.

Zimmer is the author of thirteen books about science. His latest is She Has Her Mother’s Laugh: The Power, Perversions, and Potential of Heredity.

Zimmer started his journalism career at Discover, where he went on to serve for five years as a senior editor. In addition to his work for the New York Times, he has written for magazines including National Geographic, Wired, and The Atlantic. In 2003, Zimmer also launched “The Loom,” an award-winning blog which has been hosted by Discover and National Geographic. In 2015, Zimmer became a contributing national correspondent for STAT, a publication about health and medicine, where he hosted “Science Happens,” a video series that was a finalist for a National Magazine Award. In 2019, Zimmer created “What Is Life?” –an eight-episode series of live conversations with leading thinkers about why life exists, how it began, and other big questions about existence. He is now working on a book on the subject, to be published in 2021.

Zimmer is also the author of two widely praised textbooks. The Tangled Bank: An Introduction to Evolution was the first textbook about evolution ever published intended for non-majors. Choice named it an academic title of the year. Zimmer also co-authored Evolution: Making Sense of Life a textbook for biology majors, with University Montana biologist Doug Emlen. The third edition of the book was published in 2019.