Police Use Tear Gas Banned From War On Protesters At Home

Despite the numerous international agreements barring the use of tear gas in war, number of restrictions on its use for domestic crowd control: 0. 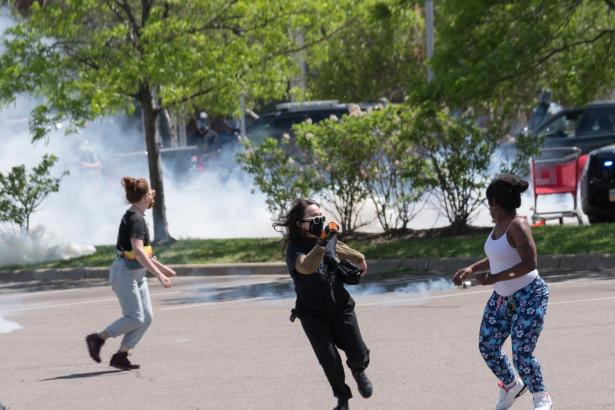 People protesting the Minneapolis police killing of George Floyd in nearby St. Paul, Minnesota, ran from tear gas deployed by police. The tear gas canisters used by the St. Paul police appear to be manufactured by a Florida-based weapons dealer , Lorie Shaull via Flickr

Number of cities nationwide and across the South where law enforcement used tear gas on people protesting last week's police killing of George Floyd in Minneapolis, often without warning or apparent provocation: numerous

Year in which the Hague Treaty prohibited the launching of projectiles containing asphyxiating or poisonous gases including tear gas — a ban ignored by World War I combatants: 1899

Year in which the international community including the United States, in response to the horrors of World War I's large-scale chemical warfare, signed the Geneva Protocol banning from use in war any asphyxiating, poisonous, or other gases: 1925

Year in which President Gerald Ford ratified the Protocol and ended a U.S. policy that interpreted tear gas as among the chemical weapons excluded from the ban: 1975

Year in which the U.S. signed the Chemical Weapons Convention, which also prohibits the use of tear gas in war: 1993

Despite the numerous international agreements barring the use of tear gas in war, number of restrictions on its use for domestic crowd control: 0

Rank of CS tear gas — 2-chlorobenzalmalononitrile, a cyanocarbon — among the most commonly available chemical weapons used by police: 1

Estimated annual revenue of Safariland, the Jacksonville, Florida-based police and military gear company that through its Defense Technology subsidiary manufactured the CS tear gas weapons used against protesters in Minneapolis and a number of other cities in recent days: $500 million

Year in which Safariland owner Warren Kanders resigned from the board of the Whitney Museum of American Art after months of protests over the use of his company's tear gas against asylum seekers at the U.S.-Mexico border as well as Americans protesting against the Dakota Access Pipeline and the 2015 police killing of Michael Brown in Ferguson, Missouri: 2019

Estimated personal worth of Kanders, a former investment banker: $700 million

Amount Safariland has spent so far this year on lobbying at the federal level, according to the Center for Responsive Politics: $20,000

Besides the U.S., number of other countries where Safariland products banned in war are used against domestic protesters: at least 9*

Of those nine countries, number where people are known to have died due to the use of tear gas, either because the gas was used in a confined space or because they were directly struck by the canister: 3**

Year in which the first systematic review of medical literature examining the effects of CS was published, documenting potential long-term and life-threatening health effects that the authors say need more study: 2015

Number of the CS studies reviewed that looked at the use of the gas, which causes violent coughing, during a viral pandemic affecting the respiratory system: 0

Year in which a group of doctors in Hong Kong, where pro-democracy protests were met with heavy and prolonged use of tear gas, surveyed about 170 reporters covering the uprising and found that most had difficulty breathing, persistent coughing or coughed up blood, skin allergies, and gastrointestinal symptoms such as diarrhea or vomiting believed to be related to their exposure: 2019