Establishment pundits love to cite Martin Luther King as a way to delegitimize militant protests and shame unruly protesters. But to him nonviolent action could coerce ruling elites into conceding to demands for justice. 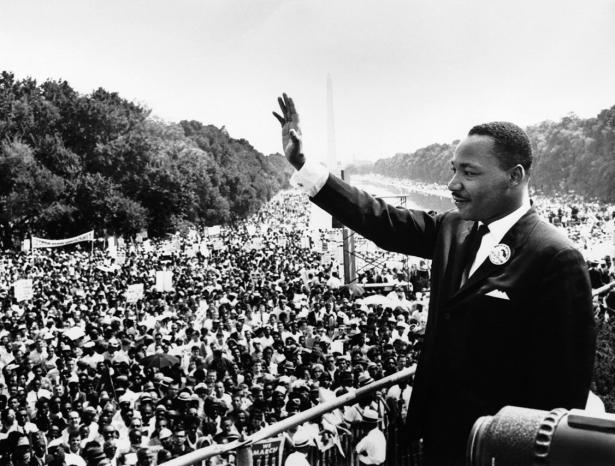 Martin Luther King Jr addresses a crowd from the steps of the Lincoln Memorial during the August 28, 1963, march on Washington, DC.,

Political repression in the United States is at once spectacular and banal. We’ve seen both in recent weeks, as militarized police forces conduct counterinsurgency campaigns against US civilians and brutality is paired with calls for protesters to remain peaceful.

When ruling elites call for peace, they are demanding docility. When they cynically cite decontextualized Martin Luther King Jr quotes and invoke the rights of “peaceful protesters” while denouncing actually existing protests, they announce that no effective protest will ever be peaceful enough to meet their approval. Ruling elites, pundits, and police use the rhetoric of nonviolence to discipline protesters and shift responsibility for state violence onto its victims.

We shouldn’t fall into their trap. There’s nothing peaceful about nonviolence if you’re doing it right.

Nonviolence is not about playing by the rules, working within existing institutions, or keeping protests unthreatening. Nonviolent direct action is direct action. It’s not saintly self-sacrifice or high-minded moralizing but a theory of power and a repertoire of tactics for using it. Effective nonviolence is about wielding collective action to disrupt the normal workings of society.

Martin Luther King Jr knew this better than most. While the pundits are right that King regularly rejected rioting as a tactic, he defended rioters themselves as expressing justified anger against a racist, capitalist order that had left inner-city black residents brutalized, exploited, and abandoned. To him, rioting was anger burning hot; the kind of radical reconstruction of American society he envisioned required it to burn long.

It’s true that King thought nonviolent direct action, militantly pursued, was morally superior to rioting — but more important, he thought it represented a more promising path to directly confronting the American state. Nonviolence, as he came to conceptualize it by the end of his life, was a means of channeling popular rage into a fighting force that could pose a more direct threat to the Johnson administration.

To articulate this vision of “mass civil disobedience,” King looked to the labor movement. In his 1966 president’s report to the Southern Christian Leadership Conference, King cited the strike by thirty-five thousand airline workers that summer as an example of nonviolent power in action. Bosses and politicians, he insisted, had to be coerced into concessions. Airline workers leveraged this kind of coercion through coordinated and disciplined non-cooperation, winning the first multi-carrier contract.

King’s report embraced United Automobile Workers (UAW) president Walter Reuther’s definition of power as “the ability to make the largest corporation in the world, General Motors, say yes when they want to say no.” Workers force managers to do what they don’t want to do by interfering with their ability to profit. It is labor that keeps the machines running, and when workers refuse to work, the machines don’t run. Strikes wield power over employers by disrupting employers’ power at its source.

Mass civil disobedience, as King came to envision it in the Poor People’s Campaign, was a similar program of nonviolent coercion, forcing the federal government’s hand in pursuit of a radical transformation of American society.

The ongoing wave of protests is a testament to the fragility of state power when people collectively withhold their cooperation. President Donald Trump’s calls to “dominate” the protests have proven futile, as intensifying repression further delegitimizes the current system. The police riots have made the protests spread like wildfire. Even property destruction and looting haven’t stoked a backlash. Quite the opposite: polls register wide support for the Black Lives Matter movement’s goals.

The pandemic has clearly created the opening for this nonviolent insurgency. The attack on public health, the abandonment of poor people and people of color, and massive unemployment have thrown the pathologies of the US political system into stark relief. Millions of jobs lost and furloughed are keeping protesters on the street, and the shutdown’s prior disruption has likely lowered the cost of constant agitation. This confluence of factors has made it possible to forge collective rage into multiracial solidarity for truly massive civil disobedience.

Elites are desperate to delegitimize this anger, again by invoking King and the myths of nonviolence. Civil, pacified protests are what they want. But while King relied on a Christian language of love to translate Gandhian satyagraha into the political vernacular of the black social gospel tradition, he never doubted that anger could become a creative force. There is solidarity to be found in recognizing anger, and power in using it to sustain collective resistance in the face of violence. What he cautioned against was anger that clouded judgment and descended into the kind of reactive lashing out that the state thrives on.

Holding anger without violence, then, isn’t about speaking in a civil tone; it means using anger to energize collective resistance without being consumed by it. As Barbara Deming has argued, nonviolence is not a fantasy of spiritual purity; it is a means of angrily fighting back against violence with poise.

Reflecting on the lessons of the airlines strikes, Martin Luther King remarked: “Influence and moral suasion may continue to prepare the climate for change, but there must be present an actual power for change if we are to achieve our purpose.” The challenge posed by King’s vision of mass civil disobedience is how to convert outrage and anger into power. Facing up to this challenge today shouldn’t be an occasion for liberal moralizing or lecturing activists; it is a provocation to acknowledge what peace really demands.

The peace that nonviolent struggle aims for isn’t found by accommodating ourselves to the status quo, playing by the rules, or abiding by the norms of liberal propriety. Peace can only be won in struggle against “the triple evils” of capitalism, racism, and militarism at the foundation of the rule of violence.

Alexander Livingston is an associate professor in the department of government at Cornell University and the author of Damn Great Empires! William James and the Politics of Pragmatism.