labor The Central Issue Is Police Repression, Not Police Unions

Before rushing to expel police unions, labor needs a larger reckoning with law enforcement’s role in a capitalist-colonialist state. 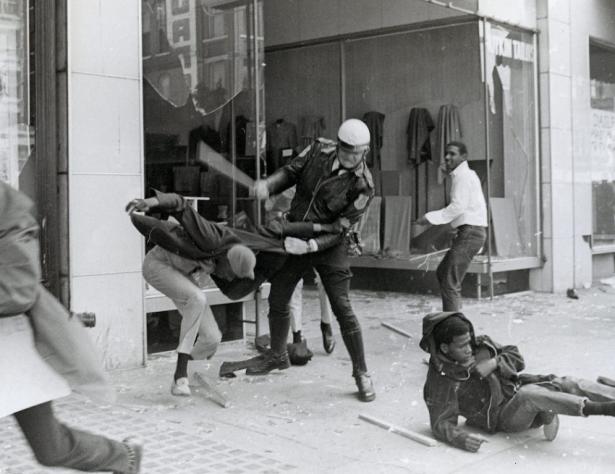 Memphis 1968. Officer Leslie Dean Jones then shot and killed 16-year-old Larry Payne, right, in white shirt, with a sawed-off shotgun to the stomach. Witnesses said Payne had his hands up. A grand jury declined to prosecute. , Memphis Press-Scimitar file photo

The rebellions over the police murder of George Floyd have renewed a longtime controversy regarding police unions. Several unions, such as the Writers Guild of America, East, are now calling for the AFL-CIO to expel the International Union of Police Associations, arguing that police unions have no place in the labor federation.

I am going to suggest that the discussion has gone down a rabbithole and we need to rethink the entire way that the problem has been formulated.

The focus on police unions misses several important issues. One, there are many law enforcement unions within the labor movement: representing local and state police; ICE; Border Patrol; and prison guards. The discussion of police unions has largely focused on those representing city and county police. But the killing of Black men by those police forces is only one aspect of racist violence by law enforcement. The caging of Latino/a immigrant children; the intimidation of Muslim communities; the disproportionate violence carried out against Native Americans by various institutions, are all representative of the nature of law enforcement in a capitalist society rooted in racial settler colonialism.

U.S. law enforcement has its origins in slave patrols and colonial militias, quasi-military outfits that were, respectively, aimed at suppressing slaves and eliminating Native Americans. These organizations were armed and given a wide berth of authority, including killing and imprisoning with impunity. Such institutions morphed into various organizations, including police departments and, yes, the National Guard. Police departments in the North also grew out of armed strikebreaking forces employed by Northern cities to control the immigrant working-class.

Yes, law enforcement unions frequently add to the problem with the lobbying and political pressure that they place on elected officials. They hold collective bargaining agreements over the heads of governments as a means of restricting the disciplining of police for abusive behavior. But even if the police unions and their collective bargaining agreements were ended, there is no reason to believe that this situation would be upended. Police would just find ways other ways to wield political power, and elected officials would find other excuses to hide behind. When officials claim that there is little that they can do about police contracts, that is nothing but sophistry: Police departments can be reorganized. The government may have to negotiate “impact,” but it has the power to radically restructure.

The truth is that police serve a function as an arm of the repressive apparatus of the capitalist-colonialist state. Their role is not to bring peace to our communities but, first and foremost, to uphold the interests of “property” and wealth. Thus, we see the deployment of police against striking workers and to actively suppress protests. As an institution—and I am here not addressing each individual—they are engaged in upholding the larger established order of settler capitalism, including a racial differential between the so-called white and those who have been Other-ized. The police operate based on the presumption of guilt on the part of suspects of color, particularly African Americans, Latino/as and Native Americans. They also operate upon a notion expressed very clearly by President Trump in his farcical walk to the church to hold the Bible upside down: that a massive display of force and the subordination of potential opposition is the only way to quell turmoil.

The problem of police repression has been compounded for decades by the active militarization of the police. Framing their work as “wars against crime” or “wars against drugs” leads to a mindset that is quite different than a “campaign against crime,” for instance. It assumes that there is an identifiable enemy that must be captured and/or destroyed. This militarization escalated in the early 2000s when the federal government began supplying the police with surplus military equipment. Now the police not only had their repressive credentials reinforced, but they were equipped for a war.

Given the weight of this history and the ongoing role of the police in repressing working-class people, especially people of color, the bigger question is: What should the role of law enforcement be in a truly democratic society? This issue is largely being missed in the rush to eliminate police unions. And here progressives need to be careful.

First, all workers should have a right to unionize. There is already a move afoot by forces on the Right to reshape the larger discussion and to obscure the issues of racism and repression, and instead argue that the central problem with police abuse flows from the existence of public sector unions. Rightwing think tank the Manhattan Institute has already begun churning out op-eds on the subject, such as a June 8 piece arguing that “the problems posed by police unions in particular are similar to those with public-sector unions in general.” Any moves to eliminate police unions will certainly be followed by calls to eliminate other public sector unions, including firefighters, postal workers and teachers.

Third, a parting of the ways between the labor movement and police unions should be the result of the labor movement taking a hard look at how law enforcement operates in the United States and then answering the question of “What should the role of law enforcement be in a truly democratic society?” Policing itself needs to be fundamentally reconsidered and restructured.

Expelling unions in the absence of such a larger examination will turn the police unions into victims of “political correctness”—at least, that is the way that they will describe it.  But if, at the end of the day, labor recognizes that U.S. law enforcement agencies today are part of the repressive arm of the state, in direct contradiction to virtually everything that organized labor is supposed to believe and practice, a parting of the ways becomes an obvious necessity.

The question cannot be resolved through administrative decisions. Many unions, such as AFSCME, SEIU, AFGE, Teamsters, and UFCW, have law enforcement components in their ranks. Suggesting that these unions leave the AFL-CIO or that their law enforcement components leave due to their racist behavior, including but not limited to killings, ignores the reality that the U.S. trade union movement has been inconsistent when it has come to racial justice. Law enforcement unions are among the most conservative and racist elements, but not the only ones.

Let us not move to easy answers that dodge the more difficult questions.

Bill Fletcher, Jr. is a talk show host, writer, activist, and trade unionist. He is the executive editor of The Global African Worker, a co-author (with Fernando Gapasin) of Solitary Divided, and the author of "They're Bankrupting Us"–Twenty Other Myths about Unions. You can follow him on Twitter, Facebook and at www.billfletcherjr.com.