As protests against police brutality grow, calls to abolish the police have become increasingly popular. While those demands have been shocking to many, they're not new. Calls for police abolitionism date to the earliest establishment of the police.

June 18, 2020 Talya Zax Forward
Printer friendly
Abolishing the Police is a Radical Idea - That's Been Around for Over a Century Published June 18, 2020 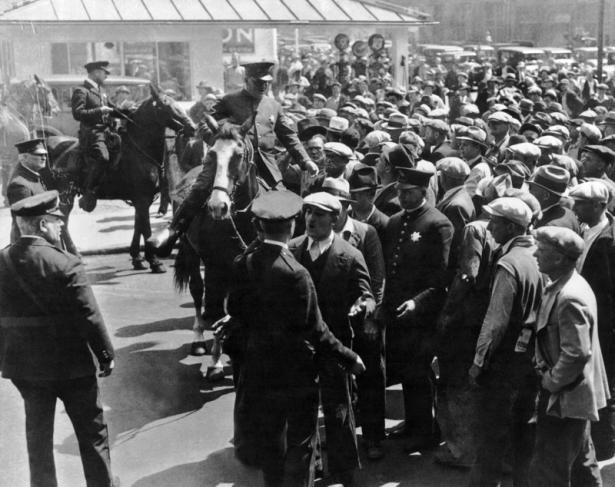 In 1905, Pennsylvania did something unprecedented: It founded America’s first state police force.

The new institution, which was more highly militarized than previous law enforcement systems, was created for one reason: The state government wanted a more organized and efficient way to break strikes. The new force approached that mission with zeal — and violence. In 1909, members of the Pennsylvania State Police killed several strikers during the Pressed Steel Car Strike, a strike by workers who built railroad cars; after a crowd broke one state trooper’s leg, police were given orders to shoot to kill. A report by the New York World recorded similar orders that were given during the Philadelphia Car Strike, a transit strike that turned into a general citywide strike the following year. “The police response was not an effort to terrify but an attempt to kill,” the World reported.

Today, as protests against police brutality in the United States gain momentum, calls to abolish the police have become increasingly popular. But while those demands have been shocking to many, they’re far from new. The sentiments behind police abolitionism date to the earliest establishment of the police as a government institution, and were deeply rooted in late-19th and early-20th century organized labor, the force the police were created to rein in. It’s a forgotten part of American history, but as the relationship between the police force and civilians reaches a point of new tension, it’s increasingly essential to remember.

“The origins of modern policing are rooted in an era of pretty intense labor conflict,” said William P. Jones, a historian at the University of Minnesota. (A disclosure: As the chair of the Forward’s unit of the NewsGuild of New York, I’m a member of the organized labor movement.) While the origins of the police can be traced back for centuries — in America, the police have roots in patrols intended to catch escaping slaves — the first official police forces arose in the mid-1800s, as the norms of life for the working class dramatically shifted.

“You start having these large masses of people who aren’t under the direct authority of a particular person, the way serfs were, or slaves were,” said Alex Gourevitch, a professor of political science at Brown University. Eventually, the newly independent workers began striking for better working conditions. As the strikes became larger, employers became concerned that the private security they hired — frequently referred to as coal and iron police — was insufficiently equipped to protect the employers’ interests. “They start realizing they need to pay taxes for a well-armed police that has the legal authority and the weapons to suppress these strikes,” Gourevitch said.

“In the late 19th century, labor conflict was, in the view of many, the most pressing threat to the social order, to the status quo,” said Jones. “That was the impetus for the development of state police forces and city police forces.” The perceived threats posed by the newly-created independent working class didn’t just have to do with employers’ sense that they were losing control; they were closely tied to xenophobia. “Labor conflict itself was deeply wrapped up in debates over immigration,” Jones said. Anti-labor rhetoric “was often very clearly tied in the mainstream press to the idea that German and Italian immigrants were bringing radical ideas into the country and represented a threat not just as workers, but as foreigners.”

That fear of the foreign was manifested in the composition of the new police forces. When the New York State Police, the country’s second state police force, was created in 1917, its first commissioner, George F. Chandler, hand-selected its members based in part on how well they fit the image of “physically perfect,” “distinctively American type of men” — meaning, in large part, “Anglo-Saxon.”

So the battle lines were drawn: On one hand, the police, created to quash worker rebellions and enforce a status quo that privileged the wealthy and assimilated; on the other, the nationally and ethnically diverse workers, newly aware of their growing power as a group and focused on obtaining further rights and liberties.

“Workers often brought weapons to the picket line, both to stop replacement workers from taking their jobs, and to fight back against the police,” Gourevitch said. “One of the interesting historical parallels between now and that is that most strikes began non-violently, and then the police would show up and start attacking them, and they sometimes would become quite violent affairs.”

This pattern seeded deep opposition to the police in the organized labor movement: “That’s why you start seeing movement to curtail or constrain the police and, amongst certain left-wing groups, change the state itself,” Gourevitch said.

Surprisingly, that movement briefly found sympathetic ears in the American government. Beginning in 1912, the congressional Commission on Industrial Relations examined working conditions throughout the U.S. Its final report, issued in 1915, not only endorsed the finding that the violence surrounding strikes was most frequently a factor of a disproportionate response by law enforcement, but expressed some affinity for the growing belief among workers that the police force was a fundamentally unjust institution.

“Violence is seldom, if ever, spontaneous, but arises from a conviction that fundamental rights are denied and that peaceful methods of adjustment cannot be used,” the report noted in a section titled “The Policing of Industry.” “The sole exception seems to arise in the situation where, intoxicated with power, the stronger party to the dispute relies upon force to suppress the weaker.”

“Violence and disorder during actual outbreaks usually result from oppressive conditions… Throughout history where a people or a group have been arbitrarily denied rights which they conceived to be theirs, reaction has been inevitable,” it added. “Violence is a natural form of protest against injustice.”

Over the next two decades, the Commission’s findings would help lead to a positive shift in the relationship between the working classes and the federal government. It laid the groundwork for much of the pro-labor legislation passed in the 1930s, a change that eventually led to a significant — although far from complete — de-escalation in the conflict between organized labor and the police. But it didn’t change the growing American investment in the police, a force that would dramatically expand throughout the 20th century.

Watching contemporary protests unfold across the United States, the resonance between the current moment and the early years of the conflict between the police and organized labor is clear. “Violence can only be prevented by removing the causes of violence; industrial peace can rely only upon industrial justice,” the Commission on Industrial Relations wrote. Today, calls to disband the police are more organized than in the past; the language has changed, as have the parties leading the charge. But the rallying cry against the police is the same: “No justice, no peace.”