Make It Last; Make It Grow!

We need to come away from the current upheavals with organization, with vision and goals, with program and campaigns that all persist and mature and strengthen rather than folding back into business as usual. 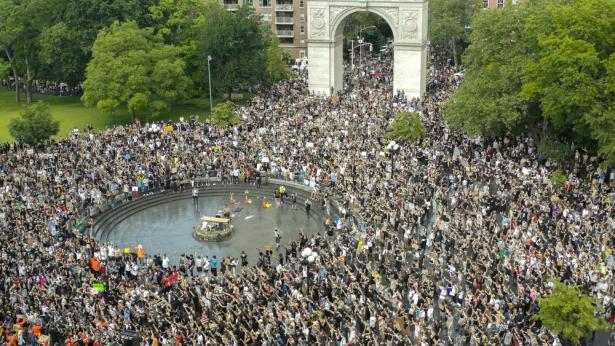 The turmoil in the streets is bigger than we have known. And it is more focused on wealth and power and police, better organized in many respects, more diverse, and far more sustained than we have known. Okay, that seems incredible, but not inexplicable. The confluence of vapid corrupt officials, hatred for Trump, massive corona revelations about health care and market driven economics, social distancing and isolation tensions, persistent massive economic dislocation now grown to catastrophic proportions, and yet another incredibly disgusting racist police atrocity on top of festering systemic racism in so many forms all acted together, and a dream deferred exploded.

But what about the impact of the resistance? I find this harder to explain. On the one hand, it is incredible people are sustaining street actions so long, and in a pandemic, no less. But still, two weeks is not two months or two years. And yet newsrooms are in turmoil as reporters are rising above the censorious ceiling that normally confines media thought. Yes, I know we don’t suddenly have flocks of reporters donning Chomsky/Herman t-shirts and storming their bosses’ offices, but flocks of reporters are suddenly tuning into issues of race, the economy, and health care too – and writing about systemic oppression, no less – and their reports and materials are actually appearing. And not they, but a lot of higher ups are worried about their jobs. Some are already resigning under pressure due to editorial priorities and not reduced revenues. And, again, the resistance is just two weeks in the streets.

And the Minneapolis City Council voted to disband their police force. Really? Yes, really. Prosecuting cops who did a public lynching with a boot rather than a rope is a good win. A major city disbanding its police force? Seriously? Yes. And numerous states are proposing or already moving to get police out of schools. Not bad police, not rotten apples, all police out of all schools. New York has not only outlawed choke holds, a limited but nice step, but also pledged to move funds from police budgets to social services. A far more profound step. “Defund Police” had moved from an invisible thought dream of a few committed anti police violence activists to a demand not only widespread on the streets, but even in some suites.

At the same time, overall media coverage of confrontations is not optimal, but it is vastly better than anyone I know who pays attention to media would have remotely anticipated. Attention to police violence and racism is not yet what it ought to be, but it is quickly getting there. I mean really – Roger Goodell, autocratic commissioner of the systemically racist, sexist, militarist, National Football League says he, and the league, were wrong not to listen to player protests – not to listen to Colin Kaepernick who the league blackballed. From now on, dissent welcomed. Radio and TV sports shows are spending hour after hour talking about racism, and not just personal racism by neanderthal specimens letting all else off the hook, but systemic racism. You may think that this is all just some sports nonsense temporarily aimed at protecting brands, but if you consider the role of football in society, the role of sports and sports talk, and the attention it all gets from diverse mainstream audiences, it is a very big deal and another sign that two weeks of protests are rocking the whole damn boat. And even if it is entirely cynical, and I don’t think it is, brands feeling they have to be anti-racists is a victory itself.

So will this persist? Will these trends persist? And for that matter, if activists become comparably militant and creative over additional intersecting economic, political, and social demands, will media coverage remain somewhat sensible? Will some officials take up those cries, too? Will reforms that bring more desires follow?

Why is the repression so far – while hideous – undeniably somewhat muted? Why is the media coverage – while far from optimal – vastly better than might have been expected? Why has the outrage over racism and police policy that even emphasizes the underlying racial system already found support in many areas normally not only totally deaf to dissent but in fact aggressively hostile to popular protest and demands, including not only many prominent journalists, many officials in office, many athletes, sports officials, and pundits, but even some sectors among police?

That is the stuff I find hard to understand. Two weeks. I suspect at least three interconnected factors are primarily accelerating successes.

What, then, does the above tell us? Nothing fancy. No special studies required. Don’t need degrees and five syllable words, thanks.

Activism can breed hope. Hope can breed more activism. Follow that cycle for a while and incredible options open. Follow longer, and real change is gonna come.

Doing can induce thinking. Thinking can inform doing. Follow that cycle for a while and focus, intensity, and strategic wisdom enlarge. Change is gonna be smart.

Growing numbers and enlarging and intensifying focus can make room for folks otherwise hampered to do what they ought to do. Welcome it. Another brick in the wall of change.

Growing numbers and enlarging and intensifying focus can convince those who rule that their own situations are at risk, and that providing concessions is wiser than going to the mattresses…that is, that concessions are wiser than all out repression. Celebrate concessions while gearing up to win more. And yes, they will try to take credit. They will try to deny they were coerced by activism. It was their fine inclination despite the activism. Fine, reject that. Clarify the truth that they didn’t give, we won, but don’t snatch defeat from the jaws of victory by making believe gains aren’t gains.

But, a word of caution. I have heard a lot of analogies for what is now happening. Analogies can clarify, and two scare me. One, May ‘68 in France, and two, just an eyeblink ago, truly massive resistance in Greece.

In both those cases society was rolling along, ready to explode, like ours last month, and acts of state repression were the match, like here, now, as well. In Paris, believe it or not, a now laughable repressive rule change bearing on who could and who could not stay out late and visit dorm rooms at Paris’s most famous college led to conflict, which led to dissent and demonstrations, which were repressed, and in response,,,,,, then exploded into every nook and cranny of France. In Greece, the police killed a young anarchist in the part of town conceded to be Anarchist home base. Angry youth went into the streets there, in the district. Repression was unleashed. People all over Greece went into the streets from Athens to the smallest outlying towns. An estimated 40% of the population rallied, marched, and fought.

In both France and Greece, that is, the eruptions were enormous. It didn’t just feel like everything was up for grabs. It was true that everything was up for grabs. Question everything was a description of what was occurring and not a request for what ought to occur. The number of people in motion, truly aroused, was enormous – far more even than so far in the U.S. But there was finally a sad conclusion. In both France and Greece the turmoil and creativity impacted tens of millions, but society was not fundamentally to its roots changed for the better. In fact, in Greece, arguably when the dust finally cleared things had even gotten worse. There were lots of factors, in both places, as with any social process.

So here is an image. In each case you had abiding suffering but relative quiescence. You then had an event nominally like others, but for whatever reasons it kicked off a massive reaction. Repression arrived, but the reaction grew and grew. But then, in mere months, things settled down. Revolutionary stirrings went back to sleep rather than coming of age to persist.

Boring, alienated, corporate dominated, oppressive existence almost overnight became hope and incredible upheaval, but it then reverted back to boring, alienated, corporate dominated, oppressive existence. The moment of hope and upheaval was incredible. The inability to parlay it into lasting movement organization and campaigns continually challenging every sphere of social life and persisting to win gain after gain on the road to a literally new society, was a fact we must assess because we need our moment to last.

We need to come away from the current upheavals with organization, with vision and goals, with program and campaigns that all persist and mature and strengthen rather than folding back into business as usual. If we can traverse from outrage and upheaval to sustained resistance and construction plus on-going outrage and upheaval, we can win a new world. It will not take a week, a month, or a year, but will instead require a process that persistently unfolds from now into a winning future. But if we can’t make what has magnificently emerged magnificently last – this moment will become lots of people’s glory days, but will not persist unto victory.

“Make It Last, Make It Grow”

And a golden oldie –

“Power to the People”

Michael Albert is a founder and current member of the staff of Z Magazine as well as staff of Z Magazine`s web system: ZCom (www.zmag.org).  He is the author of 21 books. Most recently these include: Fanfare for the Future (ZBooks), Remembering Tomorrow (Seven Stories Press), Realizing Hope (Zed Press) and Parecon: Life After Capitalism (Verso).