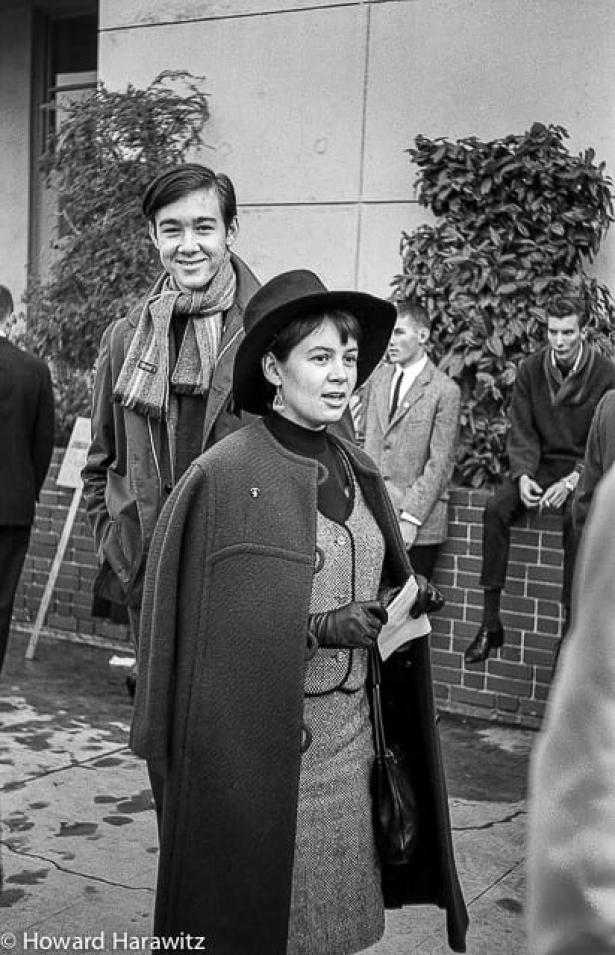 Margy Wilkinson as a young woman in 1964 at an FSM protest. Her husband Tony is at the left., Photo: Howard Harawitz

Margy Wilkinson, who led KPFA through some of its toughest times, and who was involved with many issues in Berkeley — around workers’ rights, homelessness, curtailing police power and making sure that South Berkeley was not inextricably changed by gentrification — died Saturday night at the age of 76.

Wilkinson, who had lived in South Berkeley for 40 years, was a co-founder of Friends of Adeline. She served on the board of Consider the Homeless and chaired the Berkeley Labor Commission. She also served as the executive director of the Pacifica Network, chaired the KPFA Local Station Board, volunteered in the radio station’s phone room during fund drives, and at the KPFA Crafts Fair.

Before she got involved with city issues, Wilkinson was at UC Berkeley, where she was involved with the Free Speech Movement in 1964 and then went on to organize the first contract for classified workers at the university.

Brian Edwards-Tiekert, the co- host of Upfront on KPFA, wrote this tribute to Wilkinson:

Margy was a life-long organizer for social and racial justice, for a time the board chair and Executive Director of the radio network I work for, and a transformative community organizer in the neighborhood where I live.

Jack Radey tells me Margy’s first encounter with organizing was when her mother, Helen (Corbin Lima), toted her in a sling from boat to boat in Eureka Bay, where Helen was organizing fishermen. Then came Margy’s first experience of the law: watching her father, Mickey Lima, stand trial under the Smith Act for being a leader in the Communist Party. He was convicted and sentenced to five years. She was seven.

Margy enrolled at UC Berkeley in time to join the Free Speech Movement, the opening salvo in a decade of upheaval at American colleges. After graduating, she returned to campus as a worker and began organizing the UC system’s clerical and other classified employees. This was more than a decade before they had legal access to collective bargaining. Eventually, she’d help build, and run rank-and-file bargaining for, a union representing some 19,000 workers across the system. In the meantime, she worked on campaigns to stop wars, support worker struggles abroad and defend affirmative action.

When she retired from UC, Margy came to KPFA, a place she’d known for covering the struggles she was part of her entire life. She won election to our Local Station Board in 2010. A day later, the people in charge of our parent nonprofit, Pacifica, kicked off an internal war by firing the staff of our local morning show (including me). In short order, the local board made Margy chair, and Margy revealed a knack for convincing managers installed by Pacifica that they were wrong.

Margy had the steadiness of a rock and not a hint of meanness. She’d meet with people she was fighting, take an interest in them, and wear them down with the compassion of someone who knows the person they’re talking to is on the wrong side of history and feels badly about how that will go if they don’t change.

Within three years, Margy was chairing Pacifica’s National Board, and serving as its interim Executive Director, during one of our network’s most tumultuous periods. A lot of us might not be broadcasting today, if not for her work then. And winning wasn’t enough: she also worked on reconciliation. When we had talks to heal from our infighting, they mostly happened at Margy’s dining table, on Sunday mornings, over brunch.

I don’t think Margy ever saw much difference between organizing, and building a loving community. Her husband Tony said, “living with Margy is like sharing the house with 500 people.” (The day after she died, I saw about 30 stop by their stoop to mourn with him, as I was doing the same.)

For a long time, Margy and Tony had organized an annual block party in front of her home, across from Malcolm X Elementary. Margy used the list from the party to help build an organization for her neighborhood — my neighborhood too — which is Berkeley’s most heavily Black, and its poorest.

In a few short years, Friends of Adeline fought off a push to de-fund Black-serving nonprofits, saved an elder neighbor from having his home taken away, forced a developer to negotiate community benefits, and organized a 100-person strong mutual aid network helping vulnerable neighbors during COVID. When a homeless encampment went up on public land nearby, Margy didn’t ask what to do about them — she asked what they needed. In short order, she’d had a temporary restroom and hand-washing station delivered, and all but dared the city to remove them.

This Saturday, I saw Margy at a Black Lives Matter protest in Berkeley. Our councilmember, whom she’d helped to elect and then buttonholed over every vote she disagreed with, said that she seemed optimistic. Her husband, Tony, told me, “that’s how she lived.”

Margy Wilkinson died unexpectedly that night, in her bed, in her home, in her loving community, at the age of 76.