Investor coalition worth $620 billion pushed FedEx, Pepsi, and Nike to change stance, prompting team owner to announce a review of the name. 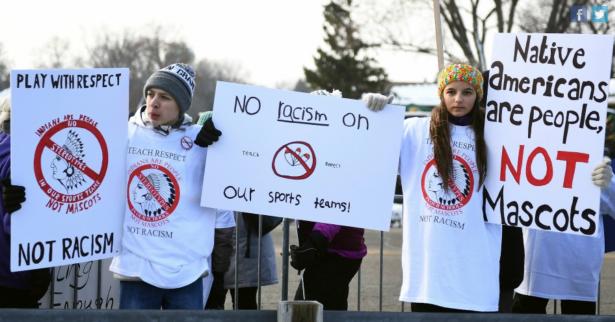 Protestors rally outside of Lambeau Field prior to the game between the Green Bay Packers and the Washington Redskins on December 8, 2019 in Green Bay, Wisconsin, Stacy Revere/Getty Images

Washington Redskins owner Dan Snyder announced Friday that he would conduct a "thorough review" of his NFL team's racist name, which has been the target of protests for decades by Indigenous people and other critics who say the name amounts to a harmful slur.

Snyder's announcement comes after at least five decades of public actions by Indigenous tribes and civil rights organizations, but the catalyst for the review appeared to be demands made by the team's corporate partners.

FedEx, which sponsors the Redskins' home stadium and whose CEO is a partial owner of the team, released a statement Thursday saying, "We have communicated to the team in Washington our request that they change the team name."

Nike also removed Redskins merchandise from its online store on Thursday. The two companies, along with PepsiCo, last week received letters from 87 of their investors—worth a collective $620 billion—calling on them to end their business partnerships with the Redskins unless the team changed its name.

Snyder's signal that a potential name change could be forthcoming came after decades of outcry from Indigenous people, all of which he dismissed in 2013 by claiming he would "never change the name."

In 1968, the National Congress of American Indians launched its first campaign aimed at removing harmful stereotypes and images from U.S. media and popular culture. Four years later, 11 activists approached the team for the first time to request a name change, and in 1992, an estimated 3,000 people demonstrated at the Super Bowl to demand the change in the largest-ever protest over the issue.

Snyder's announcement came amid historic racial injustice protests across the U.S., sparked by the killings of George Floyd, Breonna Taylor, and Ahmaud Arbery.

Snyder has also faced recent pressure from elected officials to change the Redskins' name, as he aims to move the team from FedEx Field in Maryland to RFK Stadium in Washington, D.C., the city the team represents. The stadium sits on government-owned land and lawmakers including Del. Eleanor Holmes Norton (D-D.C.) have demanded the name change before Snyder purchases the stadium.

Rep. Raul Grijalva (D-Ariz.) has also demanded the name be changed, saying it is up to Snyder to "step into this century."

"There is no way to justify" keeping the name, Grijalva said Thursday.