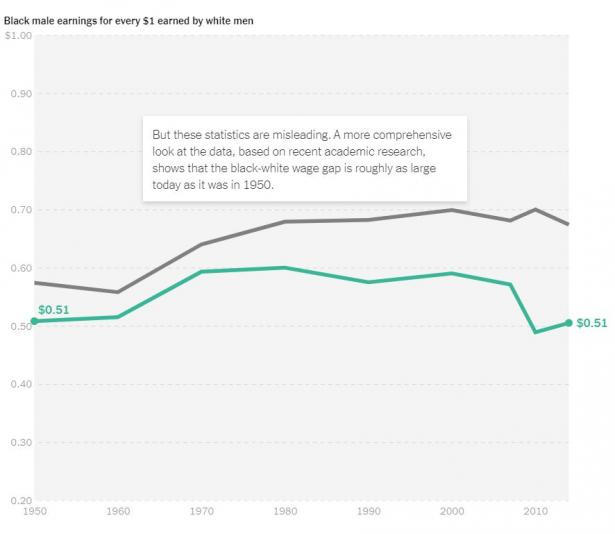 That’s remarkable. Despite decades of political change — the end of enforced segregation across the South, the legalization of interracial marriage, the passage of multiple civil rights laws and more — the wages of black men trail those of white men by as much as when Harry Truman was president. That gap indicates that there have also been powerful forces pushing against racial equality.

Before getting into the causes, though, I want to explain the difference between the best-known wage statistics and the more accurate version. The traditional numbers are incomplete in a way that many people do not realize: They cover only workers. People who don’t work are ignored. This group includes students, full-time parents, people who have given up on finding work and people who are incarcerated.

Excluding them wouldn’t present a problem if the percentage of nonworkers had remained fairly stable over time. But it has not. “There’s been a tremendous run-up in non-work among prime-age men,” says Kerwin Kofi Charles, an economist and the dean of the Yale School of Management.

One reason is that many middle-aged men — of all races, although disproportionately black — have dropped out of the labor force, and are neither working nor looking for work. The shrinking number of decent-paying blue-collar jobs has left many people who didn’t attend college without good job opportunities, and they have responded by no longer actively looking for work.

Becky Pettit, a sociologist at the University of Texas, refers to these incarcerated men as invisible. She has written a book titled, “Invisible Men: Mass incarceration and the myth of black progress.”

People considered “unemployed” represent a small — and declining — share of those out of work. 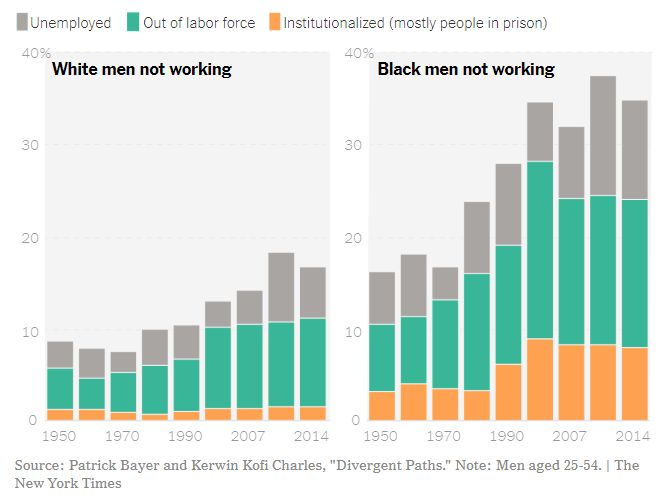 The traditional statistics on the black-white wage gap ignore these trends, because they examine only people with earnings. As social scientists put it, the traditional numbers ignore the “zero values.”

This means that the statistics on the wage gap are looking at a shrinking share of the population over time. They overlook the roughly 30 percent of black men and 15 percent of white men between the ages of 25 and 54 who had not been working in a given week during recent years. (Those shares are even higher now, given the economic downturn.)

He and another economist — Patrick Bayer of Duke — undertook a research project to fill that hole. They collected census data dating back to 1940 and constructed wage statistics that included men who were not working. They are also conducting a follow-up project about women, Mr. Bayer said. The gap between black and white women may have narrowed, but only modestly.

The research by Mr. Charles and Mr. Bayer shows that once all men — working and not working — are included, the picture changes: 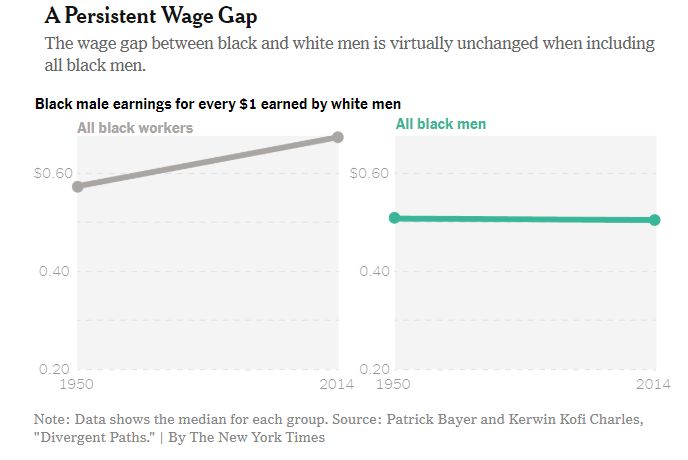 The black-white wage gap shrunk substantially from 1950 to 1980, and especially during the 1960s. Civil-rights laws and a decline in legally sanctioned racism most likely played some role. But the main reasons, Mr. Charles said, appear to have been trends that benefited all blue-collar workers, like strong unions and a rising minimum wage. Because black workers were disproportionately in blue-collar jobs, the general rise of incomes for the poor and middle class shrank the racial wage gap.

One law was especially important: the 1966 amendment to the Fair Labor Standards Act. When Congress passed the original law, during the New Deal, it deliberately exempted service and other industries with many black workers from the minimum wage. “Just expanding the minimum wage to those industries,” Ellora Derenoncourt, a University of California, Berkeley, economist, said, “boosted the relative wages of black workers substantially.”

Since 1980, however, the wage gap has increased again, and is now back roughly to where it was in 1950. The same economic forces are at work, only in the opposite direction: The minimum wage has stagnated in some states, unions have shrunk, tax rates on the wealthy have fallen more than they have for anyone else and incomes for the bottom 90 percent — and especially the bottom half — have trailed economic growth. Black workers, again, are disproportionately in these lower-income groups.

One nuance is that the racial wage gap has shrunk somewhat among higher-income men. That’s a sign that more African-Americans have broken into the upper middle class than was the case in prior decades: 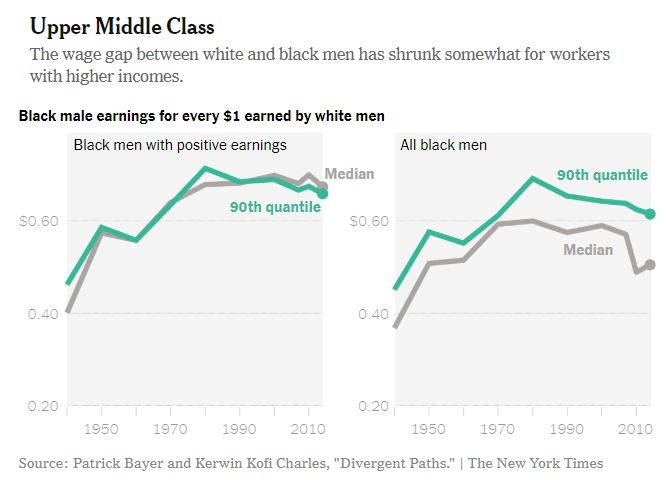 This history also points to some of the likely solutions for closing the racial wage gap. An end to mass incarceration would help. So would policies that attempt to reverse decades of government-encouraged racism — especially in housing. But it’s possible that nothing would have a bigger impact than policies that lifted the pay of all working-class families, across races.

“Black people are concentrated in low-paying jobs if they have jobs,” Ms. Derenoncourt said. “This has been one of the most egregious forms of inequality over the last 40 years: There has been almost no wage growth for the bottom half of the wage distribution.”

David Leonhardt writes The Morning, The Times's main daily newsletter. Previously at The Times, he was the Washington bureau chief, the founding editor of The Upshot, an Op-Ed columnist, and the head of The 2020 Project, on the future of the Times newsroom. He won the 2011 Pulitzer Prize for commentary. @DLeonhardt • Facebook