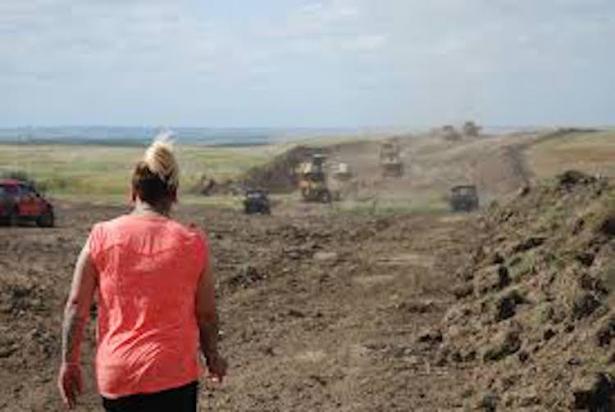 A federal judge has ordered the Dakota Access Pipeline to shut down and remove all oil within 30 days, a huge win for Standing Rock Sioux Tribe, the Cheyenne River Sioux Tribe, and the other plaintiffs.

In a 24-page order, U.S. District Judge James Boasberg wrote that he was "mindful of the disruption" that shutting down the pipeline would cause, but that it must be done within 30 days. The order comes after Boasberg said in April that a more extensive review was necessary than what the U.S. Army Corps of Engineers had already conducted and that he would consider whether the pipeline would have to be shuttered during the new assessment.

“Following multiple twists and turns in this long-running litigation, this Court recently found that Defendant U.S. Army Corps of Engineers had violated the National Environmental Policy Act when it granted an easement to Defendant-Intervenor Dakota Access, LLC to construct and operate a segment of that crude-oil pipeline running beneath the lake,” said the opinion from Boasberg.

Meanwhile, the U.S. Supreme Court handed another blow to the disputed Keystone XL pipeline from Canada by keeping in place a lower court ruling that blocked a key permit for the project.

Monday's order also put on hold an earlier court ruling out of Montana as it pertains to other oil and gas pipelines across the nation.

That’s a sliver of good news for an industry that just suffered two other blows — Sunday's cancellation of the $8 billion Atlantic Coast gas pipeline in the Southeast and the ruling that shut down the Dakota Access oil pipeline.

"The Court does not reach its decision with blithe disregard for the lives it will affect," Boasberg wrote in Monday's Dakota Access ruling. "It readily acknowledges that, even with the currently low demand for oil, shutting down the pipeline will cause significant disruption to DAPL, the North Dakota oil industry, and potentially other states.

This doesn’t appear to be the first time Boasberg has reversed or rescinded a previous judgment.

According to BallotPedia, since 2018 the judge has ruled against the U.S. Immigration and Customs Enforcement for detaining asylum seekers more than seven days and also stopped states from implementing work requirements for Medicaid programs.

Ron Ness, president of the North Dakota Petroleum Council, called the ruling "shocking" and noted that the pipeline is moving 570,000 barrels of Bakken oil a day.

"I think there's a lot of questions about the authority of this liberal district court judge to make such a significant ruling," Ness said of Boasberg, who was appointed by former President Barack Obama. "There is no doubt that the lawyers are all gearing up and looking at every possibility of a stay or an appeal or something."

“There are many problems with the information ETP (Energy Transfer Partner) submitted to the Corps of Engineers on DAPL. ETP estimates that 12,500 barrels of oil would be the worst-case scenario, but that is based on a nine-minute shutdown time. By looking at prior spills, we know that the true shutdown time is hours, and can even take days. Now, the fight continues, but it is in federal court.” —Chairman Mike Faith of the Standing Rock Sioux Tribe (Photo courtesy of Standing Rock Sioux Tribe, Facebook 2018)

“Today is a historic day for the Standing Rock Sioux Tribe and the many people who have supported us in the fight against the pipeline,” Faith said. “This pipeline should have never been built here. We told them that from the beginning.”

The pipeline extends more than 1,000 miles from North Dakota to Illinois – but the issue is the portion of the project that is buried under the Missouri River. The Standing Rock Sioux tribe said a leak will contaminate their drinking water and sacred lands.

"I applaud the actions of the US District Court in finding what we knew all along, that this pipeline, like many other actions taken by the US government, is in fact illegally operating," read the statement. "The fact that this operation had been operating illegally for three years before this conclusion was finally made shows you the power that money holds on the American government."

Late in the Obama administration the Corps of Army Engineers announced it would suspend approval of the project while an Environmental Impact Statement was prepared. “A few months later, however, following the change of administration in January 2017 and a presidential memorandum urging acceleration of the project, the Corps again reconsidered and decided to move forward,” the opinion said. “It granted the sought permit, construction was completed, and oil commenced flowing through the Dakota Access Pipeline. “

Bernie Sanders: The Standing Rock Sioux Tribe and millions of others who fought against the Dakota Access Pipeline showed us the power of standing together against injustice. We can create a future where a clean environment and indigenous rights matter more than Big Oil’s profits.

Energy Transfer last year proposed increasing the pipeline's capacity to as much as 1.1 million barrels to meet growing demand for oil from North Dakota, without the need for additional pipelines or rail shipments.

Before the coronavirus pandemic devastated the U.S. oil industry, daily oil production in North Dakota - the nation's No. 2 oil producer behind Texas - was at a near-record 1.45 million barrels daily. The state's output slipped to below 1 million barrels daily in May amid low energy prices and sparse demand.

Permits for the project were originally rejected by the Obama administration, and the Army Corps of Engineers prepared to conduct a full environmental review. In February 2017, shortly after President Donald Trump took office, the Corps scrapped the review and granted permits, concluding that running the pipeline under the Missouri River posed no significant environmental issues.

The Corps said that opinion was validated after an additional year of review, as ordered by Boasberg in 2017.

Boasberg had ruled then that the Corps "largely complied" with environmental law when permitting the pipeline but ordered more review because he said the agency did not adequately consider how an oil spill under the Missouri River might affect the Standing Rock Sioux's fishing and hunting rights, or whether it might disproportionately affect the tribal community.

“Yet, given the seriousness of the Corps’ NEPA error, the impossibility of a simple fix, the fact that Dakota Access did assume much of its economic risk knowingly, and the potential harm each day the pipeline operates, the Court is forced to conclude that the flow of oil must cease,” Boasberg’s ruling stated.

In a statement, the Indigenous Environmental Network is celebrating all the prayers and support the #NoDAPL movement has received over the years. While Boasberg’s opinion clearly states the flow of oil must stop, the organization is prepared to fight to see that through.

“The Standing Rock and Cheyenne River Sioux Tribes have shown the world that treaty rights and environmental justice are not token concepts without merit, but rather tangible arguments that inherently protect the sacredness of mother earth. We will continue to fight until DAPL is stopped completely,” the statement said.

Kolby KickingWoman, Blackfeet/A'aniih, is a reporter/producer for Indian Country Today. He is from the great state of Montana and currently reports and lives in Washington, D.C.

The Associated Press contributed to this report.