Without Radical Community Education, We Won’t Move Beyond “Comfortable” Reforms

Community education cannot be considered an “add-on” — we must center it as an integral part of our ongoing organizing. We need to understand the need for political education-- taking lessons from work on Israel/Palestine and anti-Islamophobia. 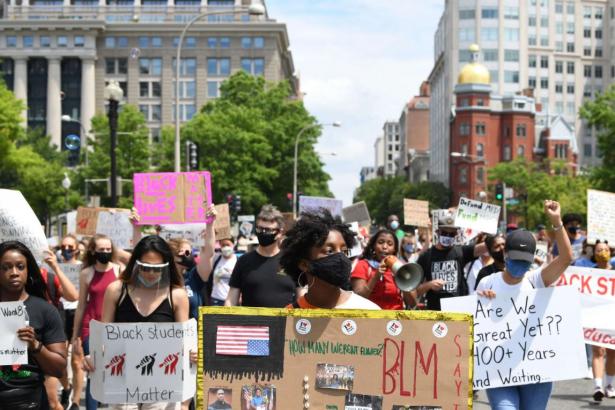 Demonstrators march towards the U.S. Department of Education for the Black Students Matter march and rally, which was organized by Educators for Equity on Friday, June 19, 2020, in Washington, D.C.,Matt McClain / The Washington Post via Getty Images // Truthout

Many of us are reflecting on what it means to engage critically within our own communities as a way of supporting and being accountable to broader movements for justice. In this moment, prioritizing community education — a process of learning and teaching together toward meaningful social change — is one of the many ways that those of us not directly targeted by anti-Black racism can collectively support and participate in movements to abolish policing, prisons, and all systems that profit off of and perpetuate anti-Blackness.

What does community education work look like? It requires honest, reflective examination. It means thinking intentionally about what and how it means to be a partner in the struggle. It means working deeply within the communities we are part of — in my case, largely white Jewish communities — since those of us who have benefited from white supremacy and its institutions need to understand the history, current realities, our complicity, and how to act with integrity. It means that our learning is concretely tied to how we act, to what we do.

To ensure that our work is meaningful, we must have as much clarity as we can about the principles that propel that work forward. I have been reflecting on community education projects I have been part of, such as Jews Against Anti-Muslim Racism (focused on challenging anti-Muslim racism) and Facing the Nakba (addressing justice in Palestine). In each initiative, the work we did within our own communities was shaped and informed by the broader movements we were part of, which were led by those most impacted by the unjust systems we were challenging. As Jewish partners in this work, we considered ourselves accountable to these movements for justice, which meant that our community education work was not done in isolation, but emerged in the context of our ongoing organizing with and within broader movements for justice. Our resources and curricula grew out of the organizing, analysis and resources of those in the forefront of these movements for justice. Our work was continuously evolving, encompassing an ongoing process of learning, reflection, deeper learning and greater reflection, always with an eye and commitment toward accountable, effective action.

Right now, within the largely white Jewish communities I am interacting with, I am seeing greater acknowledgment about police brutality and anti-Black racism. However, the conversations often slip into support for some form of police “reform” rather than engaging deeply with the ideas, visions and strategies being put forth by abolitionists. As Critical Resistance notes, abolition of the prison-industrial complex “is a political vision with the goal of eliminating prisons, policing, and surveillance and creating lasting alternatives to punishment and imprisonment.”

These conversations, and the nature of people’s responses, in many ways remind me of discussions I’ve been part of (also with largely white Jews) about Palestine and anti-Muslim racism. In conversations about Palestine, even when there is a recognition of Israel’s oppressive policies and practices, the discussions often begin and end at Israel’s occupation of the 1967 territories as the “problem” to be solved. This analysis fails to address the actual heart and root of what happened, that is, the Nakba — the expulsion of 750,000 Palestinians from their land and homes beginning before and during Israel’s creation of 1948. To not recognize this truth, and instead propagate the more “palatable” analysis of the problem starting in 1967, leads to support of “solutions” that don’t address the foundations of injustice.

Similarly, while many within our communities have acknowledged the existence of Islamophobia, it is more often than not focused on individual attacks, and not on opposing state-sanctioned anti-Muslim violence as evidenced by the “war on terror” that targets and demonizes Muslims in the U.S. and across the globe. To ignore state-sanctioned violence means failing to address the biggest perpetrators of anti-Muslim violence in this country — the U.S. government and its military.

Our work requires not only understanding the ways these injustices are manifested, perpetuated and embedded within the very structures of our society, but also in how they play out within our communities.

Part of our community education work means making visible, and looking critically at, the profound differences between working toward reforms within violent systems, which so often only serve to perpetuate underlying injustices, and working to eradicate those systems and build alternatives.

These examples might reflect the difference between liberal vs. radical analyses, but I believe it also reflects something more: that we too often and easily embrace solutions that keep us feeling comfortable, or that don’t really shake us up, while also feeling like we’re doing something to support social change. These “comfortable” solutions stand in contrast to those that compel us to address systemic, structural issues at their core and challenge our role (individually and collectively) in perpetuating such systems of oppression. So, our work is not to allow ourselves to feel comfortable, or self-satisfied, but to dig deeper and deeper so that our organizing reflects that depth, responds to the calls from impacted communities, and enables us to participate in broader movements for true transformation.

Community education means developing learning opportunities together as well as curricula and pedagogies to support that learning, drawing upon the vast resources that have already been created from those who have worked long and hard on these issues for years and years. Many of us may be new to issues of police and prison abolition, but there is a long history of organizers and community members, particularly from Black communities, who have been laying the groundwork for where we are today and who have been envisioning and working toward a just, prison-free, police-free world. Some of that critical work comes from Mariame Kaba, Ruth Wilson Gilmore, Angela Davis, Critical Resistance, Dean Spade, Survived & Punished, Alex Vitale, Black and Pink, INCITE!, Reclaim the Block, Dream Defenders, Bay Area Transformative Justice Collective, #8toAbolition, and many others.

Our work requires not only understanding the ways these injustices are manifested, perpetuated and embedded within the heart and very structures of our society, but also in how they play out within our communities, too often resulting in active support for, and participation in, oppression rather than liberation. Serious engagement in community education cannot be considered an “add-on” or intended as an academic exercise. Rather, we need to prioritize it as an integral part of our ongoing organizing that requires challenging and pushing ourselves to deepen our knowledge, shape and inform our thinking, and, most importantly, propel us to genuinely and courageously participate in work for justice.

[Donna Nevel, a community psychologist and educator, is a founding member, with Elly Bulkin, of Jews Against Anti-Muslim Racism; a member of the coordinating team of Facing the Nakba; and was a co-founder, with Marilyn Kleinberg Neimark, of Jews for Racial and Economic Justice. She is a co-director of PARCEO, a community resource, education and research center rooted in principles of Participatory Action Research (PAR).]