"The deliberate delaying of Americans' mail delivery would be a stunning act of sabotage against our Postal Service." 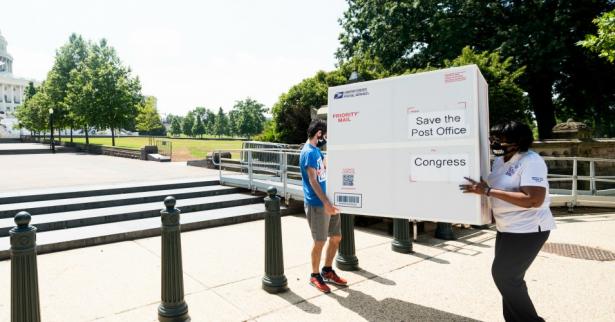 Postal workers and their allies in Congress are vowing to fight back after the new head of the U.S. Postal Service—a major donor to President Donald Trump and the Republican Party—moved this week to impose sweeping changes to the popular government agency as it faces a financial crisis manufactured by lawmakers and exacerbated by the Covid-19 pandemic.

The Washington Post reported late Tuesday that Postmaster General (PMG) Louis DeJoy, who took charge last month, issued memos announcing "major operational changes" to the USPS "that could slow down mail delivery, warning employees the agency would not survive unless it made 'difficult' changes to cut costs."

"Analysts say the documents present a stark reimagining of the USPS that could chase away customers—especially if the White House gets the steep package rate increases it wants—and put the already beleaguered agency in deeper financial peril as private-sector competitors embark on hiring sprees to build out their own delivery networks," the Post noted.

According to the internal USPS memos (pdf) obtained by the Post, "DeJoy told employees to leave mail behind at distribution centers if it delayed letter carriers from their routes," a change critics said could threaten access to absentee ballots at a time when vote-by-mail is more important than ever.

"If the plants run late, they will keep the mail for the next day," reads a document titled, "New PMG's expectations and plan."

"The deliberate delaying of Americans' mail delivery would be a stunning act of sabotage against our Postal Service," Rep. Bill Pascrell, Jr. (D-N.J.) said in a statement. "If these reports are accurate, Trump and his cronies are openly seeking to destroy the Post Office during the worst public health crisis in a century."

"With our states now reliant on mail voting to continue elections during the pandemic, the destabilizing of the post office is a direct attack on American democracy itself," Pascrell added. "It has been 59 days since the House passed $25 billion to keep USPS alive. The Senate must pass it now. Democracy hangs in the balance."

With the USPS at risk of completely running out of cash by the end of September without an infusion of emergency funding, postal workers and members of Congress have warned that the Trump administration could attempt to exploit the agency's financial struggles to advance the longstanding right-wing goal of privatizing USPS.

In March, Congress approved a $10 billion emergency USPS loan, but the Treasury Department has yet to release the funds as the Trump administration attempts to use the money as leverage to force changes to the agency's finances and operations.

Mark Dimondstein, president of the 200,000-member American Postal Workers Union, said in response to the Post's reporting that his organization will vigorously oppose the new operational changes sought by DeJoy.

U.S. Mail Not for Sale, a worker-led coalition dedicated to protecting the Postal Service from right-wing privatization efforts, is urging Americans to take part in a July 23 call-in day of action urging the Senate to approve desperately needed financial relief for USPS.

"Our movement is growing. Together we can save the Post Office and convince lawmakers to do their jobs," the coalition said. "Multiple bills have been introduced that would provide $25 billion in Covid-19 related relief for the Postal Service. The Senate comes back from recess in less than two weeks' time. We need to keep up the pressure to make them vote to end this crisis."