music Why the Chicks Dropped Their "Dixie"

The all-female country band, formerly "The Dixie Chicks," which survived an instance of proto-cancel culture for its politics in the past, again wants to meet the current moment. 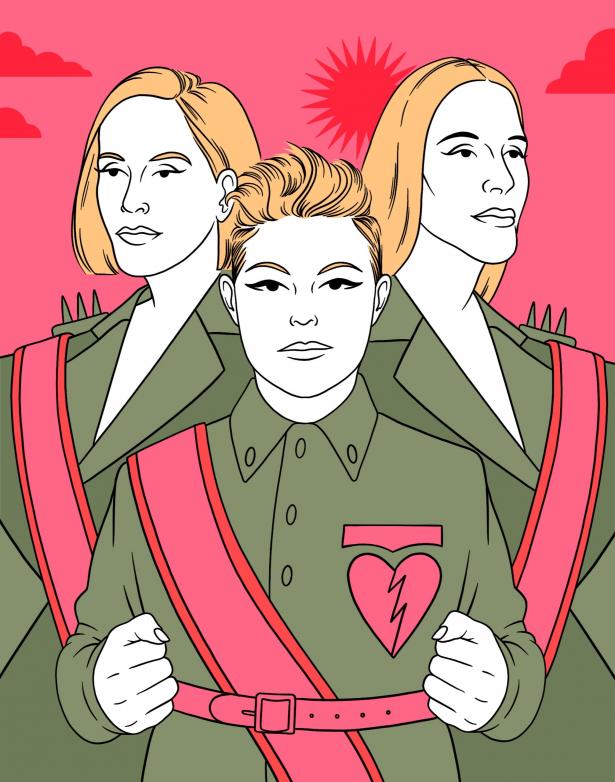 In late June, the Dixie Chicks dropped the word “Dixie” from its name. The band’s statement was brief and elegant: “We want to meet this moment.” The Dixie Chicks were founded in Texas, in 1989. Back then, the band was a four-piece. (The sisters Martie and Emily Erwin, now Martie Maguire and Emily Strayer, are the remaining original members; since 1995, the band has been fronted by the singer and guitarist Natalie Maines.) They wore prairie skirts and fringed blouses, and played a mixture of bluegrass and traditional country—cowgirls with chops. The band’s name was a riff on “Dixie Chicken,” a 1973 album by the chooglin’ rock band Little Feat. Sifting through early press coverage of the group, I couldn’t find a single critic who thought the name was repugnant.

Yet, among historians, there is little ambiguity about what the word “Dixie” communicates. Its use as a doting nickname for the Confederacy was popularized by “I Wish I Was in Dixie’s Land,” a minstrel song published in 1860 and usually performed in blackface. The song is credited to Daniel Decatur Emmett, a white man from Knox County, Ohio, though the scholars Howard and Judith Sacks have suggested that Emmett stole the tune from the Snowdens, a family of freed slaves who performed and farmed around Emmett’s home town.

“Dixie songs”—which typically expressed nostalgia for the antebellum South—continued to appear throughout the first decades of the twentieth century. “They were quite popular. Irving Berlin even wrote one,” Karen L. Cox, a professor of history at the University of North Carolina at Charlotte and the author of “Dreaming of Dixie: How the South Was Created in American Popular Culture,” told me recently. She does not find the word to be merely descriptive: “As a scholar of the South, I regard ‘Dixie’ as a term that not only refers to the states of the former Confederacy but is synonymous with segregation.” Cox cited the Dixiecrats, the group formed in 1948, by Strom Thurmond and other Southern Democrats who seceded from the Democratic Party because they disagreed with its support of civil rights. “These resonances are part of what the Dixie Chicks selected when they selected the name, whether they intended to or not,” Gregory Downs, a professor of history at the University of California at Davis, said. “It’s important that they—and everyone who received that message of white Southern pride—think about what they took on.”

Within modern country music, tropes that address a kind of vigilante Southern swagger—an insistence on both the rebelliousness and the deep moral purity of the Southern states—remain wildly popular, even rooted as they are in racial violence. Yet country music itself owes an incalculable debt to the Black string bands and players—the Mississippi Sheiks, Gus Cannon, Frank Patterson, and Nathan Frazier, among others—who predated the proliferation of the phonograph. (There are several compilations of the few Black string bands that did record; two exceptional ones are “Altamont: Black Stringband Music from the Library of Congress” and “Black Banjo Songsters of North Carolina and Virginia.”) Early labels deliberately sold country and hillbilly 78s to white customers, and blues and jazz 78s (or “race records”) to Black customers, thereby enforcing a racial fissure along genre lines.

For the descendants of people subjugated under slavery, neither intention nor ignorance now feels like a reasonable defense of these tropes. Yet white history is frequently marked by a kind of inherited blindness. In “Southern Accents,” published last year, Michael Washburn dissects how, in 1985, Tom Petty—a Floridian—used Confederate iconography to promote a concept album about the South. Washburn suggests that ideas of Southern heritage are frequently and purposefully divorced from the historical record. “We inherit, restate, sometimes re-inscribe these notions, and then represent these ideas to the world,” Washburn writes. “If we push hard enough on just about any part of our life, we plunge through the surface into a history that’s unknown to us even as it structures much of how we live.”

Is it possible to love a place and to also disclaim its history? Does the place begin to disappear when its foundational myths are challenged? Washburn jokingly describes Faulkner’s oft-quoted line about the nature of time—“The past is never dead, it’s not even past”—as “the first Southern-history meme.”

The Chicks have been at the center of controversy before. In 2003, nine days before the American invasion of Iraq, the band performed in London. As Maines introduced the single “Travelin’ Soldier,” she told the crowd that she was ashamed that the President of the United States was from Texas. When the backlash came, it was precipitate, catastrophic, and unrelenting. The Chicks had recently become the only female band in any genre to have released two consecutive diamond-certified albums, signifying sales of ten million copies or more. In our era of anemic chart numbers and fragmented attention, it’s difficult to reckon with sales of that magnitude. There was a lot to lose.

Fans piled CDs in trash cans and set them ablaze. Country radio—which was then operated in large part by the media conglomerate Clear Channel—blacklisted the Chicks’ music. “These are callow, foolish women who deserve to be slapped around,” Bill O’Reilly said on Fox News. Maines received one death threat so credible that the F.B.I. recommended that the band cancel a show in Dallas. (It didn’t.)

What happened to the Chicks in 2003 can be understood now as a foretelling of so-called cancel culture, in which controversial or problematic behavior triggers mass disgust and renunciation. The Chicks endured the onslaught with relative poise. In 2005, the band started writing “Taking the Long Way,” its seventh studio album, with the producer Rick Rubin. It’s an angry, reflective record. At the 2007 Grammys, the Chicks won five awards, including Album of the Year, Record of the Year, and Song of the Year. Then the band went on hiatus.

Fourteen years later, the Chicks have a new album, “Gaslighter.” (Its release was delayed because of the coronavirus pandemic, and some physical copies of the record feature the band’s former name, in bright-yellow letters.) “Gaslighter” is brasher and more pop-oriented than anything the band has done before. Part of this shift feels germane to our era—the idea of genre, as it applies to contemporary music, is growing less and less relevant—but it also feels like a final repudiation of country music, and of a community that mostly failed to support or to understand one of its biggest acts.

Gaslighting is a kind of emotional manipulation in which a bad actor vehemently insists on the veracity of some plainly untrue claim, thereby causing the victim to doubt reality and, eventually, her own connection to it. It’s not a stretch to consider the longtime framing of the word “Dixie” (or any other paean to a South that was reliant on slaves) as a type of gaslighting. Americans have long been told that these representations of the South suggested one thing—some vague idea of regional heritage—when, in fact, they have always meant something else entirely.

In 2019, Maines divorced the actor Adrian Pasdar, and “Gaslighter,” much like “Taking the Long Way,” is a spiritual exorcism of sorts. Maines is at her best when she’s harnessing the righteousness accorded the freshly wronged, and she sings with the vigor and the specificity of a woman who has no one left to please. Perhaps this is what develops on the other side of a grievous public shaming—fearlessness in the face of collapse.

This anger and self-possession make “Gaslighter” a thrill and a delight. “Boy I know exactly what you did on my boat!” Maines sings on the title track, a seething indictment of a failed romance. “I know I’m not crazy, that’s you / Gaslighting / You’re a lie-lie-lie-liar!” The song was co-produced by Jack Antonoff, now the default collaborator for A‑list pop stars, and it’s punchy and lush, buoyed by a rich, three-part vocal harmony. Maines’s boat is the album’s Chekhovian gun, reappearing later on. “You can tell the girl who left her tights on my boat that she can have you now,” she sings on “Tights on My Boat.”

Of course, beneath every bout of unfettered rage is a badly broken heart, and Maines doesn’t always excise the ache from her voice. Her lyrics are both the heart and the point of “Gaslighter.” At times, her vocal phrasing reminds me of that of Taylor Swift, another country-gone-pop superstar who trades in frank confessions and retaliatory choruses. A line like “I hope that when you think of me, you can’t breathe,” from “Tights on My Boat,” feels especially Swiftian in its exactitude and ferocity. (The Chicks made an appearance on “Lover,” Swift’s latest record, and Maines seems to have cleared a path, or at least provided a powerful point of inspiration, for Swift’s recent political awakening.)

Elsewhere, Maines’s vitriol is less autobiographical. “Lies are truth and truth is fiction,” she sings on “March March,” a thumping, echo-laden ode to protest. In an early verse, she references the activist Emma González, a survivor of the Marjory Stoneman Douglas High School shooting:

The video, released in late June, features footage of protests from the past several decades. As the song’s instrumentation—banjo, slide guitar, fiddle—reaches a spare but frenzied climax, the video lists the names of people of color who were murdered by law enforcement, ending with Emmett Till.

Lately, I’ve caught myself referring to a lot of new releases as prescient—work that was written and recorded months or even years ago but feels designed to address the present moment. But good art is always prescient, because good artists are tuned into the currency and the momentum of their time. The Chicks are particularly well positioned to see what’s coming for America right now—how the past two centuries have delivered us to this exact moment, and how we should rise to receive it. ♦

Amanda Petrusich is a staff writer at The New Yorker and the author of “Do Not Sell at Any Price: The Wild, Obsessive Hunt for the World’s Rarest 78rpm Records.”