On March 6, 1,600 registered nurses petitioned the NLRB to form a union, kickstarting one of the largest union campaigns in the country today. North Carolina is the second-least unionized state in the U.S. 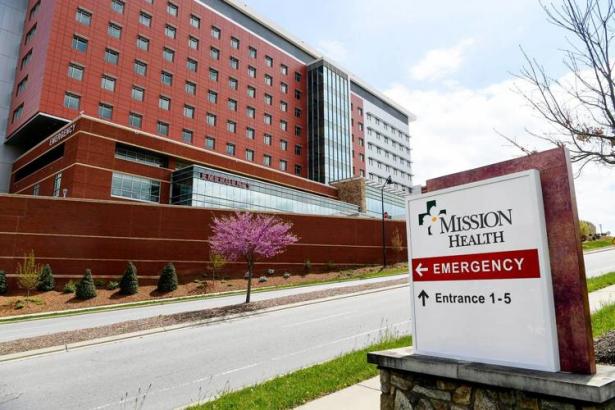 On a clear morning in early March, nurses stood shoulder-to-shoulder in Asheville’s Pack Square Park and demanded a union.

The crowd of a hundred chanted and cheered, hoisting signs and displaying red “Vote Yes” buttons. Some wore the same scrubs from their shifts at Mission Hospital, the largest health care center in Western North Carolina.

On March 6, 1,600 registered nurses petitioned the National Labor Relations Board (NLRB) to form a union, a massive organizing push in the country’s second-least unionized state. Whether the crowd gathering two days later at Pack Square Park knew it or not, they were kickstarting one of the largest union campaigns in the country today.

While an election date remains unset, labor advocates and experts say a union win of this size could spur further labor organizing across North Carolina.

“We put a lot of effort into organizing and gaining support within the hospital,” said Trish Stevenson, a Mission registered nurse who seeks unionization to raise hospital staffing levels to lower nurse-to-patient ratios. “Especially being in the South, people are under the misconception that organizing is illegal.”

The American South, and North Carolina in particular, historically has been inhospitable to unions, organizations representing employees that collectively bargain with management for workers’ benefits and workplace conditions.

“When you get to post-World War II, unions start to have better records on organizing people of color, and the white power structure in this state, like in many other Southern states saw that as a threat,” Zonderman said.

In 1959, North Carolina banned public employee collective bargaining and remains one of only two states — Virginia being the other — to deny public sector workers negotiating powers.

North Carolina is also one of 27 right-to-work states, where employees aren’t made to join a union or pay union dues even when a union represents their workforce. Right-to-work laws drain unions’ revenues and weaken their influence.

According to the U.S. Bureau of Labor Statistics, only 3.4% of North Carolina’s workforce is represented by a union, compared to the national average of 11.6%, putting the state ahead of only South Carolina in unionization rate.

Around 150,000 North Carolinians are union members, with presences at private companies like UPS, AT&T and Goodyear Tire, as well as several federal departments like the Veterans Affairs.

‘HUGE SHOT IN THE ARM’

Perhaps due to the state’s lowly unionization rates, a successful election at Mission could have an outsized regional impact.

“A union victory would be a huge shot in the arm for the union movement, not just in North Carolina but throughout the southeast and across all industries,” said Dan Bowling, who teaches employment law at the Duke University School of Law.

Zonderman said a fast-growing sector for unionizing was nursing.

“The biggest issue for them has not been wages and benefits,” he said. “It’s been staffing ratios.”

If Mission nurses vote to unionize, they would be joining National Nurses United (NNU), the nation’s largest nurses’ union. Doing so would not only elevate the state’s unionization rate but may foreshadow more organizing at regional health care facilities.

“Nurses around the South are looking to the leadership of the nurses at Mission Hospital as they seek to more effectively advocate for their patients and their profession by forming a union with National Nurses Organizing Committee,” NNU Southern Regional Director Bradley Van Waus said in an email.

In February, Mission Health spokeswoman Nancy Lindell told the Citizen Times the hospital was “making progress addressing staffing needs, funding new technological investments and investing in our clinical services,” while acknowledging there was “more work to be done.”

Mission has come out against the union, stating NNU would interfere with collaborative staff relationships and adversely affect patients. To make this point, Mission has posted anti-union signs in the hospital hallways and hired a labor-relations firm, Crossroads Group, to conduct voluntary information meetings to persuade nurses to vote “No.”

“Like all vendors working at our facilities, the labor relations specialists must comply with the same COVID screening, testing, masking, social distancing, and infection prevention protocols as staff and visitors,” Lindell wrote in an email to the Citizen Times.

On the other side of the state, another major hospital sale could lead health care workers to explore their options.

Most of the potential suitors have promised no immediate employment changes if they take over the hospital, which is the major health care provider in Southeastern North Carolina.

But long-term prospects coupled with potential staffing and work-rule changes have some employees nervous, said Gene Merritt, the founder and president of Save Our Hospital, a community group opposed to a sale.

“Yes, there could be a unionization movement down here because of a sale,” he said Thursday.

ORGANIZING AT A DISTANCE

“Physical show of numbers lends tremendous confidence to people, and with the pandemic obviously we’re limited,” Stevenson said. “It threw us a curveball.”

Last year, 70% of elections to unionize ended in favor of organizing, according to NLRB data.

Union leaders say these impediments come at a time when more North Carolinians show growing interest about the benefits organizing may provide. MaryBe McMillan, president of the North Carolina State AFL-CIO, said her organization received an uptick in inquiries from non-unionized workers since the pandemic began.

“They do not feel that they’re adequately protected in the workplace,” McMillan said. “So, while in some ways it may be more difficult to organize, I think there’s more interest.”

A SILVER LINING FOR UNIONIZATION?

In typical times, starting a union is rooted in physical interactions.

With traditional pre-election politicking off the table due to COVID-19, Mission nurses and National Nurses United representatives have relied on a steady online presence: virtual petitions, Zoom meetings, and Facebook groups.

“In some ways, that can be sort of convenient,” Stevenson said.