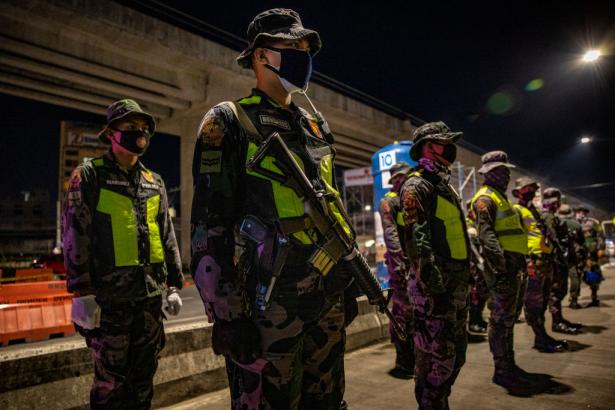 The act, which lawyers say uses a vague and overly broad definition of terrorism, permits warrantless arrests and allows authorities to hold individuals for weeks without charge. It is to be implemented later this month, though at least six petitions against the law have already been filed in the supreme court.

The government says the powers will allow it to respond to threats by militants, but rights groups warn the law could be used to lock up peaceful critics, and may even limit access to humanitarian aid. The law passed on Friday.

“Particularly in the context of Covid, where the role of humanitarian organisations has never been more important in terms of under-serviced communities, any action that hampers work of humanitarian organisations is really irresponsible,” said Professor Fionnuala Ní Aoláin, UN Special Rapporteur on the promotion and protection of human rights and fundamental freedoms while countering terrorism.

The law criminalises anyone who provides “material support” to an activity that is deemed a terrorist act. Though an exemption for humanitarian groups is outlined, Ní Aoláin says this is too limited, and the law could have a chilling effect on agencies delivering aid.

The Philippines has faced a recent increase in coronavirus cases, prompting the government to warn a strict lockdown may be reintroduced. Infections have so far reached 50,359, a fifth of which were confirmed in the past five days. There have been 1,314 confirmed deaths.

Edre Olalia, of the National Union of Peoples’ Lawyers, who plans to file a petition opposing the law in the supreme court, fears the law will have ramifications not just for media, activists and opposition figures, but also members of the public who express opinions online.

“It is unprecedented to give so much power to executive bodies,” he said. The definitions in the law, he added, are “so expansive and broad that even legitimate activity can be considered terrorism”.

Under the law, an anti-terrorism council, appointed by the president, will have the power to designate individuals and groups as terrorists and detain them without charge for up to 24 days. The law also allows for 90 days of surveillance and wiretaps, and punishments that include life imprisonment without parole.

Duterte, who was urged not to rush to sign the act into law, has rejected concerns about its scope. Those not planning to bomb churches and public utilities to derail the nation had nothing to fear, he recently told the public, adding that communists were among the terrorists. The government continues to fight a decades-long communist insurgency, as well as threats from Islamist groups, in the south of the country.

In a televised address on Wednesday, he said: “Do not be afraid if you are not a terrorist.”

Ní Aoláin said the term terrorism was an “inherently suspect category”, however, and that the government was deliberately using the cover of counterterrorism to suppress rights.

Many fear the law’s sweeping definitions will provide a new tool to silence those who are calling for accountability for abuses committed under Duterte’s leadership, including extrajudicial killings carried out during an anti-drug crackdown launched after his election in 2016.

“The hand is already on the trigger and the law will provide the impetus to press the trigger,” added Olalia.

Over the past few months alone, action has been taken one of the country’s most prominent media outlets. In June, executive editor of Rappler, Maria Ressa, a critic of Duterte, was convicted of cyber libel - over a story she did not write, and under a law that did exist at the time the article was published. Meanwhile, the country’s largest broadcaster, ABS-CBN, which has been repeatedly threatened by the president, has been forced off air. Duterte has denied that either of these cases were politically motivated.

Among those challenging the anti-terror law are Christian Monsod and Felicitas Arroyo, who were part of a commission that drafted the 1987 Constitution. Several more groups are expected to file petitions.

The vast majority of supreme court justices are Duterte appointees. “We will push back, we will fight back,” said Olalia.