Mlangeni was the last surviving accused in the historic Treason Trial of 1964, where he was sentenced to life imprisonment alongside Nelson Mandela and five other liberation struggle icons. He died July 20 in his Soweto home at the age of 95. 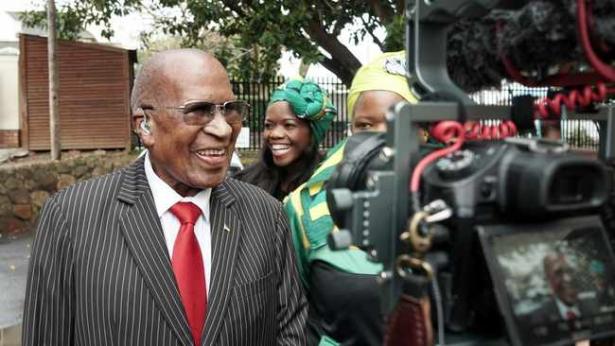 Andrew Mlangeni, among the revered leaders of South Africa’s liberation struggle, liked to refer to himself as the African National Congress (ANC) leadership’s Backroom Boy.  The aphorism became the title of a biography of his exceptional life.

He was a modest, self-effacing gentle man, sentenced to life imprisonment as a terrorist. At the age of 95 when he died in Johannesburg on 20th July, he was the last surviving Rivonia Trialist where he alongside Nelson Mandela had faced a possible death sentence in 1994.

So diligent was Mlangeni in whatever tasks were assigned him – small or big, arduous or perilous - that his comrades-in-arms nicknamed him Mr. Reliable, Comrade Steadfast, Mr Dependability or phrases to that effect. They would slap their thighs, and laugh: “Mlangeni! Man, nothing could stop him once he was seized with a task. You could bet there could only be one outcome – fulfilment of his mission.” The consequence was they dubbed him “Robot”, denoting someone who was remorseless in forward motion.  That was in jest to pull Mlangeni’s leg. No offence taken. The self-proclaimed, Backroom Boy, had a much admired, self-deprecatory sense of humour.

I first met Andrew Mlangeni in Durban, where I worked as a young man at the time, soon after his return from military training in China early in 1963. He was in the company of a tough Umkhonto Wesize (MK) commander, Joe Modise. MK was the ANCs newly formed armed wing. They were collecting dynamite we had “liberated” from a construction site. The one car we of the Durban Command possessed had become too “hot”, and Modise ordered Mlangeni to drive it back to Johannesburg where they would alter its appearance and registration. Something beyond us relative amateurs in Durban. The promise was they would replace it. That never happened.

Years later, after Mlangeni’s 26 year Robben Island “sojourn” where his cell was next-door to Nelson Mandela’s, and the legalisation of the ANC in 1990, he had become transport officer at the organisation’s Jo’burg Headquarters.  I duly approached him and requested a vehicle for my assigned work, which as a campaigns officer required trips all over the country. He looked at me somewhat bemused, explaining that given some time he would see what was possible but there were others who were ahead of me in line for a car. Vehicles and funds were in short supply. Poker faced, I argued that I had been in line from the time of his 1963 Durban trip with Modise and an unfulfilled promise. His eyes twinkled with mirth. “Go tell that to Modise or Mandela if you wish,” he teased. I got my car in due course. But our friendship didn’t count. I had to await my turn. To him principles were fundamental. That went with his integrity. There was no question of favouritism or cronyism.

Born in 1925, he knew poverty and suffering from the start. He was two-years-old when his father died. In penury his mother moved to a shanty town where they dwelt in a tin shack. By the age of twelve he had left school to earn some money from casual chores, including as a teenage caddy on the white players only golf courses of the time (where he learnt his love for the game), then became a factory worker and by his early twenties a bus driver. This was punishing, underpaid work and he was soon involved in leading strikes. By the early 1950s he had joined the ANC Youth League and by 1954 the ANC. He served at Mandela’s side through the mass mobilisation campaigns of the 1950s where the leadership noted how reliable, and diligent he was.

As a result of such qualities he was selected for a year’s military training in China as part of a trail blazing group of six. On returning home he carried out MK operations with distinction until his arrest and indictment alongside Mandela and leading comrades-in-arms at the Rivonia Trial of 1964 and his sentence along with them to life imprisonment. It was partly the hot car that Mlangeni had driven from Durban to Jo’burg that led to his undoing. He was brutally tortured, suffered electric shock treatment, but kept his mouth shut and gave no shred of information away. And the Backroom Boy had plenty of information under his hat.

Fortitude, integrity and fulfilment of the mission was the golden thread that ran through his life. Right to the very end through service as an ANC  Member of Parliament from 1994-2014, Chair of the ANCs Integrity Commission, numerous tasks, deployment and top awards, including Freedom of the City of London – quite a step up for a backroom boy some would say.   For him success and accolades by no means meant that the struggle to eradicate poverty, racism, exploitation and inequality was done with.

He was ready to raise his voice against corruption and strove in his quiet, backroom way, to prevail on the ANC leadership to put the house in order. He understood the reality of an ongoing endeavour; that struggle was never-ending; and of passing on the baton to the next generation. Honesty and service to the people - not greed, material acquisition and self-interest - was his mantra. “Love your country; love your people, fight corruption” was his message in these latter years. As was his thrilled response to the upsurge of the Black Lives Matter rebellion on the eve of his passing. White supremacy had enraged him as a youth. He came to see the devise this was to oppress, humiliate and exploit people of colour.

Despite the years of sacrifice and deprivation he had found time to enjoy life, particularly his marriage to his wife and fellow activist June and the four children he fathered. She had waited faithfully for him all those years of Robben Island.  He loved to quip that she was his second wife; the first being his love for golf.

Tragically she passed on in 2001 and that was a devastating blow. Yet as ever his resilience came to the fore with his irrepressible wit. In his closing years, (he was something of an atheist by the way), he would state that he was looking forward to soon joining her. It was clear that he had no fear of death – whether in the fight against apartheid or the struggle with illness. Perhaps it was the golf which he played with skill until an advanced age, and of course his abiding love of June, that kept up his morale – but certainly it was the years of struggle that shaped him and gave him his fortitude.

One of his last duties, a tribute to his internationalism, was endorsing a solidarity pledge to the People of Palestine, standing with them against the latest Israeli annexation deal of Trump and Netanyahu. Under lockdown my link to Andrew was through his devoted son Sello. We needed some big names and I asked Sello whether he could get his ailing father to agree. In next to no time came back the email with Andrew’s endorsement and that has meant so much to the Palestinian people. It must have been Andrew Mlangeni’s last political act.

We deeply mourn this passing of a gentle giant, a self-effacing Backroom Boy who stood at the forefront of the global people’s struggle for freedom, non-racism, equality, and democracy.

His is a life to celebrate at a rather bleak time. May the example of his dedication serve the cause of justice everywhere in the world as we grapple with the many-sided pandemic of Covid-19, inequality, poverty, injustice and environmental peril. Andrew Mlangeni, Backroom Boy, Comrade Reliable, stands centre stage bathed in limelight - an inspirational beacon of hope for generations to come.

“A giant tree has fallen,” said the ANC in a statement. “The death of Ntate Mlangeni marks the end of a revolutionary life that was dedicated to the struggle for justice and the defense of our freedom.”