Think Federal Cops in Portland are Scary? Cops Use 'Jump-Out Boys' All the Time 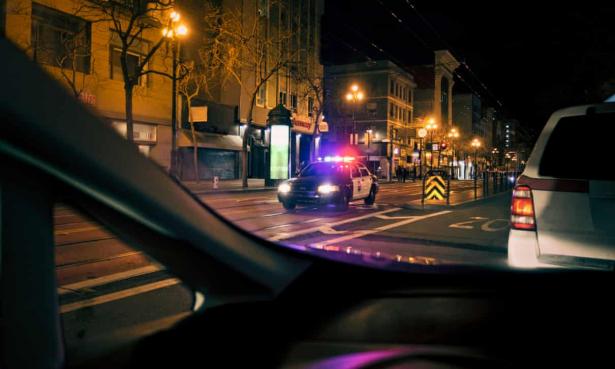 Chicago residents reported that plainclothes units acted like an ‘occupying army’ and made the neighborhood feel like ‘an open-air prison’. , Photograph: Thomas Winz/Getty Images

People in Portland, Oregon, have protested against racism and policing for more than 50 consecutive nights, following the police killing of George Floyd on 25 May. The violence of the police response has further stoked the anger of protesters, as it has around the country.

In response, President Trump has empowered federal agents under the Department of Homeland Security to detain and arrest protesters. Many around the world were shocked when Oregon Public Broadcasting reported that federal agents wearing camouflage were driving around in unmarked vehicles, snatching up protesters and speeding away.

That description sounded all too familiar. We’ve spent much of the last five years reporting on the Baltimore police department. In reporting our new book, I Got a Monster: The Rise and Fall of America’s Most Corrupt Police Squad, we found that police units in unmarked cars have long used terror and confusion to destabilize communities.

During the uprising following the death of Freddie Gray in police custody in 2015, the national guard snatched up one protester and police attacked another on live television. Away from the cameras, we witnessed other agencies with unmarked uniforms rounding citizens onto school buses, for mass detention, often without ever formally charging them.

Even before the uprising, Baltimore, like most American cities, has heavily relied on aggressive police squads to maintain order. Plainclothes police squads – “jump-out boys” – ride around in unmarked vehicles looking for citizens to tackle or throw against a wall, then search for guns or drugs.

Chad Wolf, the acting head of the Department of Homeland Security, recently used similar language on Fox News to describe what is happening in Portland.

“Because we don’t have … local law enforcement support, we are having to go out and proactively arrest individuals,” Wolf said. “And we need to do that because we need to hold them accountable.”

Yet the police themselves are rarely held accountable. “Proactive policing” is, at its core, unconstitutional. These practices presume people guilty and ignore constitutional protections. We, in turn, are all too ready to ignore these violations, especially if the victim has a criminal record and the cops actually find drugs or guns during the search.

The US Department of Justice’s 2017 report on policing in Chicago noted that residents reported that plainclothes units acted like an “occupying army” and made the neighborhood feel like “an open-air prison”. Police in Baltimore, where nearly 80% of the officers do not live in the city, have also been described as an “occupying army”.

Many cities have made a troubling, quasi-fascist trade-off: use terrorizing tactics to heavily police certain parts of the city, in the name of comforting the parts of the city and the suburbs which rarely see plainclothes police.

In June, the New York police department abolished a plainclothes anti-crime unit and reassigned 600 plainclothes officers because of their involvement in a disproportionate number of shootings and their use of “stop-and-frisk” tactics widely considered racist and unconstitutional.

In the New York Daily News, civil rights attorney Joel Berger said he was encouraged by the disbanding of New York’s plainclothes units, which follow an approach “designed as a form of social control to show people in minority neighborhoods who is in charge, just like stop and frisk”.

Even those who support these tactics do not shy from this philosophy. In her 2016 book The War on Cops: How the New Attack on Law and Order Makes Everyone Less Safe, the conservative writer Heather MacDonald argued that proactive policing is a form of “urban reclamation”.

In Baltimore, this kind of policing has been exceptionally egregious. A special plainclothes squad called the Gun Trace Task Force (GTTF) was the subject of a sweeping 2017 federal indictment charging eight detectives with robbery and racketeering charges. All either pleaded guilty or were convicted and are currently serving sentences for widespread violations of constitutional rights. Before they became federal prisoners, however, these were decorated and celebrated police officers who acted precisely as we see Trump’s federal agents acting in Portland.

According to the testimony of squadmate Maurice Ward, Wayne Jenkins, a 14-year veteran who ran the GTTF at the time it was taken down, would make as many as 50 unconstitutional stops a night. Jenkins used a technique he called a “door pop”. When he saw a group of Black men standing at, say, a bus stop, he would speed up in his unmarked car and slam the brakes. Another cop would pop open the door and they would chase and tackle anyone who ran. If the person had a gun, they arrested them. If the person had drugs, they stole and sold them. The police considered these people, a federal prosecutor later said, “beneath the law”.

Wiretaps and trial testimony revealed that because Jenkins wasn’t wearing a uniform or displaying any police identification beyond a tactical vest, he often lied to victims and said he worked for the federal Drug Enforcement Administration (DEA) or the US Department of Justice. In one case in 2016, Jenkins and his squad stopped a man and his wife as they left a home repairs store. They took them to an unofficial interrogation site called “The Barn”, where Jenkins claimed to be a federal prosecutor.

Then members of the GTTF took the couple to their home, in another jurisdiction, and detained them for hours. They found nothing illegal, so they didn’t arrest the couple for any crimes. They did, however, steal $20,000 from them.

Because the man had a criminal record, no one believed him when he said police kidnapped and robbed him. The man’s wife later explained that she didn’t know if the people stopping her were even cops. This is common in Baltimore, where police in cargo pants and sneakers prowl around looking for trouble. Sometimes, members of the GTTF even wore masks so residents they ambushed would think they were criminals. In his guilty plea, Jenkins admitted that when he did this to a driver in 2010, the man panicked and crashed into another car killing its driver. Jenkins and a sergeant planted heroin to justify the chase.

These aren’t isolated examples of “bad apples”. The US Department of Justice report on Chicago cites a case where two plainclothes officers wearing all black approached a couple, who thought they were being robbed and fled. One of the officers shot and killed the man.

Whenever there is a perceived crime spike, calls for proactive policing are renewed. When the NYPD disbanded its plainclothes unit, the police union president, Patrick J Lynch, said that “shooting and murders are both climbing steadily upward, but city leaders have clearly decided that proactive policing isn’t a priority” and they “will have to reckon with the consequences”.

After Freddie Gray’s death, a rise in crime in Baltimore quickly turned the narrative from police reform to tough-on-crime solutions that further empower police. Every time members of the GTFF stole drugs or money, it created a ripple effect of violence. Those who were robbed had to answer to people they owed money or drugs. In one case, GTTF officers stole $10,000 from a man who was later murdered over a debt as he returned home from an appearance in court for the gun they charged him with. Of course, his murder, like those of the more than 300 other Baltimoreans killed that year, further justified increasing police powers – and expanding the police budget.

In Portland, we are seeing the federal version of “proactive policing” sow confusion and chaos – and Trump is betting on the turmoil. Unaccountable police, whether in plainclothes or uniforms, create chaos, which allows authoritarian leaders to argue that we need more police power, the very thing that people in Portland – and across the country – are protesting against.

Trump’s federal police simply expand the definition of who is “beneath the law” so that it encompasses white, middle-class protesters as well as Black and brown people. Now, he’s threatening to send the same shock troops to more cities. But our cities do not need more jump-out boys. They’re teeming with them already, and they’ve already contributed enough chaos and violence.